The Belgian left-back believes the 21-year-old Hoops hitman can develop into a world class striker in the mould of his cousin Romelu Lukaku.

Bolingoli has witnessed his relative grow in stature at club and country level and display the marksmanship that enticed Inter Milan to pay £60million to Manchester United for his penalty-box prowess in the summer.

Edouard hoisted his club tally to 11 for the campaign with a crisp double in the 6-0 runaway victory over Ross County at Parkhead at the weekend. 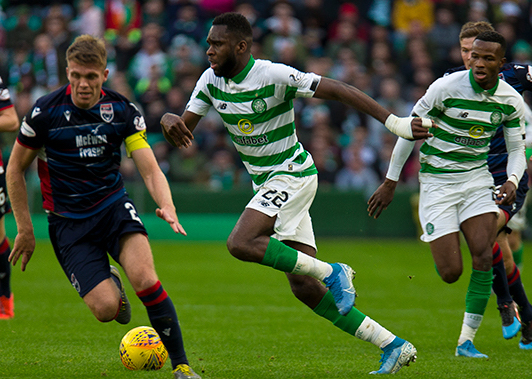 The £9million attacker has also claimed nine in four outings for the French Under-21 international team to make him one of the hottest young forwards in Europe.

Bolingoli, speaking to the Evening Times, said: “For sure he can go to the level of Romelu. Odsonne is still young and is still progressing, but in time, for me, he can become a big striker in the football world.

“The boy has qualities and we have so many qualities in the team to help him. You see how good he is every day. Even with the national team.

“He shows his quality every time he plays and, for me, he is a big talented player and I can only wish him all the best in his career.

“He is going to get better and better.’ 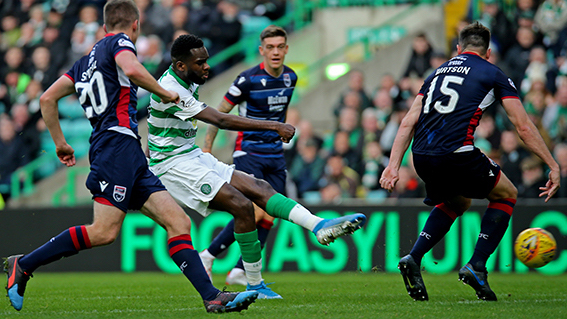 BY THE LEFT…Odsonne Edouard lets fly at the Dingwall goal.

The adventurous left-back, who joined for £3million from Rapid Vienna in the summer, was delighted to hear Neil Lennon insist last week the elegant raider would NOT be sold in the January transfer market.

He added: “Of course, because he is a good friend of mine as well as a team-mate.

“In football, you play with 11 players and everybody is important in the squad.

“I hope we can show we are a team in the next game against Lazio on Thursday that we are Celtic and we can get the three points.”