ODSONNE EDOUARD’S disappointing striking form is underlined by the fact he hasn’t even gone into double figures with the season now in December.

Last season’s top scorer with 28 goals has claimed only eight strikes this time around as he has toiled to maintain his tag as the club’s talisman.

The bewildering dip in the 22-year-old’s performances is a source of amazement and many onlookers believe he is reacting to the failure to land a big-money transfer in the summer.

However, his fellow-Frenchman Christopher Jullien insists that is NOT the case and is certain the enigmatic frontman will recover the touch that prompted the Hoops to splash a club record £9million in bringing him in from Paris Saint-Germain in the summer of 2018 after an original impressive season-long loan from the French giants.

The towering central defender, speaking about Edouard to The Scotsman, said: “His mind is on the field. He is really good in his attitude. 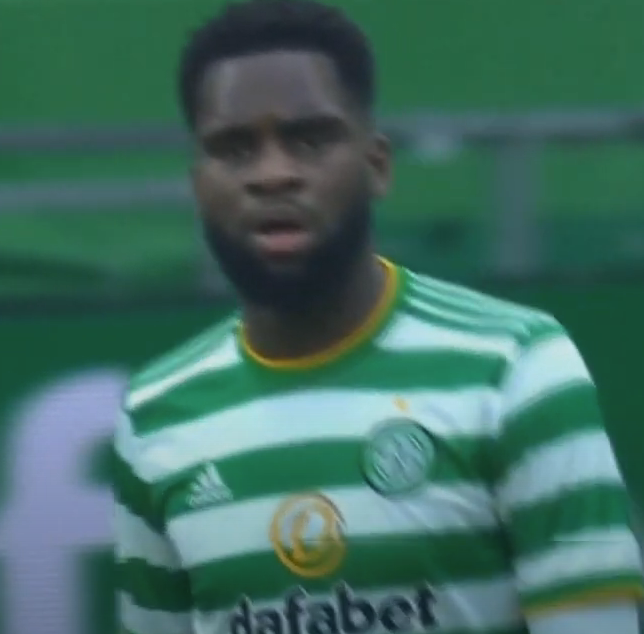 THE FACE OF DEFEAT…Odsonne Edouard struggles against Ross County.

‘He is here to accomplish things for the team. And he knows that, since the beginning of the season, his form hasn’t been the best.

“But we know he has quality. He trusts himself. And he knows that, at one moment, his game is just going to elevate. He knows that he needs everyone on the team to accomplish that, he needs his team-mates just like we need him.

“We just have so much respect for each other. I just think he’s going to blast everyone again, because his talent is unbelievable. We know exactly what he’s capable of.”

Edouard will almost certainly lead the attack in the meaningless Europa League Group H encounter against AC Milan in the San Siro tonight, with a 5.55pm kick-off.

He scored an excellent solo goal a week in the Czech Republic capital before the roof fell in on the visitors with Sparta Prague racking up their second successive 4-1 victory over the Parkhead outfit.

Neil Lennon, Jullien and Edouard realise there is a massive onus on them against the Serie A cracks to produce a more acceptable all-round performance on this occasion.