IT was seven in heaven this afternoon as the champions ran amok in Paradise.

The Premiership title was delivered in some style for the seventh successive season by a relentless Celtic who swept their opponents aside with a performance of high intesity, pure energy, outstanding finishing and a fair injection of quality.

Graeme Murty’s men were put to the sword and must have been relieved the Hoops stopped their goalscoring at five in the 53rd minute.

There was still time for Brendan Rodgers’ Bhoys to rack up a scoreline that would have been even more indicative of their superiority.

It’s the third time the Irishman has seen his side score five goals against the Govan outfit and they had to settle for a 4-0 triumph a fortnight ago in the Scottish Cup semi-final against soundly beaten opponents who now look forward to meetings with their Glasgow neighbours much in the same way the condemned man embraces the firing squad.

The Hoops manager may have looked to have taken a gamble on 20-year-old Odsonne Edouard to lead the attack in preference to the more experienced Leigh Griffiths with Moussa Dembele not deemed quite matchfit.

The young Frenchman repaid that faith with a display that included two goals and a neat pass for another.

Getting on the goal parade were James Forrest – his first against the Ibrox side – Callum McGregor and, almost inevitably, Tom Rogic, who was unstoppable on this occasion.

On a day where it was difficult to choose a top Celtic performer with so many candidates the accolade went to Edouard, last month’s matchwinner at Ibrox, for his poise, pace and power.

GOAL No.1 in the 14th minute was swiftly constructed and devastatingly finished as McGregor played in Tierney on the left. A quick shift of feet, a swivel of the hips and the defender was past the bewildered Daniel Candeias as he scorched his way to the touchline.

A quick look up and then a slick pass low into the danger zone and Dembele would have been proud of the movement of Edouard.

His fellow-Frenchman got in front of Graham Dorrans and applied a lethal finishing touch as he diverted the ball low past the overworked Jak Alnwick.

The keeper, standing in for the injured Wes Foderingham, made a double save as early as the third minute to keep out a rampant Celtic who went for it right from the kick-off.

Alnwick pawed away a right-wing corner-kick from McGregor and the ball fell to Olivier Ntcham who thumped the loose ball towards the net.

The goalie and Andy Halliday managed to block the effort and the ball was hacked to safety. There was a shout for handball from the stand-in left-back, but the referee wasn’t interested. 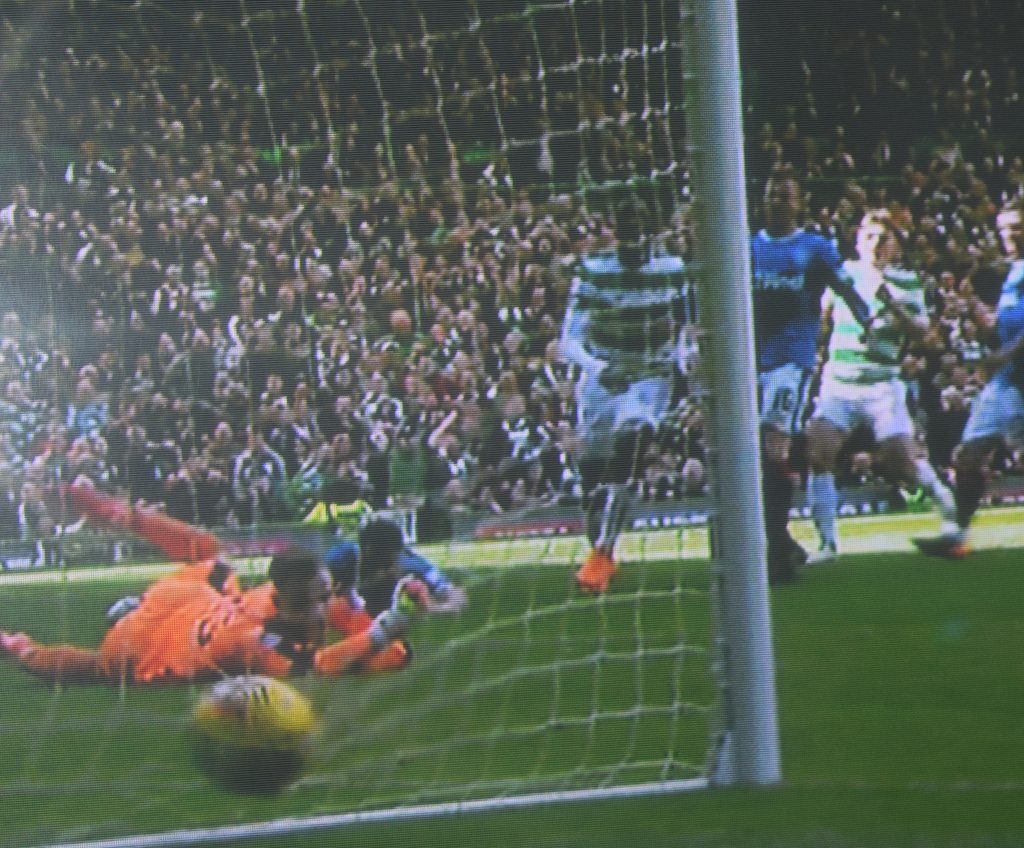 BY THE RIGHT…Edouard slips the second beyond the stranded Alnwick.

GOAL No.2 arrived in the 41st minute and once again it was the energetic and skilful Edouard who applied the finishing touch with breathtaking aplomb.

Forrest slid the ball in front of the on-loan Paris Saint-German frontman and he slickly moved forward at pace.

He bamboozled Russell Martin and Andy Halliday and fired a sizzling low drive beyond the helpless Alnwick at his right-hand post. 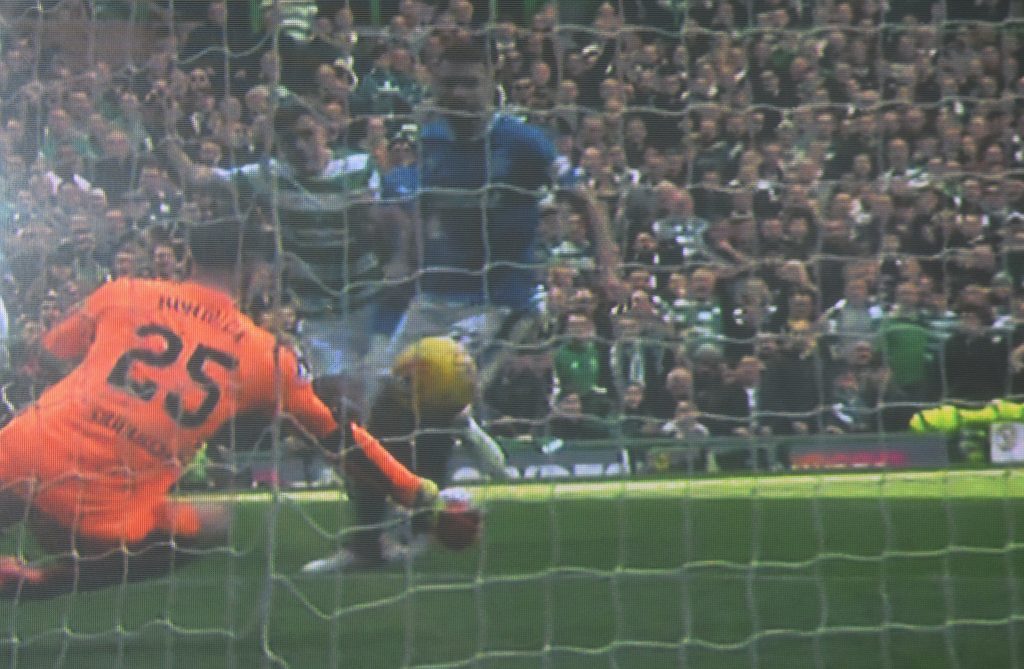 GOAL No.3 came just before the interval and once again the visitors’ rearguard was shredded with some inventive footwork and fine shooting from the ever-dangerous Forrest.

Dedryck Boyata, looking determined and aggressive throughout the 90 minutes, won a ball and pushed a pass in front of the wide Bhoy who scampered at pace towards the danger zone.

He left Jason Cummings in his tracks, weaved away from Jamie Murphy and the harassed Halliday and then zipped another low drive wide of the keeper who made a despairing lunge across his goal in an attempt to prevent the champions taking a three-goal half-time lead.

OZ-SOME…Tom Rogic sweeps in the fourth with the visitors’ defence in disarray.

GOAL No.4 was delivered in the 47th minute as the visitors looked in grave danger of falling apart.

Forrest set up McGregor for a shot, but his effort was blocked and spun clear. Tierney then appeared to be brought down by Candeias, but play raged on and the ball fell perfectly for Rogic.

The Aussie was almost disdainful as he swept the ball into the gaping net with the Ibrox rearguard in tatters. 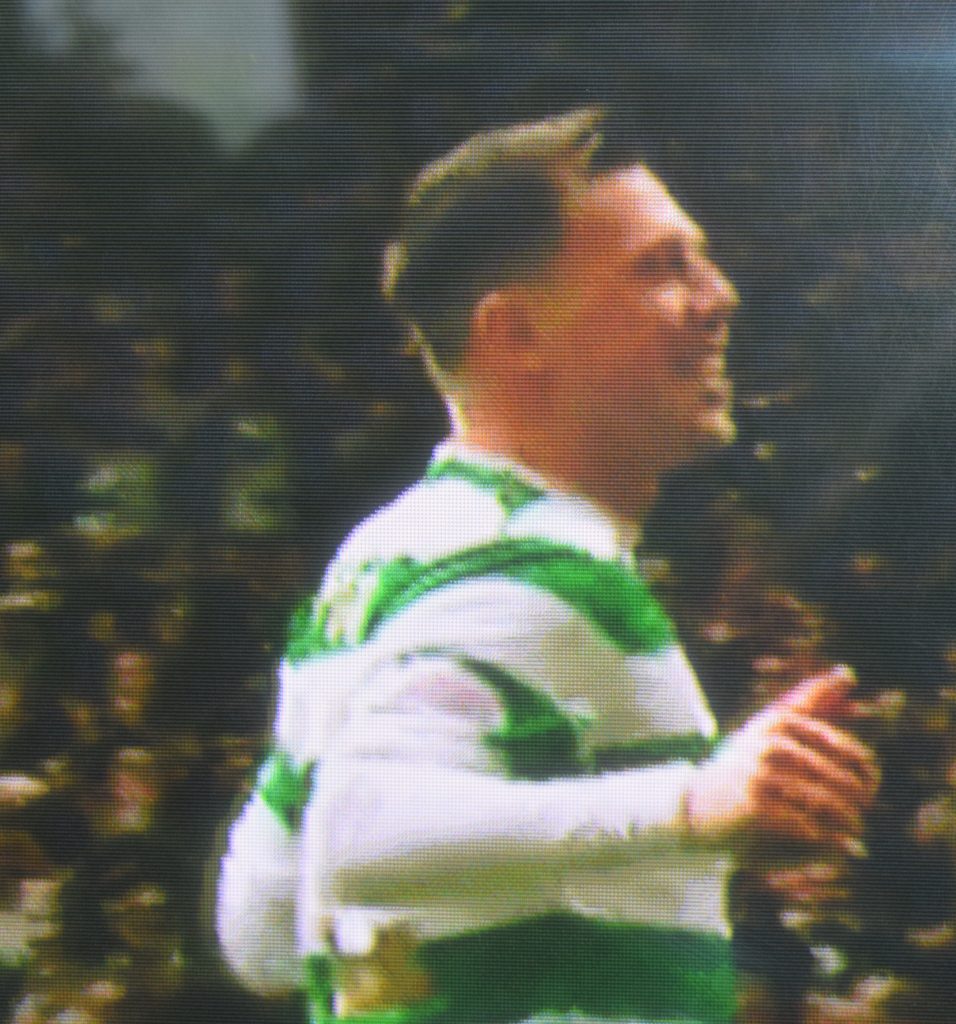 JOY BHOY…Callum McGregor tuns away after the fifth goal.

GOAL No.5 was claimed just six minutes later when Rogic found Edouard on the left as he strolled forward with menace and purpose.

The athletic raider then picked out McGregor and he made no mistake as he rifled the ball beyond the shell-shocked Alnwick.

At that stage, the Celtic fans were wondering when the scoring would stop. Remarkably, Josh Windass rattled the outside of Craig Gordon’s post before normal service was resumed and Alnwick did exceptionally well to push away a drive from Ntcham.

In the 61st minute it was the Ibrox shotstopper to the rescue again for Murty’s ragged team as he got down to his left to divert a Forrest effort.

Alfredo Morelos came on as a substitute to his expected welcome and he had the chance to score, but his effort was blocked by the joint efforts of Gordon and Boyata.

However, in the 64th minute Celtic should have scored a sixth when Forrest retrieved the ball on the touchline and picked out Rogic.

His first drive was parried by Alnwick and it looked as though he had to score with the rebound, but the killer touch deserted him at the crucial moment and he allowed the keeper to scramble the second effort away.

Shiortly afterwards, the Aussie wizard was replaced by Scott Sinclair and then Jack Hendry came on for the limping Mikael Lustig.

Edouard went off to a rousing reception from the grateful Hoops fans and Griffiths made his entrance with 15 minutes still to play.

The pacy hitman is still two goals short of his magical 100 for the club, but he might have edged closer to the century with a bit more care 10 minutes from the end.

A clever header forward from Kristoffer Ajer released him as he sped clear of the tiring Martin. As the Celtic fans anticipated the ball bulging behind Alnwick, Griffiths walloped it waywardly over the bar.

By this time, though, the Magnificent Seven celebrations were underway, skipper supreme Scott Brown was strutting his stuff and the Hoops were moving to within three of 10 in a row.

It’s difficult to see this team failing in their quest for the Perfect 10.