ODSONNE EDOUARD will be at Celtic to lead the historic charge for 10 in a row and will also pay a massive role in the Hoops’ Europa League group this year.

That’s the firm belief of manager Neil Lennon after watching the charismatic Frenchman score the only goal of a tense play-off encounter against Sarajevo in Bosnia last night.

Edouard, who has been at the centre of intense speculation throughout the summer, emphasised his worth to the team when he stabbed in the winner which could be worth around £10million to the Parkhead club in a monumental season.

Ryan Christie, who helped set up the strike, Kristoffer Ajer and Olivier Ntcham all figured in the triumph and, like the team’s top striker, they, too, have been linked with other clubs over the period.

Lennon made the transfer situation clear in the joyous aftermath of a place in Pot One in today’s group stages draw in Nyon, Switzerland at midday.

“We’re very strong on it, we don’t want to sell any of our players — and we don’t need to now. Maybe if we hadn’t qualified it would’ve been something the board would’ve had to look at.

Lennon paid tribute to his players as they snatched the winner they so richly deserved after practically dominating the tie from start to finish. He said: “The goal was really well worked and Ryan made the right decision to take the shot on because of the pitch. 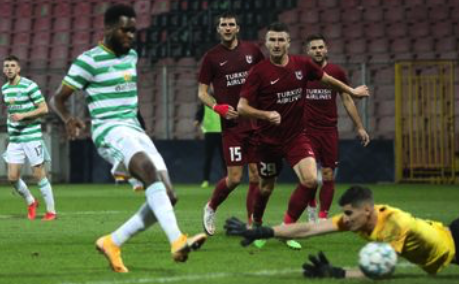 EURO STAR…Odsonne Edouard pounces to score the winner against Sarajevo.

“Anything could’ve happened on that pitch.

“It’s bounced up in front of the goalkeeper, he couldn’t hold it and Odsonne’s showed great striker’s instinct to follow it in and score.

“It’s a huge goal from him and for the club.”

However, there was an injury blow for the Hoops gaffer with the versatile Nir Bitton being added to the casualty list alongside James Forrest and Albian Ajeti.

The Israeli international went down after only seven minutes and looked in distress. He tried to play on, but three minutes was removed and replaced by his compatriot Hatem Abd Elhamed in the middle of the rearguard.

Lennon added: “He has badly twisted his ankle. There’s swelling, so we need to wait and see.

“We can’t diagnose it until the swelling goes down which will take a day or two.

“But he’s out for Sunday against St Johnstone and certainly out of his nation’s qualifiers, as well.

“It’s a pity because he has been playing brilliantly. Hopefully, it won’t be too long, maybe just three or four weeks.”