ODSONNE EDOUARD could sit out the next two Premiership games as Neil Lennon protects the French ace before the Betfred League Cup Final a week on Sunday.

The Hoops boss admitted 14-goal Edouard wasn’t risked in the third and final European section home encounter of the campaign because of an injury “niggle”.

He will be assessed before Sunday’s visit to Dingwall to take on Ross County and Lennon may also consider resting him in the midweek match against Hamilton Accies in Glasgow.

The holders, who have won the silverware in the last three years, are due to play Steven Gerrard’s Ibrox outfit in the silverware shoot-out at Hampden in nine days’ time.

Lennon, speaking to the BBC, said: “We didn’t want to take any chances. 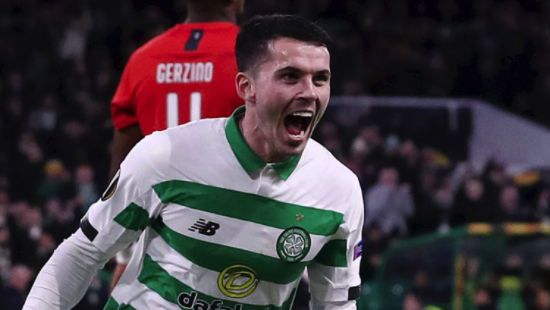 GLEE CLUB…Lewis Morgan shows his delight after the opening goal.

“We’ll see how he is for the weekend. That performance was without Odsonne, so it shows how well we can play.

“Sometimes you have important players missing and that sums up the group at the minute, they’re really in a good place.”

The Irishman pushed winger Lewis Morgan into a central attacking position against Rennes with support from James Forrest and Ryan Christie.

The ex-St Mirren forward, who had scored only one club for the Hoops before last night, responded by siring in the opening goal which was set up by Forrest while Christie netted the second.

Mikey Johnston, on his first appearance since the 2-0 win at Ibrox on September 2, rifled in the third after the break.

Lennon added: “Lewis comes in and he’s a testament to being a really good professional.

“Waiting his time, staying on top of his conditioning and he goes out and plays brilliantly like that.

“We’re all really pleased for Lewis, we knew he could do it. He’s a really fit lad and he’s getting stronger physically. He just needs to believe in himself the way we all do.

“It was a great goal he scored, it was a striker’s goal, a great finish. His all round game tonight was excellent.”