Celtic Quick News on News Now
You are at:Home»Latest News»ELHAMED ON LENNY: ‘I THINK THE GAFFER TRUSTS ME’
By CQN Magazine on 27th October 2019 Latest News

NEIL LENNON faced a major headache in the summer when it was clear Mikael Lustig would be joining Dedryck Boyata in quitting Celtic at the end of his contract.

Filip Benkovic, who had been highly impressive before his injury at the turn of the year, was also on his way from the champions after his season-long loan from Leicester City.

On top of that, fans’ favourite Kieran Tierney moved to Arsenal on the English Premier League transfer deadline day for a record-breaking £25million.

However, the Irishman accepted the challenge of a frantic rebuild of his back-four and three of his close-season recruits – Hatem Abd Elhamed, Christopher Jullien and Boli Bolingoli – featured in the thrilling 2-1 Europa League triumph over Lazio on Thursday night.

The £7million Frenchman took the headlines with his superb 89th-minute headed winner against the slick Italians, but the sell-out audience at Parkhead laso took note of the Israeli’s assured performance at right-back.

Elhamed, bought for a bargain £1.6million from Hapoel Be’er Sheva, is not short on self-assurance as he displayed against the Serie A outfit with an array of tricks and flicks as he dovetailed with James Forrest on the flank.

The 28-year-old Israeli, speaking to the Sunday Mail,, admitted: “Yeah, this is my way of playing. 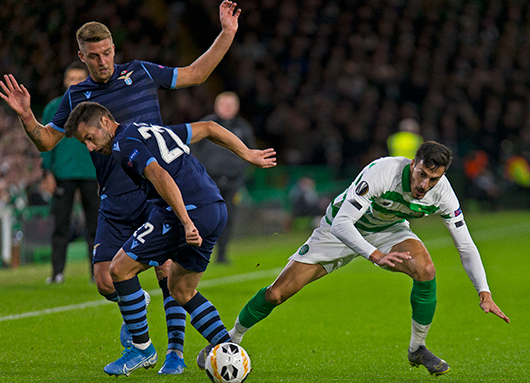 “I have very good technique and my physical level is very high,

“I am also calm on the ball and that has helped me to gain confidence. When I have that confidence I think I am a  good player.

“And I think the gaffer trusts me,  especially in the big games.

“I played two full matches for Israel in the international break so he wanted to give me some rest in the league.

“That is okay, but every player wants to go again, so I am happy with my  performance against Lazio.”

The versatile performer, who is also comfortable in the heart of the rearguard, added: “During the games you get a better connection with each other. You speak a lot during the game, so when you play a lot together you become much better and you see this from week to week.

“Our back-line is now very strong and difficult for opponents to take on. We want to keep it that way.

“And the competition at right-back is very good because it means when you get your chance to play you need to show your quality.

“I’ve tried to play well in every game since I came here. I am happy with that and I want to go again.”