Celtic Quick News on News Now
You are at:Home»Latest News»ELYOUNOUSSI: ‘HE HAS MADE US BETTER,’ BOSS’ VERDICT
By CQN Magazine on 10th November 2019 Latest News

MOHAMED ELYOUNOUSSI has earned praise from Neil Lennon as he settles into life at Celtic.

The Moroccan-born Norwegian international forward was frozed out at Southampton after Mark Hughes, who had paid £16million to bring him in from Basel, was sacked.

Elyounoussi was in danger of becoming one of football’s forgotten men until the Hoops gaffer threw him a lifeline in August and lured him to Parkhead on a season-long loan.

It took the player a couple of games to get into his stride, but, after scoring his first goal for the club in the 2-0 Europa League victory over Champions League conquerors Cluj last month.

He scored two and made two in the Betfred League Cup semi-final victory over Hibs at Hampden last weekend and set up James Forrest for the equaliser against Lazio in the historic 2-1 triumph in Rome on Thursday night.

Lennon, speaking to the Sunday Mail, said: “He has the pedigree and you can see his old instincts kicking in again. He is now up to speed fitness-wise, but he has always been a fit boy, in any case.

“His quality is evident and we’ve watched him grow day by day.

“His confidence is back and there’s no question he has made us better, whether it’s from a central position or coming in off the wing. 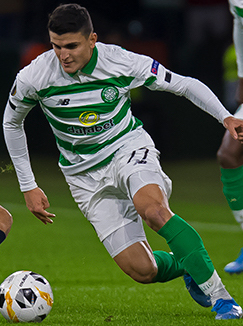 “We’re delighted with him and not just for what he brings to the team, but because he’s a really good lad off the pitch, as well, very humble.

“We don’t want to over-egg his situation, but we’ve spoken briefly about how it was for him before and how this is a great club.

“He’s playing with good players in four competitions and there’s a chance for him to, not re-invent himself, but to get himself back up and running and doing what he’s good at.

“It has worked both ways – we’ve been good for him and he has helped us.

“His movement, vision and link-up play with Odsonne Edouard were all good.

“His passing was off the pace for 15/20 minutes, but then he rattles that one in for James Forrest to score.

“He doesn’t get too disappointed any more if things don’t seem to be coming off for him because he knows he might get another bite at it.

“It also shows in his performances that he’s playing in a team that’s full of confidence.”