Celtic Quick News on News Now
You are at:Home»Latest News»ELYOUNOUSSI IN TROUBLE
By CQN Magazine on 6th November 2020 Latest News

MOHAMED ELYOUNOUSSI is in line for punishment from Neil Lennon after being spotted on his mobile phone following his withdrawal on the hour mark during the catastrophic 4-1 loss to Sparta Prague last night.

The Norwegian international forward, who was the Hoops’ star man the previous week when he fired in a fabulous double in the 2-2 draw with Lille in France, looked aghast when he realised he was being replaced by Leigh Griffiths, who hit the club’s consolation goal.

A clearly unhappy Elyounoussi, who went off while the Hoops were two goals adrift, sat in the Parkhead stand as his team-mates toiled.

The on-loan Southampton left-sided raider was caught looking at his mobile by BT Sport TV cameras and Lennon was visibly angry when he was informed about it during his post-match interview.

The under-fire gaffer warned: “He better not have been. That’s something I’ll deal with.”

The Irishman was supported by his former team-mate, Chris Sutton, who insisted Elyounoussi should cop a fine for his actions. 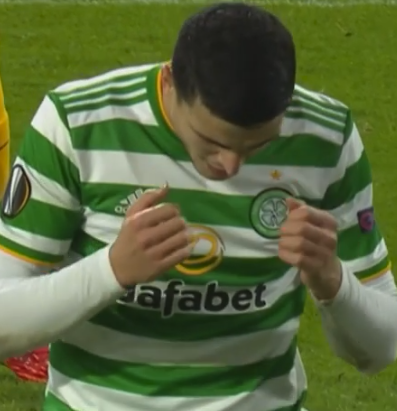 The BT Sport pundit said: “What I question is the player’s commitment. There’s a player this evening sitting in the stands on his phone.

“I’d fine him two weeks wages for that.”

Sutton, who was Martin O’Neill’s first signing for the club in the summer of 2000 when he arrived in a £6million deal from Chelsea, added: “I’ve sat in the dressing room for four or five years with Neil Lennon, I know what his attitude is, I know what he’d feel about that.

“You’re in it together, people talk about team ethic, is that a team ethic?

“That’s a selfish, self-centred, egotistical individual who doesn’t care about the rest of his team-mates.