Celtic Quick News on News Now
You are at:Home»Latest News»‘EMBARRASSING – BUT NOT FAIR TO BLAME MURTY,’ INSISTS HARTSON
By CQN Magazine on 18th April 2018 Latest News

The former Hoops striker, 43, who rattled in eight goals against the Ibrox side between 2001 and 2006, reckons the Scottish Cup semi-final against Brendan Rodgers’ men was too much for them to handle.

Kenny Miller and Lee Wallace are now heading out of the club following a dressing room bust-up with the caretaker boss – as CQN reported yesterday – and the team look to be on a crash course for a spectacular meltdown.

Hartson said: “The performance was just shocking. The Rangers players need to go away and look at themselves. You can point to decisions, the substitutions and having rows – but players have to go and play.

“They showed nothing and they’ve got a lot to answer for. Never mind Graeme Murty. It’s easy to point the the finger at Murty and say he’s inexperienced and he picked the wrong team, but that’s nonsense.

“If you haven’t got that character then you can’t be successful. Look at the characters Celtic have got in that squad – Moussa Dembele, Scott Brown, they have got big characters.

“I looked at Rangers and didn’t see that. These games are generally won with your character. It’s whoever can cope on the big occasion.” 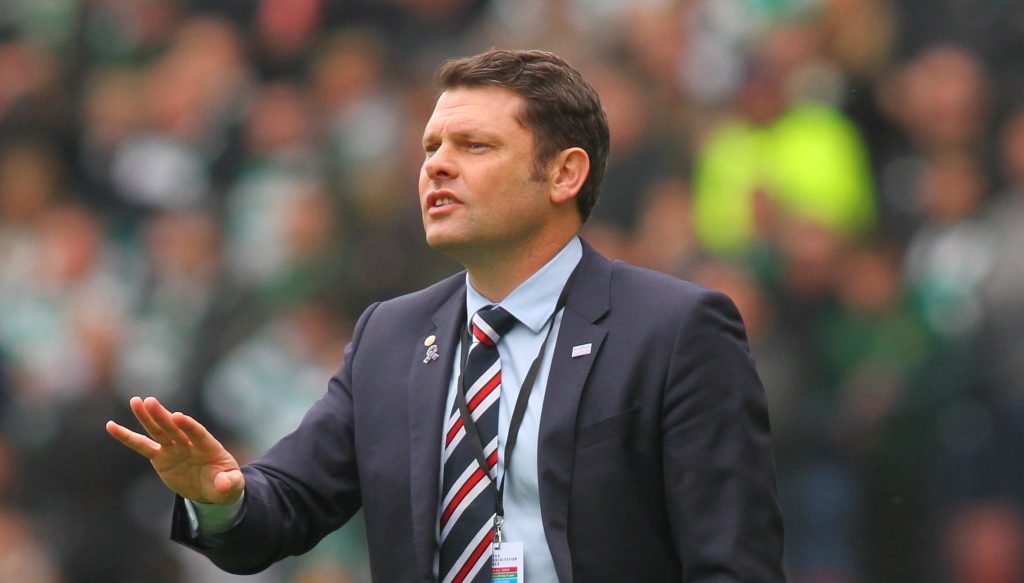 UNDER PRESSURE…caretaker boss Graeme Murty watches his side collapse at Hampden.

Hartson added: “None of them turned up and that’s the problem. In the team I used to play in, senior players like Lenny would let you know in uncertain terms.

“And you haven’t got to be playing well to let people know. When Neil Lennon was having a nightmare himself, which wasn’t very often, he would still point the finger. That’s a good captain. That’s what senior players do.

“There were a few out there for Rangers – but it was a mismatch at the weekend, it really was. Rangers fans have Tweeted me to say their team was dire.

“It could have been seven or eight. They were battered. It was embarrassing. They showed no desire, didn’t even close down. It was as if they were in awe.

“Rangers beat Celtic a couple of years ago when Ronny Deila was the manager. They beat them on penalties, but they never let Celtic settle for one second, from the first whistle they were right in their faces, up against them, showing hard work and commitment. They showed everything that day.

“There was none of that at the weekend. You’re sitting back and going: ‘Is this a testimonial?’ Celtic were bumping it to each other, no-one laid a glove on Scott Brown.”