IN a letter to Jimmy Greaves  at ‘Shoot!’ magazine January 22nd 1983 a Jimmy Campbell from Bathgate, Lothian wrote:

“Because of a few poor results, there is now pressure on the directors of Rangers to allow Catholics to play the club.

“I am sure I speak for many thousands of Rangers fans when I say that I sincerely hope the directors do not change the policy of this great club.”

Greaves probably couldn’t believe what he was reading. He replied as follows:

“Celtic play Protestants and are running away with the Scottish Championship. Rangers don’t play Catholics and are struggling in mid-table. If I found a player who’d score 25 goals a season I’d put him in the team if he was a Catholic, Protestant, Buddhist, Jewish or Hindu.”

We have no details on what the Bathgate bigot thought of Greaves’ reply but can guess that he said, ‘No surrender, WATP,’ then went down to John Menzies to cancel his copy of ‘that Fenian rag Shoot Magazine.’

Rangers won 13 of their 36 league matches that season. They lost 11 times and had 12 draws. Their Protestant only team scored a mere 52 goals and conceded 41 times.

Greaves scored 44 goals in 57 appearances for England. He is in fourth place on the all-time list of England goalscorers, behind Bobby Charlton, Gary Lineker and Wayne Rooney. Greaves holds the record for most hat-tricks for England – six in all. 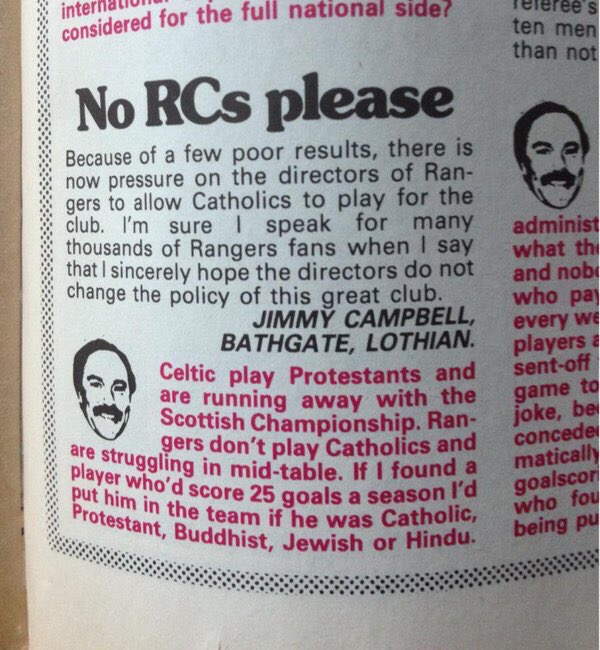