CELTIC kick off their Champions League Group C campaign in Barcelona on Tuesday evening and the Celtic support is looking forward to the challenge of facing superb sides from Spain, Germany and England.

It’s going to be tough but we wanted our club to be at the top table and hopefully we will be able to once again punch above our weight against these clubs all of whom are laden with rich pickings from television companies.

We started a series last week looking back at Celtic’s English opponents in Europe and covered the first three ties, one a decade in the 60s, 70s and 80s. We’ll also have a look at our games against Spanish and German sides over the next few weeks.

In these six matches Celtic won 3, drew 1 and lost 2 but were eliminated on two occasions. All matches were close affairs with Celtic notably playing well in the away ties.

Here are the features from last week for you to have a look at.

The next time Celtic met English opposition in Europe was in September 1997.
This time it was the in UEFA Cup 1st round and our opponents were once again Liverpool. Much of the period between the Nottingham Forest clash and this game had mostly been a bleak for our club. During that 14 year spell, we’d won only 2 Leagues, 4 Scottish Cups and had failed to win any Scottish League Cups. Rangers had just completed 9 in a row. Celtic were, sadly, no longer a force in Europe. However, the awful days of Brady and Macari’s management were in the past. Tommy Burns had built an excellent team but he was only given 3 years and was dogged by bad luck. He had been dismissed a few months earlier following a Scottish Cup semi final defeat against Falkirk. Wim Jansen was now in charge. 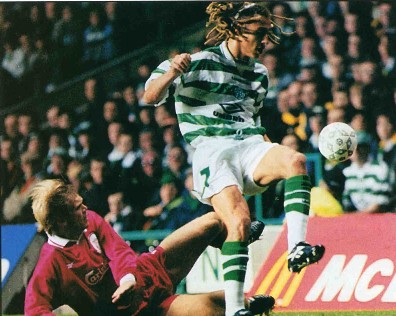 Despite having quality players like Boyd, McNamara, Stubbs, Larssen and Wieghorst, Celtic went into the first leg at Celtic Park as massive underdogs. Celtic got off to a disastrous start, with lethal Liverpool striker, Michael Owen, scoring an opener in the 4th minute.
For the next half hour, Celtic looked lost and the English team were in total command. However, Celtic took heart from the fact that Liverpool failed to add to their lead. Celtic showed great spirit and skill and, in the second half, hauled themselves back into the game. First Jackie McNamara equalised in the 53rd minute. His shot looped over goalkeeper James.
Then  Simon Donnelly put away a penalty in the 74th minute, to give Celtic the lead. Donnelly had been Celtic’s top performer in the second half. Shortly before his penalty, he saw a shot come off the bar. Celtic were playing superbly and seemed set to approach the away game with a lead. However, in the last minute, Steve McManaman, a very highly rated player who had been invisible for much of the game, got the ball. He received Paul Ince’s pass 20 yards inside his own half, beat Morten Wieghorst with his first touch, then glided past half the Celtic team. He was not even tackled before he drilled a left foot shot just inside the far post. 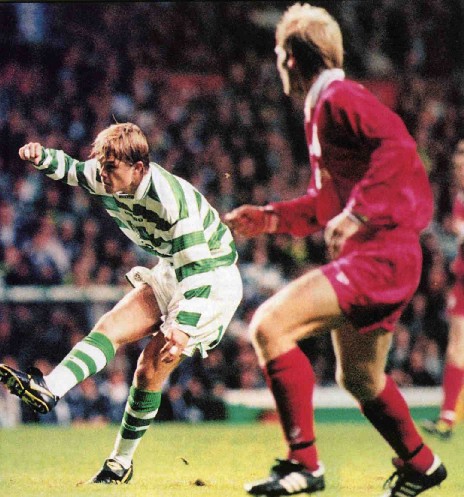 The last minute McManaman goal meant that Celtic had a mountain to climb at Anfield on the last day of September. The pre match situation looked bleak from a Celtic perspective. Marc Reiper, as he was in the 1st leg, was ineligible and Tom Boyd was suspended. Phil O’Donnell had a calf strain and Andreas Thom was out with a muscle injury. In addition, Wieghorst was carrying  a knee injury and Mahe was recovering from a calf injury. However, both of these players started.
As they had done 2 weeks earlier, both sets of fans sportingly joined each other for a stirring rendition of ‘You’ll Never walk Alone.’ Unfortunately, the curse of the away goals rule damaged Celtic yet again.
On the night, Celtic were the better team. Celtic performed with great passion and courage. The adventurous play certainly merited a victory. However, Liverpool managed to hang on for the goalless draw that saw them safely through to the next round.
Simon Donnelly, who had  an excellent game, missed a great chance in the first half. Celtic ripped the Liverpool defence apart. Larsson started the move by switching  a pass on the left flank to Tosh McKinlay, who then fired a great ball over Liverpool’s central defenders, Babb and Kvarme. Liverpool goalkeeper, David James, read the situation and came to collect the ball ahead of Donnelly. However, he collided with team mate Bjornebye and dropped the ball. Donnelly pounced but, with the goal at his mercy, his lob drifted agonisingly over the bar.
For the rest  of the first half, Celtic were totally dominant. Celtic were denied what seemed a certain penalty on the half hour mark. Stubbs headed Burley’s free kick towards Donnelly, who rose with James. The ball spun away from both of them and dropped perfectly for Wieghorst, who sent a thundering shot towards goal. It seemed to be blocked  by the hand of  Norweigan Bjornebye. The Celtic players screamed for a penalty but German referee Steinborn ignored the pleas.
The pattern at the start of the second half was similar, with Celtic looking very dangerous. Donnelly missed another great chance after Larsson had set him up. However, after the 70th minute, Celtic tired, due to the effort that had been been put in. The game ended with no goals and Celtic were unlucky to have been eliminated.
After the match, Celtic manager Wim Jansen said that, “we certainly had more chances than Liverpool.” Liverpool manager, Roy Evans, was full of praise for Celtic said that, “Celtic are a far better team than many people down here think.”
Same as it ever was Roy.
NEXT up is Celtic’s meetings with Blackburn Rovers in the Men Against Boys matches.
Written by Hugh Gallagher for CQN.