Celtic Quick News on News Now
You are at:Home»Football Matters»ENGLISH OPPONENTS IN EUROPE: NOTTINGHAM FOREST 1983
By CQN Magazine on 3rd September 2016 Football Matters
YESTERDAY in Hugh Gallagher’s series on Celtic’s English opponents in Europe, he looked back to 1966 and the Cup Winners Cup semi final against Liverpool and the 1970 clash in the European Cup semi final against Leeds United.
The next time Celtic were involved in a ‘Battle of Britain’ was in 1983 against Nottingham Forest in the UEFA Cup 3rd Round.
Forest were managed by the legendary Brian Clough, who had worked wonders by leading the unfashionable East Midlands team  to European Cup wins in 1979 and 1980. Many of the players who had played in their winning teams had left but  Anderson, Bowyer, Wallace and Birtles were still there. Clough had introduced exciting young players, like Fairclough, Davenport and Hodge, so they were a formidable team. 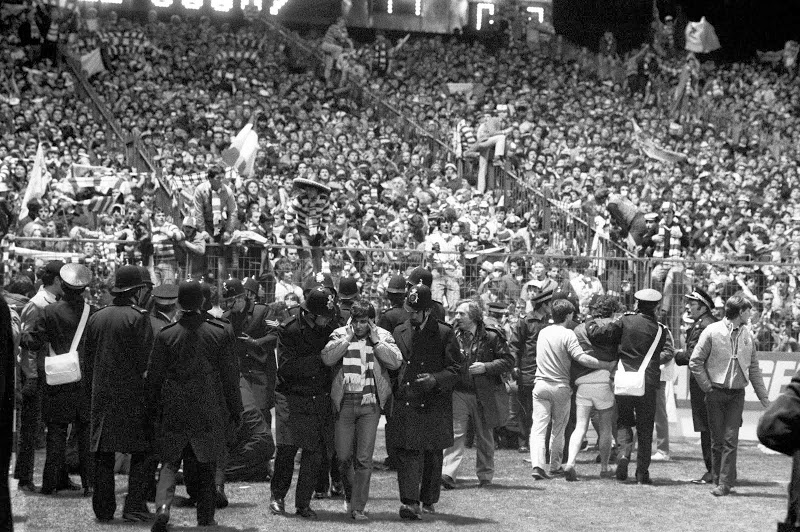 Celtic had unexpectedly lost manager Billy McNeil a few months earlier, Charlie Nicholas  had left and Celtic had been pipped by Dundee United in the League Championship, after having been in a commanding position. However, Davie Hay had come in and had Celtic playing excellent football.  In the previous round of the UEFA Cup, Celtic had crushed an excellent Sporting Lisbon team with a 5-0 second leg victory. This was a team that contained several of the Portuguese national team who would go on to play so well in the 1984 European Championships.
When the game under way in Nottingham, it was the home team who settled first. Gary Birtles got round the Celtic defence in the opening minutes and only a superb Packie Bonner save prevented a goal. Forest were dangerous for  the rest of the first half. 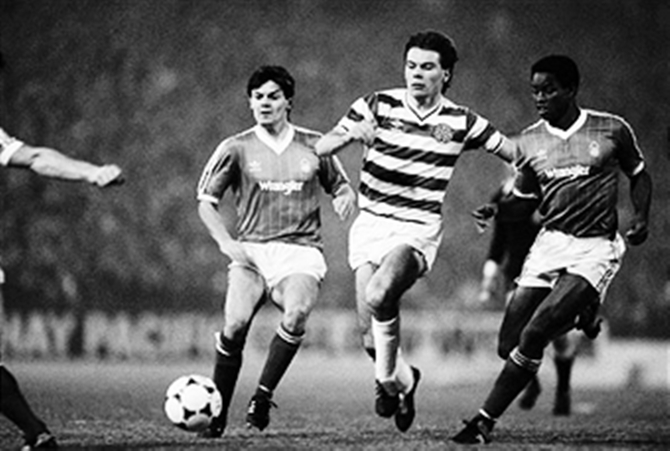 However, the second half was different. Celtic controlled the midfield for long spells with Tommy Burns and a very young Paul McStay in  impressive form. Danny McGrain also had a stand out performance. Roy Aitken almost scored with a 35 yard shot, then Burns struck a 25 yarder that hit the bar. In the last minute, Paul McStay, the best player on the pitch, blasted a the ball over the bar from 12 yards with the goal at his mercy.
Despite the favourable score from the first leg, Celtic were aware that Forest, under Clough’s shrewd and inspirational management, would still be very dangerous opponents. Like most European nights at Celtic Park, the atmosphere was electric. Forest were welcomed by 67,000 fans, the first sell out since the Real Madrid match of 1980.
Celtic started well but a bad refereeing decision in the 30th minute was to prove to be decisive. A certain penalty was refused by the Swiss referee, Danan, after Paul McStay had been fouled in the penalty area. The first half ended with Celtic on top but it was obvious that the injured Davy Provan was being badly missed, as Celtic’s play lacked width.
One of Forest’s strengths was their speed and accuracy on the counter attack and, in the second half, they used that tactic to great effect. First Hodge, in the 54th minute then Walsh  20 minutes later, hit Celtic on the break. The tie was effectively over and a late Murdo McLeod goal was no more than a consolation goal.
ENGLISH OPPONENTS IN EUROPE: LIVERPOOL 1966 – read HERE.
ENGLISH OPPONENTS IN EUROPE: LEEDS UNITED 1970 – read HERE.
Written by Hugh Gallagher for CQN.