The 26-year-old Scotland international is on his way out of Parkhead in the summer before his contract expires at the turn of the year, as CQN reported last month.

Christie can walk for free in January and will be allowed to talk to interested clubs next month.

The Highlander, who cost £500,000 when he arrived from Inverness Caley Thistle in 2014, has stubbornly resisted offers of an extension in terms with the Hoops. 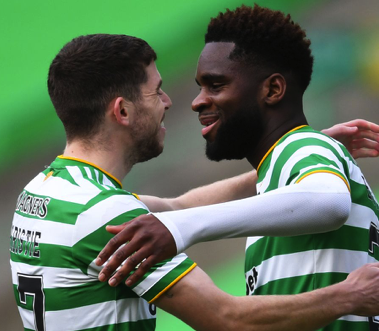 TWO FOR THE ROAD…Ryan Christie and Odsonne Edouard are heading for summer exits.

The St Mary’s club could move to the front of the queue with Christie possibly getting the chance to team up with his former Parkhead colleague and close friend Stuart Armstrong, who joined the south coast club for £7million in 2017.

Celtic will be forced to accept a cut-price fee for the player, according to the Scottish Sun on Sunday. The gifted playmaker could become a key man for Steve Clarke’s side in the Euros with group games coming up against the Czech Republic, England and Croatia.

Southampton, of course, have done business with the Parkhead club in the recent past by signing players such as Fraser Forster, Victor Wanyama and Virgil van Dijk as well as Armstrong.