But the Celtic manager also praised the Belgian’s “character” as he reflected on the champions’ 5-2 mauling of Motherwell at Fir Park yesterday.

Bolingoli has had a shaky start to his career at Parkhead as he has been tasked to be the immediate successor to £25million Kieran Tierney following the fans’ favourite’s record-breaking move to Arsenal during the week.

The defender produced a mixed performance against Stephen Robinson’s side as he was posted missing when a long diagonal cross found Declan Gallagher on the right and he was allowed to nod the ball into the tracks of Liam Donnelly who scored with a crisp low shot from the edge of the box that might have been handled better by Scott Bain. 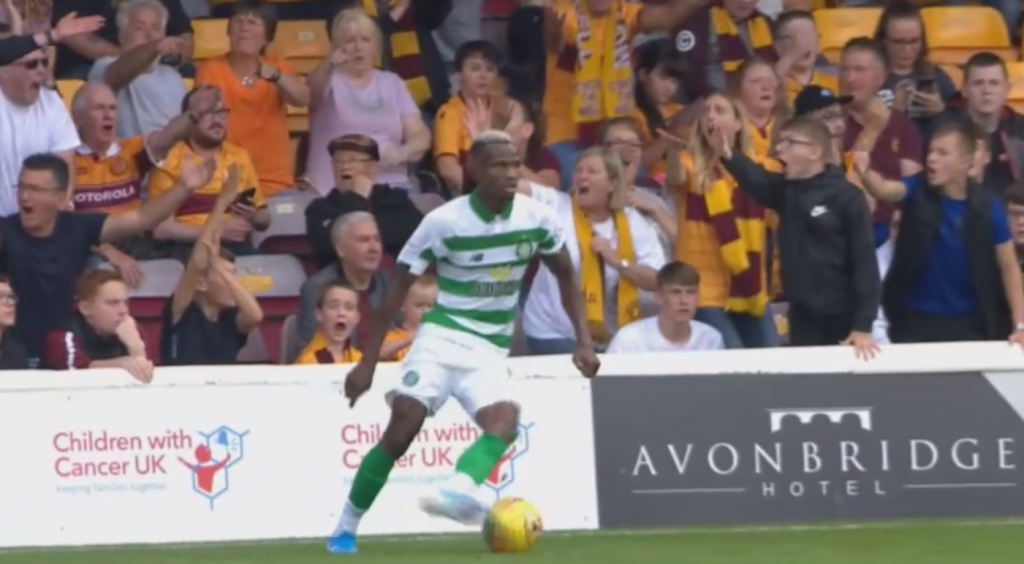 IN CONTROL…Boli Bolingoli ignores protesting Well fans as he prepares to help set up the fourth goal.

Bolingoli recovered from a nervy first-half to produce a more polished display after the turnaround where he set up Forrest for the third goal and was involved in the lead-up play for Edouard’s strike for the fourth.

Home fans screamed for handball as he dealt with a high cross on the wing, but TV pictures clearly showed it was not intentional and the 23-year-old was allowed to play on and pass to Olivier Ntcham on the left who picked out his fellow-Frenchman with an exquisite delivery across goal and the Hoops’ record signing applied an accomplished finishing touch.

Lennon acknowledged Bolingoli is “under the spotlight” seven games into his career at the eight-in-a-row champions.

The Irishman, speaking to BBC Sport, said: “I’m delighted with him. He’s shown a lot of character.

“He’s still trying to find his feet, but as the games go on he is getting better. There were a few erratic moments we’ll hopefully iron out. He can be delighted with his second-half performance.”

Bolingoli is likely to be in place again when Lennon’s men prepare for the crucial Champions League third round second leg qualifier against Cluj on Tuesday after the 1-1 draw in Romania during the week.