FORMER Celtic goal hero Chris Sutton reckons Kristoffer Ajer and Jack Hendry will be put to the test against Rosenborg on Wednesday.

Brendan Rodgers has problems to solve in central defence and the youngsters – 20 and 23 respectively – are standing by to form a partnership in the first leg of their Champions League second round qualifier at Parkhead.

The Hoops boss will be without the banned Jozo Simunovic, Dedryck Boyata is on a break after his involvement with Belgium in the World Cup Finals and Marvin Compper – “a disaster,” according to Sutton – is injured again.

The ex-striker, Martin O’Neill’s first buy for the club in the summer of 2000, said: “There’s been a lot of talk about potential when it has come to Kristoffer Ajer and Jack Hendry.

“Now is the time for the pair of them to make it a reality.

“Thanks to Jozo Simunovic’s brain freeze against Alashkert, Celtic are back in familiar territory in the Champions League qualifiers and looking desperately light at the centre of defence.

“It was the same in Brendan Rodgers’s first season when he was forced to chuck in Eoghan O’Connell and Lustig as a partnership in Astana. 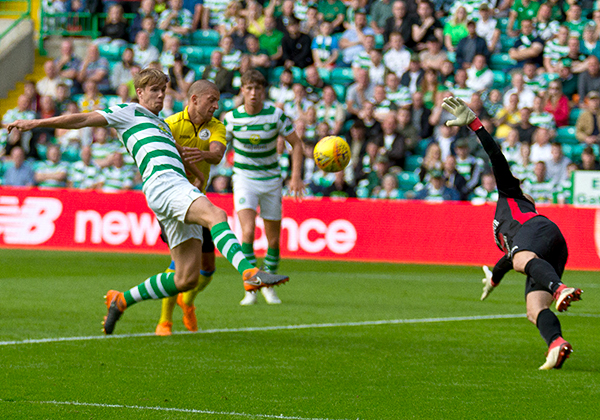 SO CLOSE…Kristoffer Ajer puts pressure on the Alashkert defence in midweek. Jack Hendry looks on.

“It was the same story last season when they ended up with Nir Bitton having to play centre-back alongside Ajer in Kazakhstan.

“Now they will need to rely on a couple of rookies in the first leg against Rosenborg.

“Good luck to them. They should see it as a huge opportunity to justify the hype.

“It’s down to these two and now we’ll see if all these rave reviews about the pair are justified. Rosenborg might not be great, but they are Norwegian champions and are no mugs.”

Sutton added: “Ajer has improved in the last 12 months. He’s composed on the ball and could have a bright future.

“Hendry enhanced his reputation when away with Scotland in Mexico and looks to have the height, physicality and confidence you want.

“But, as far as I’m concerned, the jury is still out on them. Next week’s first leg is the idea chance to make their case.

“Don’t get me started on Marvin Compper. He’s been a disaster.”