SCOTT BROWN insists qualifying for the Champions League group stages is like a trophy success for Celtic.

The 34-year-old Hoops skipper issued the rallying call as the Hoops prepared for the first leg of their crucial third round hurdle against Cluj in Romania tomorrow night.

The Parkhead men are attempting to make it through to the cash-rich stages of Europe’s elite tournament for the third time in four years after last season’s disappointment when they toppled at the play-off round against a mediocre AEK Athens outfit.

A goal from Callum McGregor gave Brendan Rodgers’ side an early lead in Glasgow, but the Greeks came back to salvage a 1-1 draw and won 2-1 in the return on home soil. They lost all six of their group stage encounters. 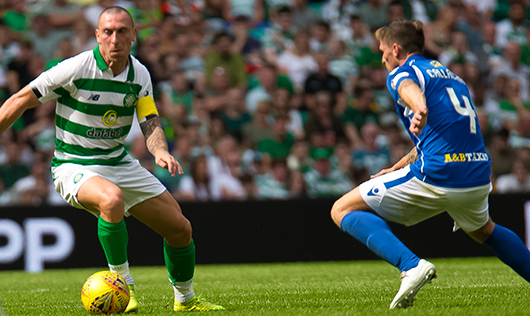 Brown is aware of the dangers posed by Dan Petrescu’s Romanian champions and is determined there will be no banana skin this time out as they face two tough home-and-away ties with Slavia Prague awaiting the winners.

The influential club captain, speaking in the Daily Record, said: “Getting to the Champions League is like winning a trophy for us.

“The manager calls it the fourth trophy of the season. Everyone knows how hard it is, you are up against top quality sides in the qualifiers.

“The game on Wednesday will be huge for us as it’s going to get harder and more difficult now.

“We’re expecting that, but we’re up for the challenge. We have terrific home advantage and our 60,000 fans make this a very intimidating place.

“The away leg first is always best. I always prefer home advantage in the second game. If you go there and come back with a result, you know you are coming back to your own fans.

“But you need to go away from home, as well. We’ve had two good results so far, but we need to keep improving.

“We’ve got the Champions League, the league starting and the Betfred Cup. The games as going to be coming thick and fast.”

Celtic go into tomorrow’s confrontation with a 100 per cent record in their previous qualifiers, winning 5-2 on aggregate against the Bosnians of HK Sarajevo and 7-0 overall against Estonian champions Nomme Kalju.

The second leg against Cluj will be at Parkhead a week tonight.