Celtic Quick News on News Now
You are at:Home»Football Matters»EURO MISERY FOR VAN DIJK AND VAN PERSIE
By CQN Magazine on 14th October 2015 Football Matters
IT was a night of misery for former Celtic centre-half Virgil van Dijk and Europa League rival Robin van Persie as Holland failed to qualify for next summer’s European Championship Finals in France.
Making matters worse, it was the Fenerbahce striker who scored the winning goal for the Czech Republic in their 3-2 win in Amsterdam last night.
The Dutch knew only victory would do and even then they needed Turkey to lose to Iceland to clinch third place and a play-off spot in Group A.

Goals from Pavel Kaderabek and Josef Sural, however, put the Czechs 2-0 up inside half-an-hour before they were reduced to 10 men when Marek Suchy was sent off before half-time. Holland, though, failed to capitalise.

Former Manchester United superstar Van Persie, on as a substitute in the 38th minute, headed home an own goal to put the result beyond doubt, before Klaas-Jan Huntelaar and Van Persie scored late consolations.

The Dutch now join Gordon Strachan’s Scotland among the also-rans and it’s the first time they have failed to qualify for a major tournament since they missed the 2002 World Cup. 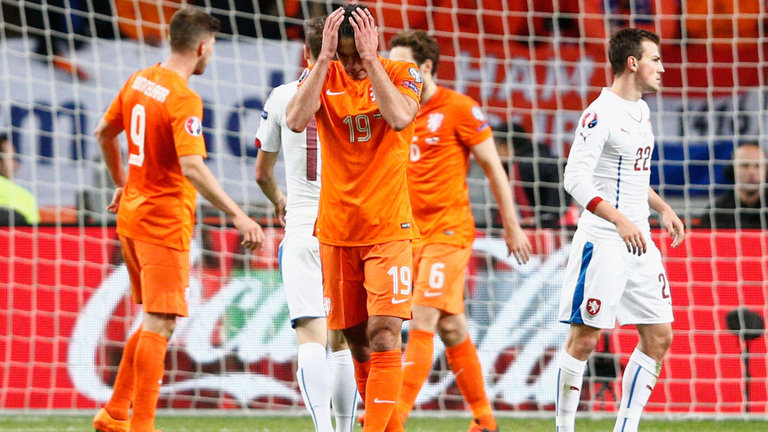 Holland and Van Dijk were not helped by a nervous display by keeper Jeroen Zoet who was caught flat-footed as Van Persie attempted to cushion a headed passback that beat him for the winner.
The ex-Celt, who joined Southampton in a record-breaking £13million deal in the summer, failed to prevent a run from Sural who ghosted past the central defender to score the second goal.
Immediately, Van Persie was thrown into the fray and hopes of a comeback increased when Suchy was sent off just before the break, after bringing down Memphis Depay when the forward appeared to be in on goal.

Instead, however, it was the Czechs who piled on the misery as Van Persie put the ball in his own net in the 66th minute.

The Dutch were third-placed in the World Cup in Brazil 2014 after beating the host nation 3-0 in their last game.
Van Persie has had a torrid time since joining the Turks where he is reported to be picking up £3.5million per year.
Celtic are due to face Fenerbahce on December 10 after drawing 2-2 in the first meeting in Glasgow at the start of this month.
Click Here for Comments >
Share. Twitter Facebook Google+ Pinterest LinkedIn Tumblr Email
Previous ArticleCELTIC SHAREHOLDERS WARNED OF FRAUDSTERS
Next Article JOHANSEN FACES PLAY-OFF