CELTIC’S Europa League Group E rivals Lazio have been hit by an injury setback before Thursday’s clash at the Olympic Stadium in Rome.

Star striker Ciro Immobile, who came on during the second-half of the Hoops’ 2-1 win last month, scored as his side defeated AC Milan in their weekend Serie A encounter.

However, the international frontman took a knock and had to be replaced in the latter stages. 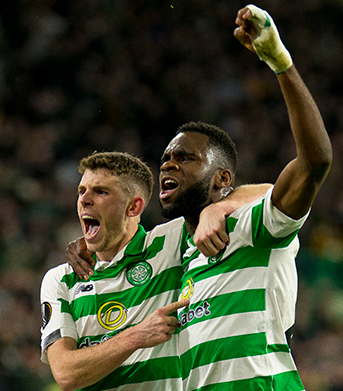 TWO FOR THE ROAD…Ryan Christie and Odsonne Edouard celebrate the first goal against Lazio last month.

And reports in Italy suggest he could miss out on the visit from Neil Lennon’s men who sit on top of the section with seven points from three games after wins over Lazio and Cluj and a draw with Rennes in France.

Head coach Simone Inzaghi could take precautionary measures by leaving the talented ace out of the European confrontation.

He told Rai Sport: “He had a small problem with his calf and I know how committed he is. I saw he was unsure when hitting a shot and I couldn’t keep him on the pitch even if, being committed, he didn’t want to come off.”

Immobile grabbed his 100th goal for the club in the exciting triumph over AC Milan with Joaquin Correa scoring the points-clincher late on after Bastos had scored an own goal.

Ryan Christie and Christopher Jullien were the men on the mark to give Celtic their triumph over the Italians in Glasgow after Manuel Lazzari had opened the scoring.