WHEN Mohamed Elyounoussi smacked in the second goal against Cluj in the 2-0 win last night, the on-loan Norwegian striker was claiming Celtic’s TWENTY-FIFTH strike in European competition this season.

Odsonne Edouard had opened the scoring in the first-half after a speedy, flowing move that saw Scott Brown roll the ball to Callum McGregor for the midfielder to send an exquisite pass to Boli Bolingoli on the left for the Belgian to pick out the lavishly-gifted French attack-leader to head home from six yards.

The former Paris Saint-Germain prospect, the most expensive player in the club’s history at just over £9million, has now scored in five of his last six appearances at Parkhead in all competitions, netting six goals. 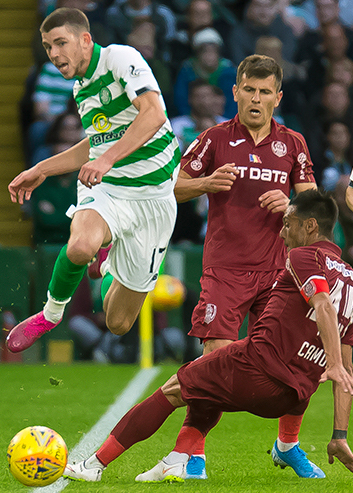 JUMP FOR JOY…Ryan Christie skips over a Cluj challenge.

While Neil Lennon’s men have piled up the goals, the defence have only conceded nine goals, shared among three different keepers – Scott Bain, Craig Gordon and Fraser Forster.

Bain has conceded seven – five over two legs against Cluj – and Gordon one against AIK Stockholm and Forster one against Rennes a fortnight ago in the 1-1 draw in France.

* SINCE losing 4-3 to Dan Petrescu’s Romanian champions in August, the Hoops have remained unbeaten in their following 11 games in all competitions, winning nine and drawing two.

* CELTIC’S 2-0 win over Cluj was their biggest European group stage win in Glasgow since beating Rennes 3-1 in the Europa League in November 2011.

* THE Hoops have four points after their first two group stage matches; their joint-best start to a campaign in the competition since 2014-15, which was also four points.

* CLUJ have lost away to a British side for the first time since December 2008 – a 2-1 defeat against Chelsea – after winning in each of their previous two trips.