CELTIC’S profile on the international stage shines brightly these days.

Last week the Celtic support won the presitgious FIFA Best Fans Award for 2017 in recognition of the display for the Lisbon Lions on trophy day against Hearts at Celtic Park in May. This of course was only one aspect of the brilliant efforts by both the club and the supporters to celebrate the achievements of the Lisbon Lions, who incidentally aren’t restricted in numbers to just the 11 players on the park.

Players like Charlie Gallagher, Mr Kelly, are very much Lisbon Lions and will be celebrated and appreciated by the support for a long time to come, unlike yourself and your families that nearly destroyed our club. We’ll write about this in more detail later today, for those of you who don’t get the significance. 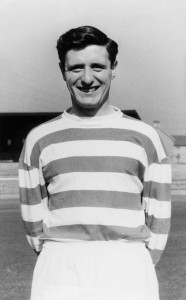 Tomorrow night Bayern Munich are in Glasgow and Celtic Park will once again on the 67th minute, light up for the Lisbon Lions. It will be a scene watched in awe around the World.

Brendan Rodgers has spoken about the very special atmosphere at Celtic Park on European nights and you can read about this on CQN this morning HERE.

On Saturday Celtic matched the British record for consecutive unbeaten domestic matches, which was set by Willie Maley’s Celtic side between 1915-17. No side could match this record since, not our own Lions, or the Liverpool sides that won European Cups, Clough’s Nottingham Forest or Alex Ferguson’s Manchester United. None of them could but Brendan Rodgers’ Celtic, with one win at the start from Ronny Deila’s side, did so on Saturday.

It is a remarkable achievement.

Plenty had left Celtic Park by the time the final whistle went and the record books could officially be updated. Many of the Sunday papers were more concerned with Kenny Miller returning to the Sevco team at Murrayfield than the achievement that Celtic had earned with the 1-1 draw with Kilmarnock.

This morning Eurosport have paid a nice tribute to Celtic. It’s not something that you’ll see in the Scottish media, so it is a refreshing thought to realise that this Celtic side is being noticed and appreciated outside of Scotland.

Congratulations to @CelticFC for levelling a year old record… originally set by themselves! pic.twitter.com/anC2z0Ya33