JAMES FORREST has admitted Celtic were in need of a break as they faltered in their last game of the decade and allowed Steven Gerrard’s Ibrox side their first win at Parkhead since 2010.

It brought down the curtain for the 28-year-old winger in unfortunate circumstances in a season where he has claimed 14 goals from 35 games to underline his consistency as the Hoops go for nine in a row.

However, Forrest, who fell below his high standards in the loss at the tun of the year and was replaced by Olivier Ntcham in 68 minutes, acknowledged no-one can rest on his laurels at Scotland’s title kings. 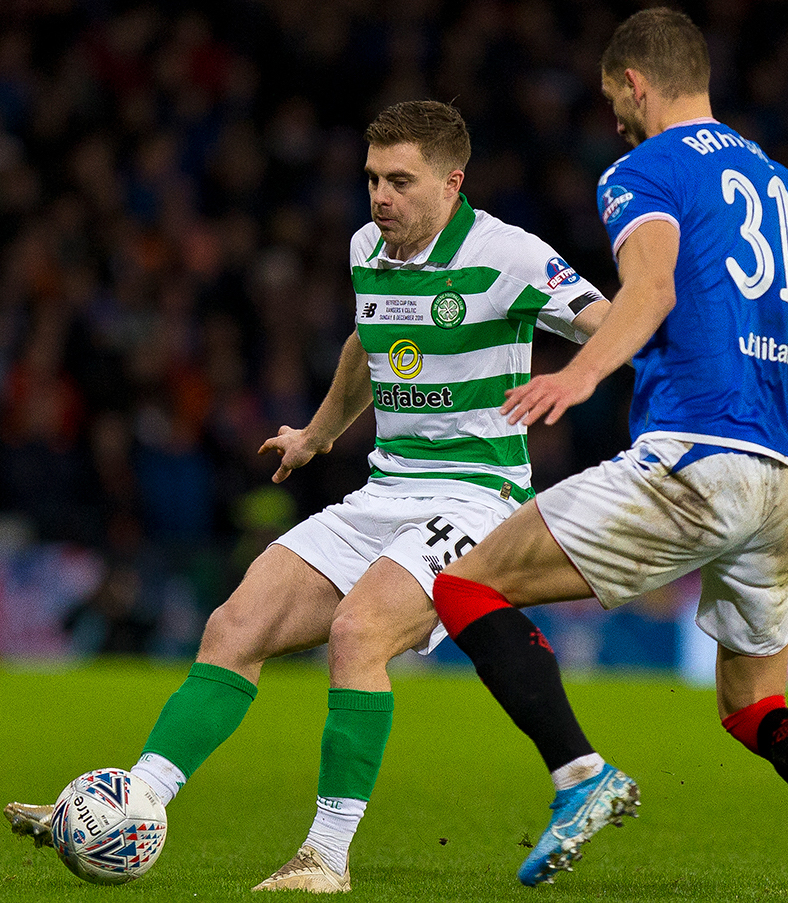 ON THE BALL…James Forrest takes on Borna Barisic on during the Hoops’ 1-0 Hampden success last month.

The Scotland international, speaking to The Herald, said: “It has always been like that since I have come through.

“At Celtic, when you are a forward player, you are judged on every game. When you have a good game, you can never think: ‘That’s me, I’m a good player now’. I have learned that as I have got older.

“You need to keep trying to show it in every game and in training, too. Everyone knows that every good player has bad games when he doesn’t play well. As long as you are working hard. I think this has been the best season that I have had. But I need to keep adding to that right through the season.

Forrest, currently in Dubai with the squad at their warm-weather training HQ, is aware Neil Lennon and his scouts are scouring the transfer market to introduce fresh talent to the Hoops in this window and there is always the fear someone could come in and put pressure on him for a first-team place.

He admitted: “You always think like that. Maybe not before, but definitely in the last couple of years. Football can change so quickly. I have seen players who have been playing week in, week out, drop out. Different things can happen. A couple of bad games for the player, for the team.

“The former manager, Brendan Rodgers, was big on complacency, about not thinking you are always going to play. He was always good with taking boys out for a few games to get their heads right, to let them know that they need to keep performing.

THE WINNER…James Forrest slots in the only goal against Hamilton Accies in September.

“Even though I have been here for so long, every summer and January you always have to push yourself every day because there are young boys coming through and there are also links with us signing players. You always have to raise your standards otherwise you will get left behind, you won’t play or be involved.

“You see players coming in, you see young boys doing well. It is good for competition when we sign players and when young boys come through. You do get a push from that. You are trying that bit harder to prove yourself.”

Forrest is one of four Celtic players – including marathon man Callum McGregor, Kristoffer Ajer and Scott Brown – who are in the top 10 of a list of footballers who have played the most competitive minutes in the first half of the campaign.

Fatigue looked to be a factor during a hectic nine-game programme last month and the forward added: “We had a really good pre-season and we have done really well this season. But I think in the last couple of weeks in December the team was looking like it needed this break.

“We will have a good week training out here and then another week back home before we start playing again. So, I think the break will be good for the squad both physically and mentally.

”With my goals and assists, I feel good and as a team we’re also playing really well, at home and in Europe, too. I feel like we’ve produced some really good performances.

“But it’s only half a season, so I’d never say too much just now. It’s been going really well, but we need to kick on when we get back into it.”