FORMER Celtic star Peter Grant has been sacked as manager of Dunfermline after only five months in charge.

The ex-Hoops fans’ favourite was axed after the rock-bottom Championship club lost 4-2 to Arbroath at Gayfield, their fifth defeat in 12 games.

Fifty-six-year-old Grant, who quit Alloa to replace Stevie Crawford at East End Park in May, has left with the team anchored at the foot of the table, two points adrift of Morton. 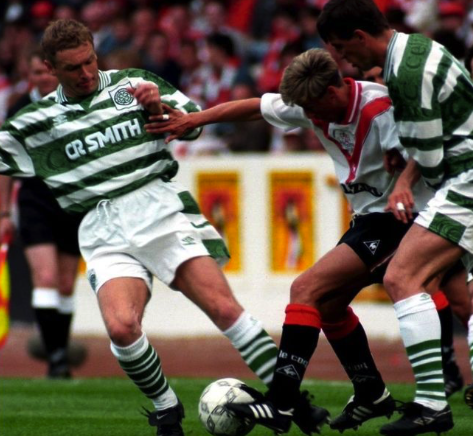 ACTION BHOY…Peter Grant in the thick of it during Celtic’s 1-0 Scottish Cup Final win over Airdrie in 1995.

Pressure has built on the one-time Scotland midfielder, who joined the Parkhead club in 1982 and won two leagues and three Scottish Cups before leaving in 1997, with the Fife side toiling to pick up points after starting the campaign as one of the promotion favourites.

Grant had a brief stint as an assistant to Tony Mowbray at Celtic when they left West Brom to return to the east end of Glasgow at the start of season 2009/10 season.

However, there was no happy homecoming during the Englishman’s disastrous time in the dug-out and the managerial team was axed after a 4-0 loss to St Mirren in Paisley in March 2010 to open the door for Neil Lennon to take over in an interim capacity before the post became permanent in June.

Grant, who also bossed another former club in Norwich City, had a year as Alex McLeish’s No.2 on the Scotland international set-up before both were fired in April 2019.