The Fifers, who are rock-bottom of the second tier without a win after 10 games, announced the appointment earlier today.

Grant was sacked 13 days ago only five months after taking the role at East End Park. He quit Alloa at the completion of the previous campaign.

Fifty-seven-year-old Hughes has been out of work since leaving Ross County in the summer. He has also managed Hibs, Falkirk, Livingston, Inverness Caley Thistle and Hartlepool. 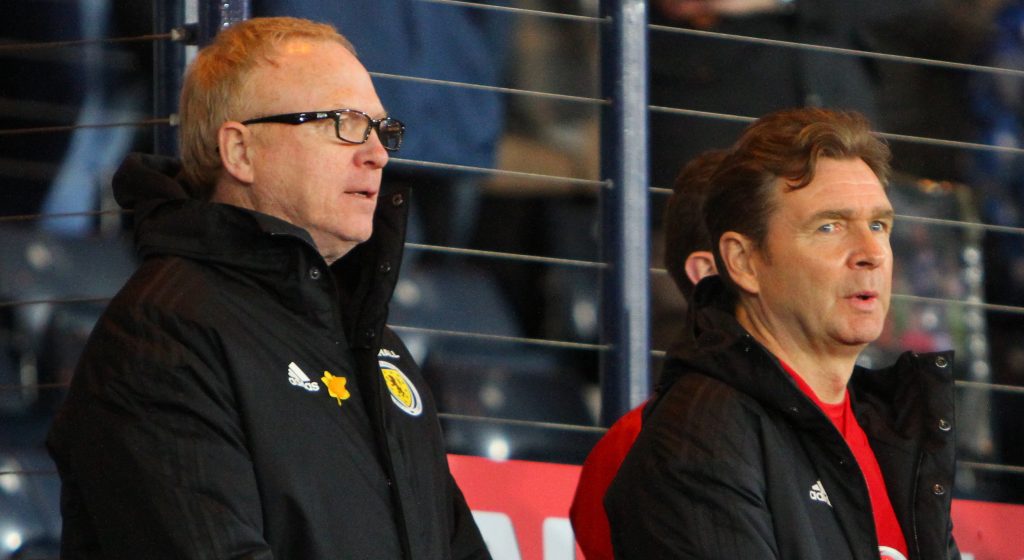 INTERNATIONAL DUTY…Peter Grant with Alex McLeish during his stint as Scotland assistant manager.

A Dunfermline statement read: “John last night signed a contract with our club until the summer of 2023, and will work alongside all of our existing back room staff.

“John recently left his post at Ross County in the summer after successfully keeping the Staggies in the Premiership. He is a highly experienced manager who is highly regarded for developing young players, at the majority of his previous clubs.

“As is normal, a small group of directors, nominated by the board, followed a robust process to select candidates both from those that formally applied, as well as approaching others to ascertain whether they would like to be considered for the position.

“In the end, we identified a small number of candidates who had the right credentials, at this moment in time, to be worthy of interview. Two candidates performed especially well at interview.

“However, it was the unanimous decision of the board that John Hughes, by virtue of his previous experience and leadership qualities was the man we should appoint to help us stabilise our club’s position in the SPFL Championship, and take us further forward.”

Ex-central defender Hughes, who was brought to Parkhead by Tommy Burns from Falkirk, had one season at the club in 1995/96 before moving to Hibs.

He will be in the dug-out for the game one of his former clubs Caley Thistle in the Highland capital tomorrow afternoon.