CRAIG GORDON insists former Celtic team-mate Kieran Tierney has moved up a level since his £25million move to Arsenal in the summer of 2019.

The ex-Hoops stars combined for Scotland in their emphatic 4-0 victory in the World Cup qualifier over the Faroe Islands at Hampden last night.

The keeper, who left Parkhead at the end of his contract to rejoin Hearts, spent five years in Glasgow with Tierney and believes the 23-year-old defender has transformed into a player of genuine world-class qualities.

The versatile left back surged into attack to provide assists for the opening three goals, two by midfielder John McGinn and one for Che Adams as the country celebrated its first triumph in Group F after the draws with Austria, 2-2 at Hampden last week, and Israel, 1-1 in Tel Aviv on Sunday.

Gordon, who took over from fellow former Hoops netminder David Marshall for his 56th cap, said of Tierney’s performance: “I thought he was incredible. He has taken his game on even further. 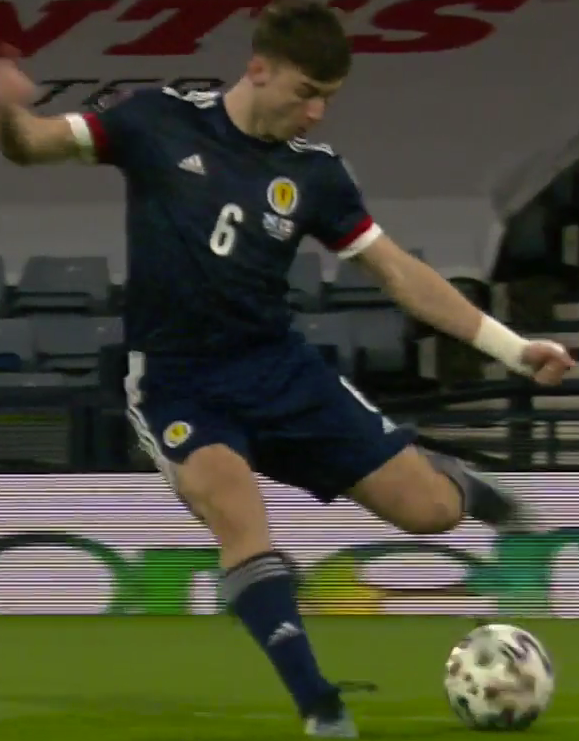 NUMBER ONE COMING UP…Kieran Tierney prepares to set up the opening goal for John McGinn.

“He talks so highly of the Arsenal coaching staff and how they have helped develop him.

“Kieran has been more consistent and tactically and technically he has improved, playing against better players week in, week out.

“He has raised his level because of that. I have seen him come through as a teenager to where he is now and he will only continue to get better.”

Gordon, speaking to the media, added: “For us, over the three games, he has been excellent if not the stand-out in every single one. He has been magnificent and, hopefully, we can keep him fit and playing at this level.

“I think he is world class, I really do.  He is so consistent as well and that is what makes him so good.

“He is doing it in every game and he’s a big for us on and off the park.  He is also in charge of the music and he is great for the camp and a real valued member of the squad.”