FORMER Celtic boss Davie Hay has analysed his old club’s painful 2-1 defeat to Steven Gerrard’s Ibrox outfit last weekend – and has no doubt where the game was won and lost.

The Hoops legend identified the midfield minefield as the key area where the eight-in-a-row champions failed to match their opponents.

It was a home encounter, with all but 800 fans in a sell-out 60,000 crowd backing the pacesetters who knew a win would stretch their lead at the top to eight points heading into the mid-winter break.

However. the opportunity was squandered in a disappointing display with the Govan outfit, with a game in hand, cutting the lead to two points. 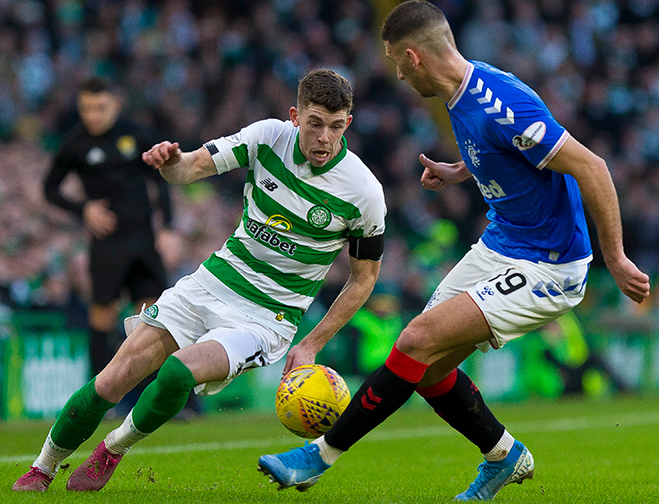 ON THE RUN…Ryan Christie in a challenge with Nikola Katic.

Hay, now a club ambassador, told the Evening Times: “From Celtic’s point of view, they have to find a way to get their midfield back on top in these games. Rangers don’t make it easy for Celtic in that area and there lies the crux of the problem.

“Celtic have to meet that challenge. Rangers have set out their stall to close down the Celtic midfield and stop Scott Brown and Callum McGregor playing and Neil Lennon has to find a way to help them influence the games more once again.

“Those two played well in patches, don’t get me wrong, but I thought that Olivier Ntcham might possibly have played, and Ryan Christie would have started wide. I can see the thinking behind Christie starting centrally, but he was off the boil.

“It’s easy to say that in hindsight, but in Old Firm games it tends to be the winner of the midfield battle that wins the game – and that’s what happened last Sunday.

“You just have to look back to when Celtic won against Rangers in March and earlier this season at Ibrox, Brown dominated the midfield.

“I don’t really buy the theory that the Celtic players were tired. McGregor was probably their liveliest player on the day – and he’s played more than anyone. 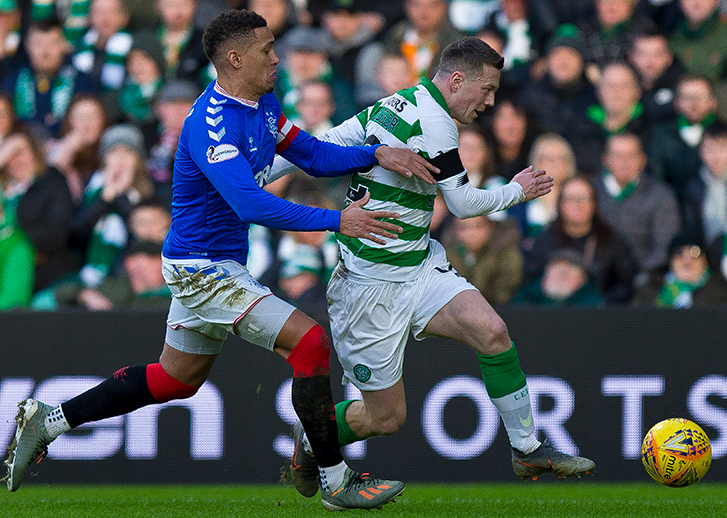 “Where they do need to provide a little help is up front, because not only does Edouard requires a breather, there needs to be an alternative option when things aren’t going so well, too.

“I know the club have been linked with Andraz Sporar, and they certainly do need someone reliable to come in as Leigh Griffiths still seems to be a little bit off full sharpness.

“Overall, there’s no getting away from the fact that Celtic have been second-best in most departments over the last two Rangers fixtures.”

Hay added: “What happens in football as a manager is that when you get a result, you’re tactically astute and when you don’t, you’ve suddenly been out-thought. I don’t mean that to sound flippant, but the fact is that Celtic are 10 points better off at this point than they were last season.

“That shows that Lennon is doing something right, as well as being an indication of how well Rangers have done to keep pace with Celtic.

“He will, of course, be contemplating his approach against Rangers, but I have always believed Neil Lennon to be under-rated in terms of his tactical knowledge and I have no doubt he will have a plan to counter Rangers better in the next two games.

“He will have to, because I think whoever comes out on top of those will be very likely to win the league.”

Celtic will now have their week’s break in Dubai before the players return with their first match scheduled for a Scottish Cup-tie against Partick Thistle at Firhill in a fortnight’s time.