Celtic Quick News on News Now
You are at:Home»Latest News»EX-HOOPS TARGET TO WALK FOR FREE
By CQN Magazine on 3rd January 2020 Latest News

FORMER Celtic target Trevor Carson, who saw a £750,000 move to the Hoops fall through two years ago, is ready to quit Motherwell for free at the end of the season.

The Northern Ireland international keeper is out of contract and is poised to move on.

Livingston are looking to land the experienced 32-year-old shotstopper on a pre-contract deal.

But it could have been so different for Carson during the January 2018 window when Brendan Rodgers made his move for the player who had impressed him in his performances against the Parkhead outfit.

The ex-Celtic boss needed cover in the No.1 position following a knee injury to Craig Gordon that would see the Scotland international sidelined for weeks.

With only veteran Dorus De Vries as back-up, Rodgers made a bid of £350,000 for Carson, but was amazed when Well demanded £750,000 for the keeper who had cost them something in the region of £20,000 from Hartlepool the previous summer. 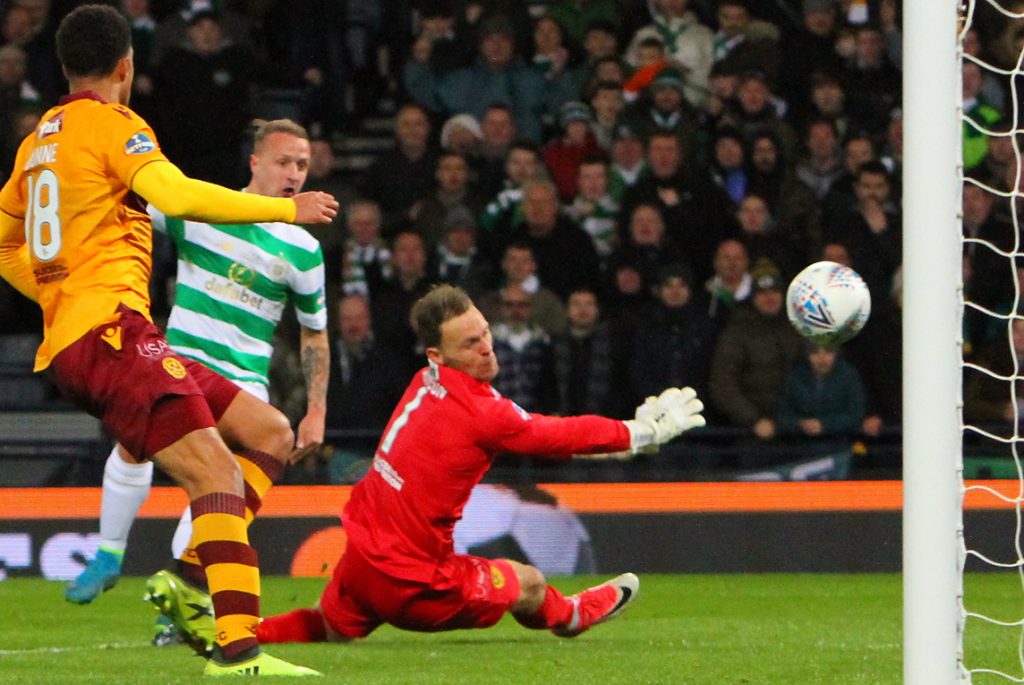 TOUCH WOOD…Trevor Carson is beaten by a Leigh Griffiths shot, but the ball struck in the post in the Hoops’ 2-0 League Cup Final win in November 2017.

The champions’ gaffer refused to meet the valuation and, within days, had brought in Scott Bain on a loan deal from Dundee until the end of the campaign which, of course, became a permanent move in the summer.

A couple of months after the move had collapsed, Carson, speaking to the Daily Record, admitted: “To have a club like Celtic after you, obviously you walk around a foot taller. It was a whirlwind couple of days and I was thinking will it happen, will it not?

“When someone like Brendan Rodgers is interested in you, you’ve got to be flattered about it. I’ve thought I must be doing something right if clubs like that are looking at you. It was great to be linked with a club like Celtic.

“We had a game on the Wednesday night, the night the window shut. You’re human. I was trying to focus on the game, but there’s still part of you checking Google and Twitter to see what people are saying.

“It was a massive disappointment that it didn’t happen at the time because you think it might be a once-in-a-lifetime opportunity. I might never get the chance again to play for a club like Celtic. Who knows?”

Carson is about to get his answer.