BILLY McNEILL’S selfless sportsmanship left Richard Gough overwhelmed when the Celtic legend was one of the first to congratulate him on captaining the Ibrox side to nine successive titles.

The former Hoops skipper was first to the notable achievement in the glory days of Jock Stein’s era when they clinched their first championship in 12 years when they won the crown in 1966.

The champion successfully defended the glittering prize over the next eight years during a period of unparalleled success for the Parkhead men.

When Gough learned of McNeill’s passing at the age of 79 on Monday night, he recalled the special moment that emphasised the qualities of the Celtic icon.

The former Scotland international central defender, speaking to the Daily Record, said: “At the moment, only Billy and I have captained Old Firm teams to nine in a row. 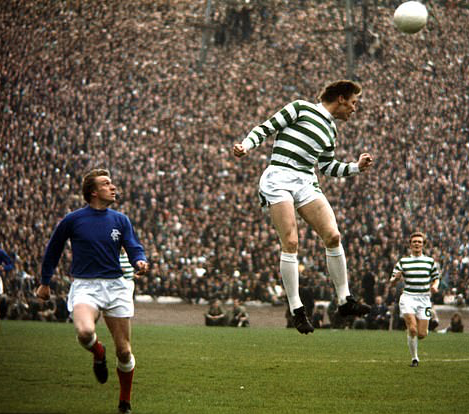 “We both knew the pressures of that and I will never forget his reaction when Rangers did it in 1997.

“One of the first calls I got the next day was from Billy. He just said to me: ‘Richard, congratulations to you and Rangers. I didn’t think it would ever be achieved again’.

“That always stayed with me. It summed up Billy’s class. He showed true respect to Rangers.

“As an Old Firm captain, I always looked at John Greig and Billy as an example of how to conduct myself.

“Billy was a top player and a fair player. He was a true man. I took a lot from him.

”As a top centre-back, Billy was always someone I looked to growing up.

“I remember going away on my early Scotland trips and I’d always try to learn off the senior boys. 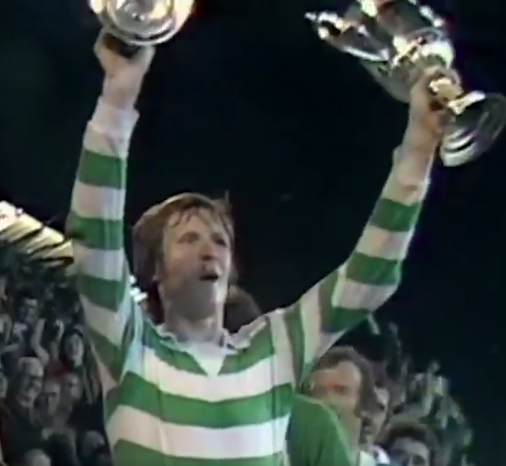 GLORY BHOY…skipper supreme Billy McNeill with the Scottish Cup in 1975.

“I would listen to stories from guys like Graeme Souness, Kenny Dalglish and soak it all up. Roy Aitken and Tommy Burns were also in the squad at that time and I used to ask them about Billy.

“Roy told me a great story about when Billy was manager of Celtic for the first time in early 1980s.

“They were going through a spell of losing goals from corners. Big Packie Bonner and the defenders were all having a debate about how to solve it.

“But Roy said Billy came out on the training pitch, gave Davie Provan a bunch of balls and told him to put corners in.

“Billy said to them: ‘Put the crosses in and I’ll defend it myself’.

“Billy planted himself between the six-yard box and the penalty spot and cleared every single cross. He just went and attacked the ball in the air and nobody could get near him.

“As a young defender, that was a great story for me because that’s what I wanted to do.

“To hell with marking anyone, I was just going to win the ball and clear it. Billy was right, the best thing to do as a defender is just go and head it.

“He was remarkable in the air and that little anecdote always stayed with me. All the Celtic players were arguing about how to defend corners and Billy – as the leader – showed how it was done.

“Roy said it was hilarious watching Billy clear all the corners as all the other Celtic players tried to score.”

Gough didn’t mention it, but he proved to be equally sportsmanlike when Wim Jansen’s Celtic stopped the Ibrox side’s bid for 10-in-a-row. The Dutchman, in his only season at the club, led them to a 74-point finish while the Govan outfit had to settle for 72. 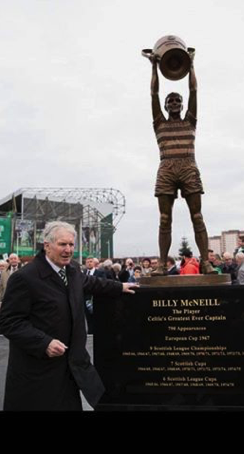 THE CELTIC WAY…Billy McNeill with the statue erected in his honour.

On the day of May 9 goals from Henrik Larsson and Harald Brattbakk were enough to give the Hoops a 2-0 victory over St Johnstone in the last day of the league campaign, Gough and his team-mates were at Tannadice to play Dundee United.

A slip at Parkhead would have opened the door to them as they overcame the Tayside outfit 2-1, but, thankfully, there were no banan skins in the east end of Glasgow that glorious afternoon.

The game at Tannadice was running minutes late following full-time at Parkhead, when live cameras caught Gough coming off the pitch moments after the final whistle.

Before the interviewer could ask a question of the defender, he had one of his own: “What was the Celtic score?”

He was informed they had won 2-0. Without a moment’s hesitation, Gough, possibly remembering a call from Billy McNeill the previous year, said: “I would like to congratulate Celtic on their success.”

The Ibrox skipper obviously picked up more hints from the Celtic great than just how to play the game of football.