Celtic Quick News on News Now
You are at:Home»Latest News»EX-SKIPPER WARNS OF LENNY FURY
By CQN Magazine on 9th May 2019 Latest News

FORMER Celtic star Charlie Mulgrew insists Neil Lennon will demand his players go flat out for victory at Ibrox or Sunday – or face the consequences.

The versatile defender or midfielder, now with Blackburn Rovers, recalled the afternoon over nine years ago when the Hoops blew the chance to win the title in Govan.

And the Scotland international revealed the Irishman, in his first stint as Parkhead manager, was in a fury afterwards.

It was a stormy encounter with the champions-elect losing 3-2 while having Cha Du-Ri and Victor Wanyama red-carded and the unhappy boss sent to the stand.

Mulgrew, speaking to the Daily Record, said: “Being banished didn’t bother him in the slightest – Lenny was more annoyed at how Celtic played and the fact that we blew a golden opportunity to win the league at Ibrox.

“He probably had me by the throat at one stage!

“Lenny will have Celtic fired up and he’ll love it. He’ll want to get one upon Rangers as it might be the last chance he gets to manage a Celtic team at Ibrox.” 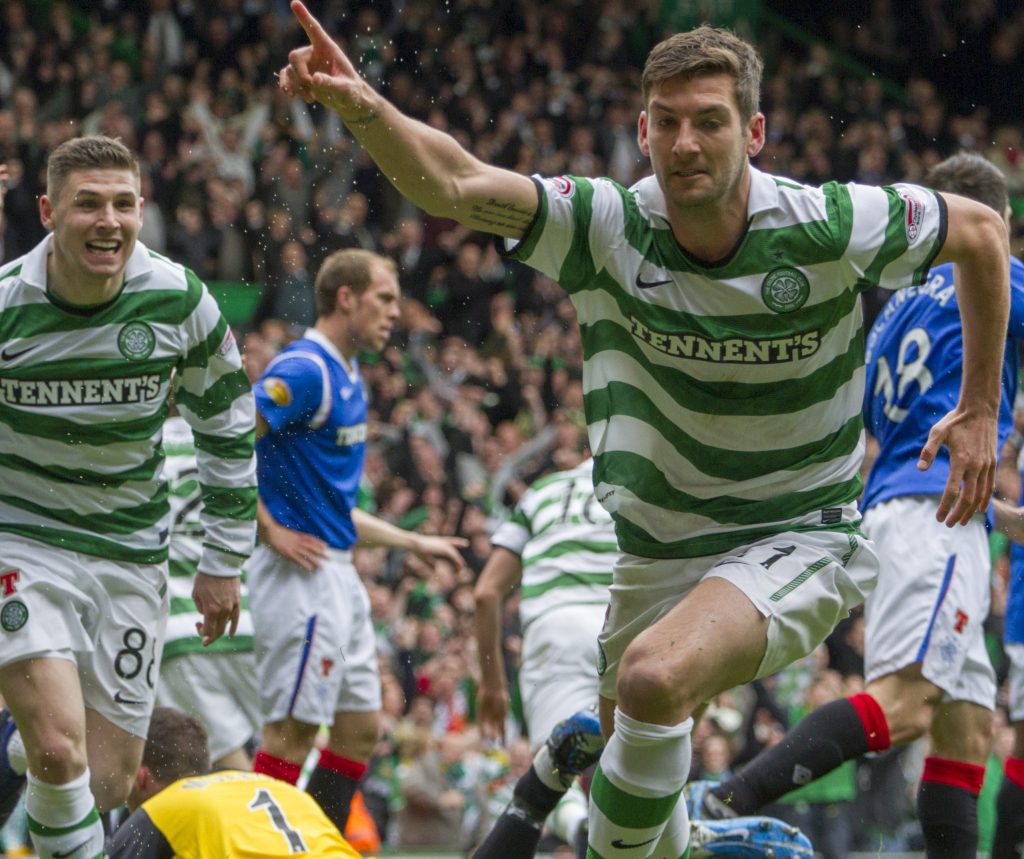 HAPPY DAZE…Charlie Mulgrew turns away after scoring a header against the Ibrox side with Gary Hooper about to join the celebrations.

On this occasion, of course, interim manager Lennon and his players already have the club’s eighth successive title in the bag after the 3-0 victory over Aberdeen at Pittodrie last weekend.

Stand-in skipper Mulgrew looked back to the confrontation on March 12, 2012 and added: “People said it mattered more to Rangers as they didn’t want to see Celtic celebrating a title win on their patch.

“But it doesn’t matter if it’s the first meeting or last as players are just desperate to win.

“These are the games that matter most to players and fans. It doesn’t matter if the league is wrapped up, derby matches are just special to play in.

“The Rangers team and their fans will want to win this game especially and give themselves a lift going into next season.”

This will be the fourth encounter between the Hoops and Steven Gerrard’s outfit this season with the title kings winning both confrontations in the east end of Glasgow – Olivier Ntcham scoring the only goal in September and Odsonne Edouard and James Forrest netting in the 2-1 triumph in March.

A deflected goal from skipper Scott Brown gave the Govan men their first win over their Glasgow neighbours in 13 outings in December.