The on-loan Portuguese winger, who agreed a season-long temporary transfer switch from Benfica in August, and the Japanese international striker, who arrived in a £4.6million four-year deal from J-League outfit Vessel Kobe, hit doubles against the Tayside outfit.

O’Neill liked what he saw from Ange Postecoglou’s summer signings – but insisted they have a lot of work ahead if they hope to be mentioned in the same breath as Henrik Larsson.

The Irishman, who won a domestic treble in his first season 2000/01, said: “I thought Celtic played splendidly, in particular Jota and Kyogo Furuhashi.

RISE AND SHINE…Filipe Jota leaps high in celebration after his second goal against Dundee at Dens Park.

“Now, it looks as though both players could be blown over by a strong puff of wind, but they are extremely talented.

“That said, there is a long, long way to go before they’ll be up with the Henrik Larssons of this world. But they are both exciting footballers.

“The supporters seem to really enjoy them, it’s great for fans to have heroes and know they are going to be entertained.

“There is no doubt both players have been excellent recruits.”

Jota and Kyogo go back into action as they set foot on Hampden for the first time when the Hoops take on holders St Johnstone in the Premier Sports League Cup semi-final on Saturday.

A victory over the Perth club will, of course, keep Postecoglou on course for his first piece of silverware since taking charge of the team in June. 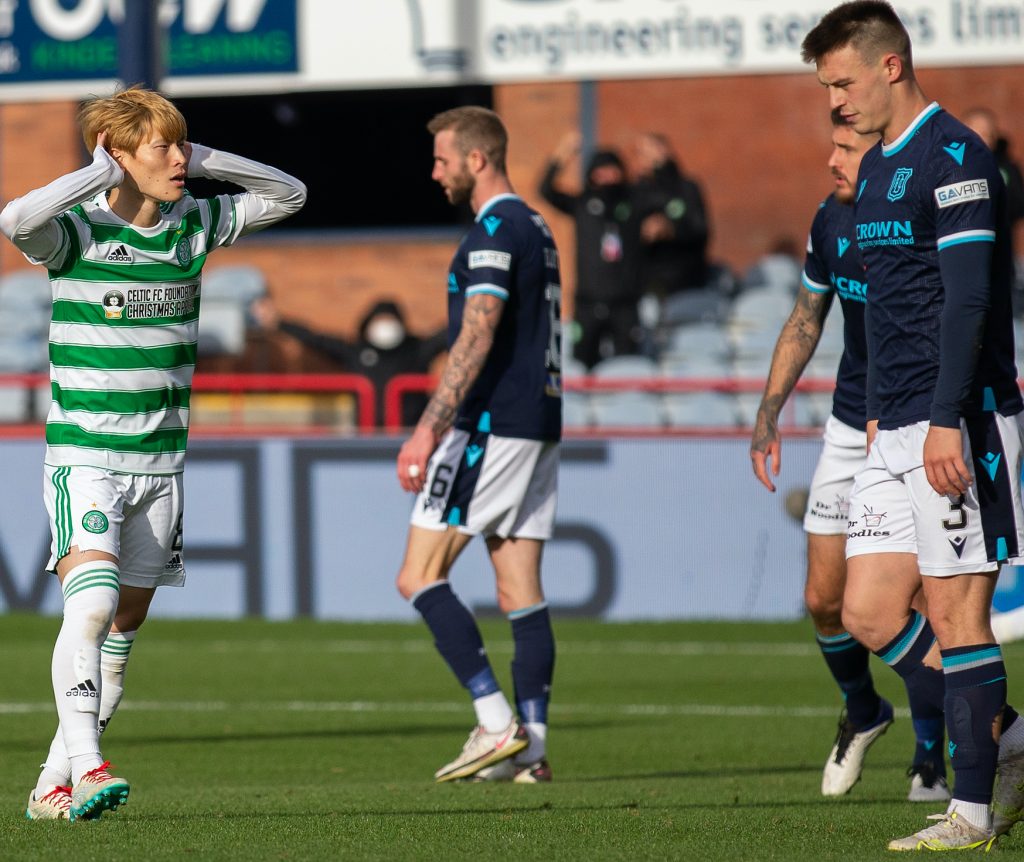 LET’S EAR IT FOR THE BHOY…Kyogo Furuhashi celebrates his second goal against the Dens men.

O’Neill has scrutinised the Greek-Australian’s results during a massive rebuild at Parkhead with a dozen new players arriving and the likes of Odsonne Edouard, Kristoffer Ajer, Ryan Christie and Olivier Ntcham heading out along with much-decorated captain Scott Brown who accepted a player-coaching role at Aberdeen.

The 69-year-old fans’ favourite continued: “At this stage, I think things are going as well as can be expected.

“It looks to me as though the supporters have really taken to Ange and they are willing to give him every backing necessary.

“He had a shaky start, but he is now through that and things are on the up. The style of football is good and the players are responsive to his methods. 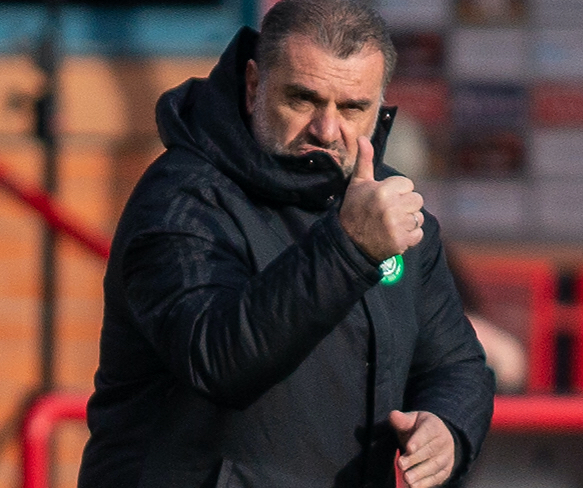 THUMB’S UP…Ange Postecoglou looks happy with what he is watching.

“So, to be where they are now – when you consider he didn’t know his backroom staff and had to bring in a number of first-team players – he can be satisfied.”

However, O’Neill, speaking to the Sunday Post, added: “Of course, this is just the start. As manager of Celtic, it’s all about what you do in the next game. And then the game after that. It’s relentless.

“You just need to try to win as many games of football as possible.

“When I took over as Celtic manager, I was up against an excellent Rangers team. They had won the title from us the previous season by 21 points. Last season, the gap was 25 points.

GLASGOW BELONGS TO ME…Martin O’Neill is high and mighty as he watches Celtic’s 6-2 derby triumph in August 2000.

“So, back in 2000, my view was that we had to hit the ground running. To do that we needed a few new players and we needed to get more out of the ones we already had.

“We brought in Chris Sutton, Neil Lennon, Alan Thompson and Didier Agathe. We also got plenty out of the likes of Stiliyan Petrov, Johan Mjallby, Jackie McNamara and Lubo Moravcik.

“In our first game against Rangers, we managed to beat them 6-2. That gave us so much confidence.

“On reflection, I can’t underestimate how important that victory was for everyone at the football club.

“When we next met them, and lost 5-1 at Ibrox in the November, it didn’t dent us too much. We were hurting, but we still had our confidence.

“We felt we could go on and win the Premier League.

“It’s all about recovering from setbacks and not dwelling on them.

“Ange appears to be able to do that. And that’s a good thing.”