Celtic Quick News on News Now
You are at:Home»Football Matters»EXCLUSIVE! BERTIE AULD: ‘INTIMIDATE A WEE BOY FROM MARYHILL? WHAT A WASTE OF TIME!’
By CQN Magazine on 10th March 2018 Football Matters

“It’s a real test of a player’s nerve,” says the Celtic legend. “I loved the hostility. I thrived on it – and so, too, did my team-mates.” 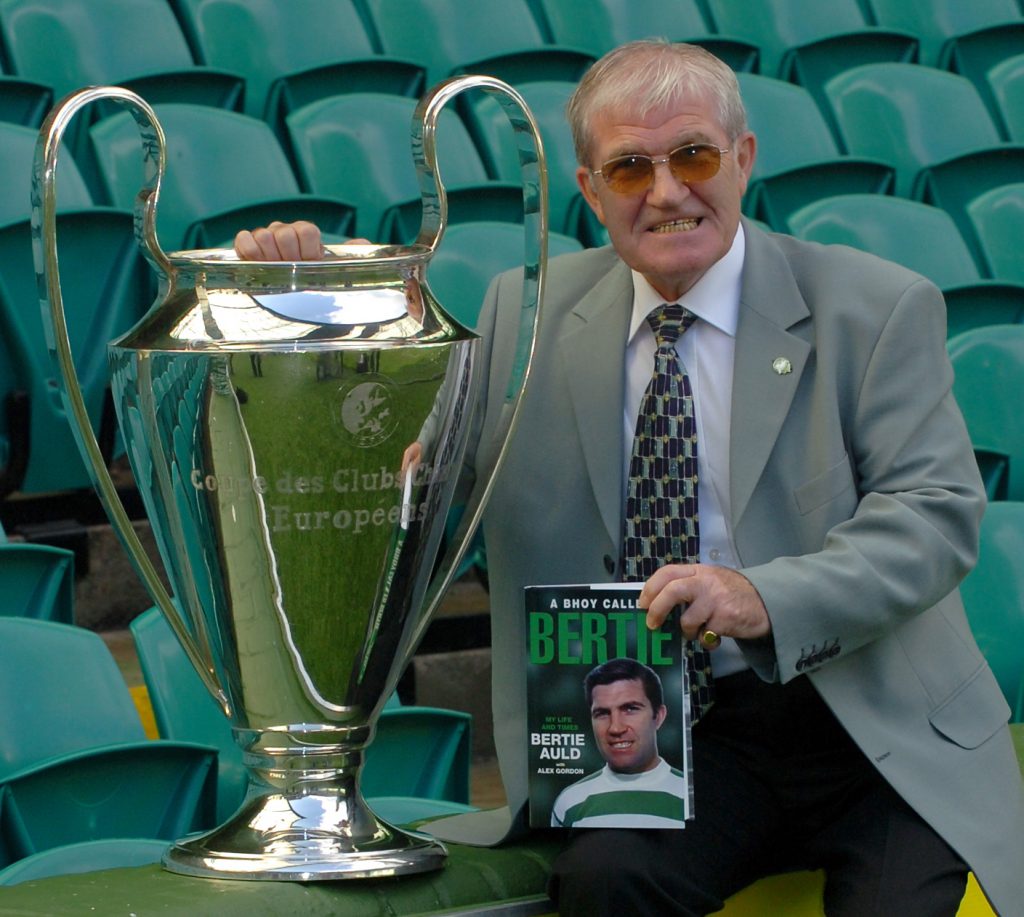 “READ ALL ABOUT IT…here I am with the European Cup and my autobiography, ‘A Bhoy Called Bertie’, in Paradise.”

BRENDAN RODGERS, as you would expect, is in no rush to reveal his line-up for the game against Rangers at Ibrox tomorrow.

Why should he let Graeme Murty know his formation a day ahead of kick-off? There’s talk of Dedryck Boyata and Stuart Armstrong being available for selection following their recent injuries.

That has got to be good news for the Celtic manager. I thought both had been playing very well until the Belgian sustained his groin injury against Kilmarnock last month and the Scot had to undergo a hernia operation in January.

Boyata looked to be Brendan’s main central defender until he limped off early in proceedings on that wretched Rugby Park playing surface. Marvin Compper, the £1million recruit from RB Leipzig in January, made his debut against Morton last week and he might need a couple of games before he settles in at Parkhead.

He looked a little nervy at the start, but picked up the rhythm as the game progressed. But you have to wonder if he is completely match-fit and ready for a game at Ibrox that is sure to ignite right from the off.

Boyata, on the other hand, knows what the atmosphere is like in these games and it won’t have done him any harm that he claimed a rare goal in the 5-1 victory at their place in April.

And he partnered Jozo Simunovic in the 2-0 victory in Govan in September and practically strolled through the encounter.

If Brendan really believes he is 100 per cent fit and up for the obvious rigours of this fixture, then I think he will play him.

And I have to admit I really like the look of Armstrong. He is a big, physical presence in the middle of the park and covers a lot of ground during a game. He brings a lot of authority and energy to the engine room in the team.

He has missed the last 11 games, though, and that might count against him starting in this one. However, he could play a role coming off the substitutes’ bench, depending, of course, on how the match is developing.

One player I would really like to see in from the kick-off is Callum McGregor. The hostile atmosphere at Ibrox can get to a lot of players, but it doesn’t seem to knock him out of his stride.

Listen, I loved playing Rangers on their own ground. You knew the fans hated you, they would scream at you from start to finish. You would go over to the touchline to pick up the ball for a throw-in and be greeted with an avalanche of bile.

The best thing to do was smile and nod at them. They would go ballistic! There’s no way someone calling me all sorts of names was going to upset me. If anything, it was oxygen. They were wasting their time. Intimidate a wee boy from Maryhill? No chance! 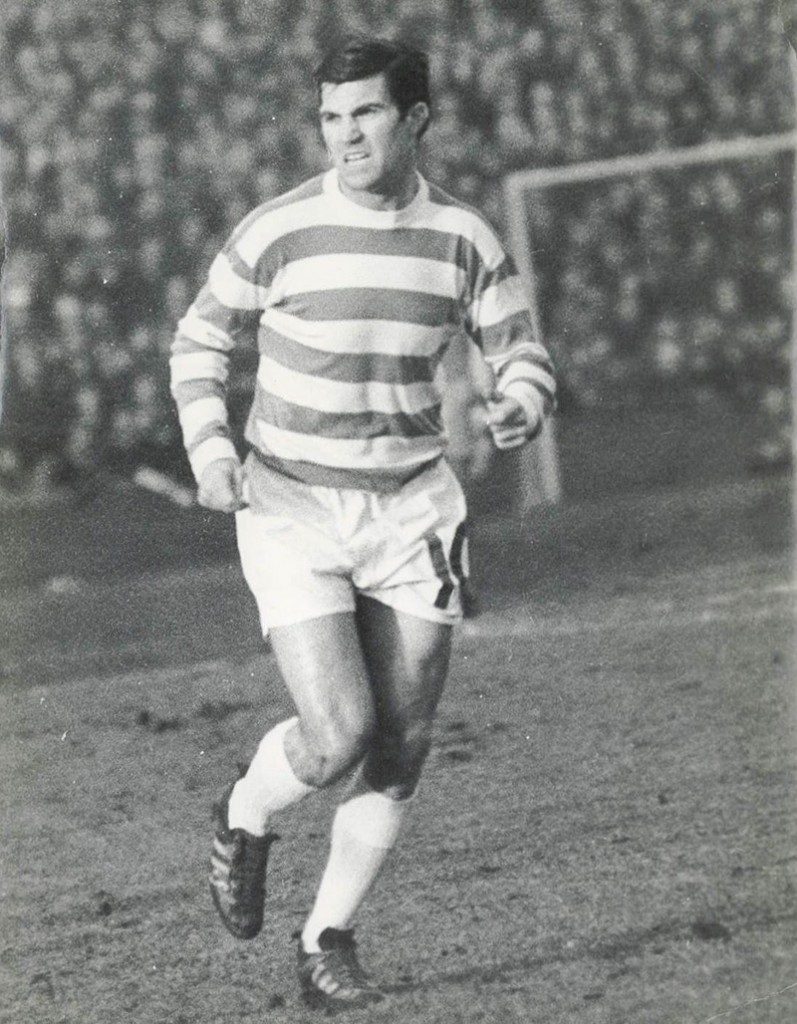 ‘STRUTTING MY STUFF…and I absolutely thrived on the hostile atmosphere at Ibrox .”

I looked around Jock Stein’s team in the dressing room and I saw characters such as Tommy Gemmell, Bobby Murdoch, Davie Hay, Billy McNeill, Jimmy Johnstone, Willie Wallace, Bobby Lennox and John Hughes, among others, and we couldn’t wait to get out there and ram their insults down their throats.

John Clark, the Quiet Man at Parkhead, was immense in these games, too, as he played alongside Big Billy. He rarely got the credit he deserved, but what an individual to have in your team. I would place him alongside England’s World Cup-winning captain Bobby Moore for the immaculate way he read play and anticipated every move from the opposition. No back door was ever left open with Clark around.

I look at Callum and I can see a laddie who has grown up supporting Celtic. Like Wee Jinky, he was a ball-boy at Parkhead, so his pedigree and loyalty cannot be questioned. He is ready for the call to arms, I’m sure of that.

He has a lovely first touch and, as a former midfield player, I can appreciate how important that is. He’s always available for passes and makes clever runs that will stretch the opposition. He can pick a pass, too, and, like Boyata, he knows what it is like to score a goal at Ibrox.

I just hope he can get some protection in this game. It’s going to be a rugged, tough, snarling encounter where there will be lots of no-holds-barred challenges. That’s part of this particular game.

But it’s fairly obvious Callum is not a physical player. Crunching into tackles is not his forte, but he has been gifted with many other skills, vision, speed of thought and quick feet. 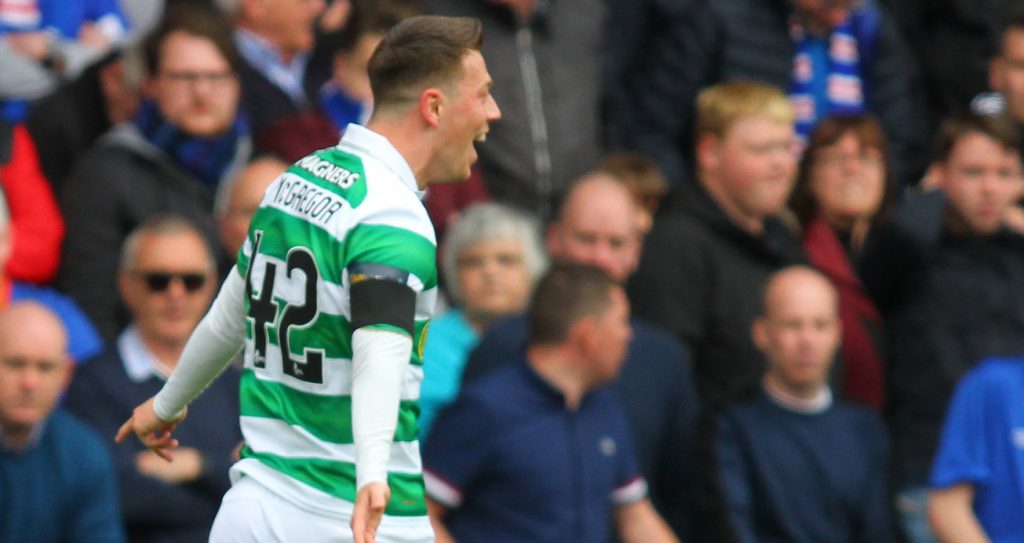 “SILENCE IS GOLDEN…Callum McGregor celebrates a strike at Ibrox, but the audience is struck dumb.”

Give him time and space on the ball and he’ll destroy Rangers. He has not been blessed with the greatest of pace, so that’s where Scott Brown and Olivier Ntcham have to play important roles.

They’ve got their own jobs to take care of, but they will have to offer protection to their colleague in this one.

Broony has been amazing over the past couple of years. He has had to change his game from box-to-box player to a holding midfielder and I think he has made the transition with remarkable ease. At 32, he is bringing all his experience into play.

What a fantastic player to have in your team. He’s got a wee cocky strut about him and I welcome that in a player because the opposition – the players as well as the fans – just can’t stand it.

Ntcham is getting better as the season wears on. Again, he is a powerful presence and I wasn’t surprised when I read his second preferred sport is boxing. He looks in the sort of shape to step into a ring right now and fight for a title!

And we cannot overlook the contribution we will get from Wee Jamesy. He’s scored 16 goals this season and that’s a phenomenal tally for a winger. James Forrest, I’m informed, has never scored against the Ibrox side. That situation could change in this fixture.

Big Jock used to gather his players around him just minutes before we left the dressing room for these games. He would say: “Win that first 50/50 challenge. Let them know you mean business. Remember, I am watching you!”

Brendan Rodgers might even relay the same message to his team at Ibrox tomorrow afternoon.

TOMORROW: I’ll reveal all about my unforgettable memories of duels with Rangers. Don’t miss them – another exclusive on CQN, the unbeatable site for Celtic supporters.