TOMMY BURNS was witnessing Celtic’s title bid disintegrating during the defining month of March during the turbulent 1996/97 crusade.

The fans’ favourite had returned to the club on July 12 1994 and had won the Scottish Cup in his debut campaign. That was followed by a barren term and all eyes were on the boss during a third challenging season.
In another CQN EXCLUSIVE series, we chart Tommy Burns’ career as the team’s gaffer during testing times on and off the field. Here is the twenty-third instalment from Alex Gordon’s tribute book, The Winds of Change, which was published by CQN in 2015.

THE pressure on the Celtic manager was incessant and, 24 hours after toppling 1-0 at home to Rangers on Sunday March 16 1997, Tommy Burns was again making headlines as he reacted to a fresh storm of criticism, especially the actions of Paolo di Canio towards Iain Ferguson near the end of the game and after the full-time whistle.

Burns insisted his player had been goaded into reacting by “troublemakers” in Walter Smith’s side.

He said: “There are people who are involved in Old Firm games who know the damage that can be done around the country by not behaving properly. Those who are new to it will get caught up – not that I’m condoning them – but they don’t understand what is going on.

“Ultimately, I would defend Paolo’s actions. He is a very passionate man about his football, who let himself be wound up by certain people who should know better.

“I have spoken to him and that’s enough. I have found out the reasons why he got involved and after what he told me he was perfectly entitled to get involved.” 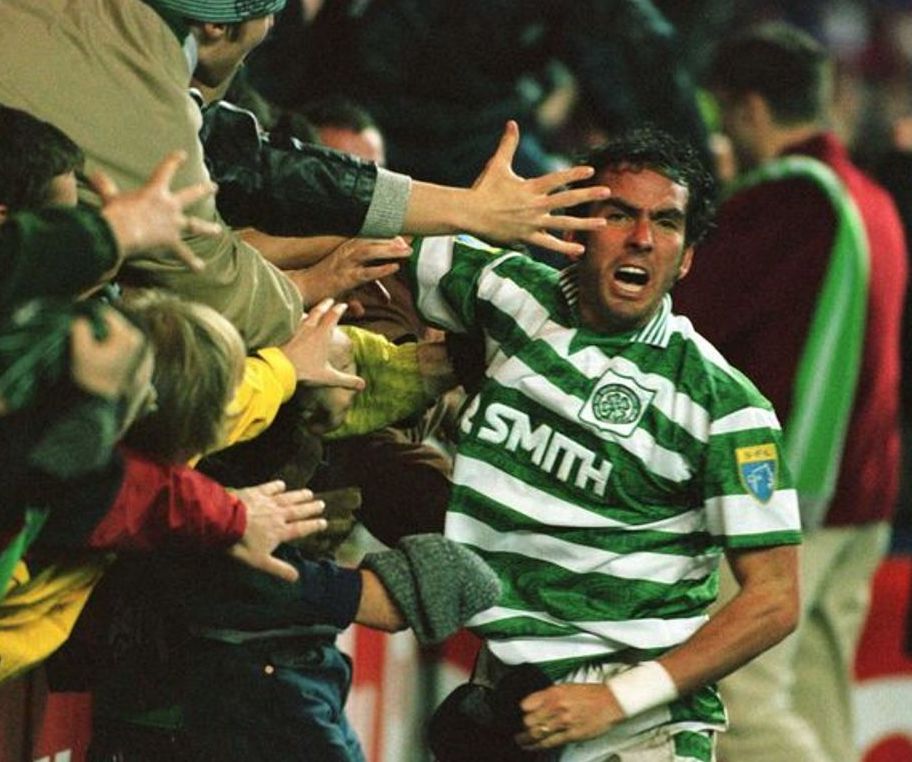 FANS’ FAVOURITE…the temperamental Paolo di Canio celebrates with the Celtic support after scoring against Rangers at Ibrox in January.

Di Canio claimed Ferguson, in the foulest of language, had questioned his parentage and, foolishly, he had reacted. Burns then revealed Ferguson had phoned him to insist he had not sworn at Di Canio.

The Celtic boss added: “I appreciate the fact that he has contacted me to put his side of things. At least, that shows there is a willingness to try and calm the situation.

“There are times we need to remember it’s only a game. For some wee boy who’s had his head split open, for any woman that’s been attacked or any man who’s been stabbed… it’s not worth it. We’ve had fans killed leaving this ground and people’s sense of reality has been lost when that happens. There’s too much hype.”

There may have been hype, but there was precious little hope for Celtic in the league run-in. They had just surrendered six points in back-to-back defeats against Kilmarnock and Rangers and they would throw away another two when they visited East End Park and shared four goals with Dunfermline on March 22. 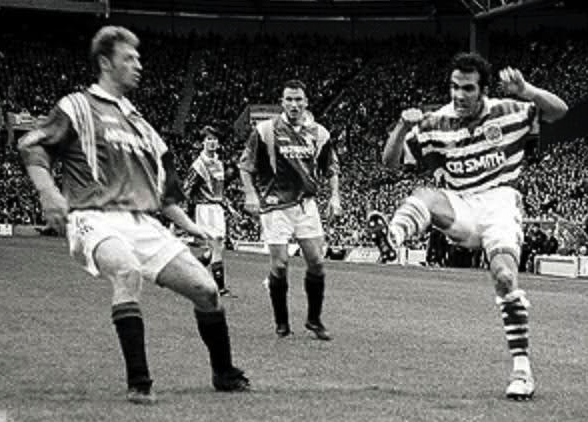 The flaws of the team on the field were more obvious than the inner turmoil that threatened to tear the club apart. Paolo di Canio was making noises about preferring to play elsewhere while Jorge Cadete’s wife and child had returned to Portugal and the player was known to be unhappy about earning less than half as much as Andreas Thom.

He would later claim: “I was treated like a dog.” As a gesture, he threw his shirt into the crowd after the stalemate in Fife.

And, in the midst of the carnage and chaos enveloping the dressing room, the offer of a new contract for Tommy Burns had been put on hold by Fergus McCann. The craziest and most implausible of soap operas seemed to being played out at Parkhead.

Celtic, in fact, were fortunate to escape East End Park with a point after trailing by two goals inside half-an-hour. Gerry Britton claimed the opener in the 16th minute and Harry Curran added a second. Burns watched his team toil until Phil O’Donnell pulled one back just after the hour mark and Simon Donnelly rattled in the equaliser in the 72nd minute. 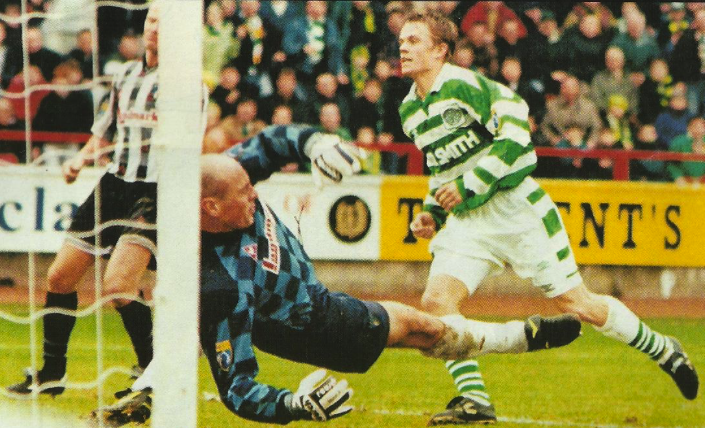 MAKING A POINT…Simon Donnelly slams a close-range effort past Dunfermline keeper Ian Westwater to make it 2-2 at East End Park.

On the same afternoon, Rangers crashed 2-1 to Kilmarnock at Ibrox in this bizarre league campaign. The Ibrox side were now on 71 points with the Hoops seven adrift. Burns declared: “This result keeps us hanging in there and we’ll keep going. A hell of a lot can happen in five games.”

One newspaperman thought the words had a distinctly hollow ring to them. On the possibility of Celtic claiming the title, the unimpressed scribe wrote: “The odds on that happening are on a par with the Loch Ness Monster making a personal appearance to present the championship to Paul McStay.”

Celtic, by now, were more insipid than inspired and that was underlined in the next game, a spiritless 1-1 draw with Raith Rovers at Stark’s Park. It was goalless until the 89th minute when Di Canio snatched the breakthrough goal. The team, lamentably, couldn’t hold the lead for 60 seconds and David Craig equalised in the fading moments.

Alas, the result was in keeping with Celtic’s patchy, nervy performance, beginning to look more like a team going through the motions in the league with an eye on their only hope for a trophy, the Scottish Cup. The draw meant they had dropped 10 points in four games since beating Rangers in the national competition. 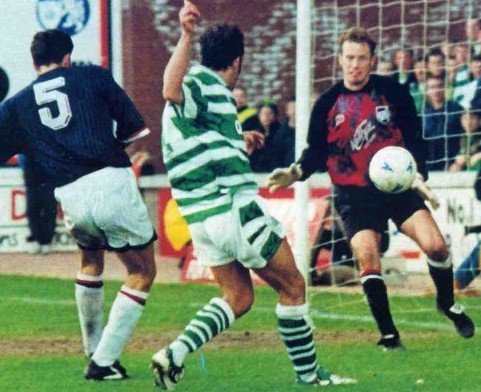 The Ibrox men comfortably strolled to a 4-0 triumph over Dunfermline in Glasgow on the same day. Tommy Johnson, signed by Burns from Aston Villa for £2.3million to bolster his attacking options during the run-in, made his debut against the Fifers in the second-half as a substitute for Simon Donnelly. His initial enthusiasm was stifled by the general apathy of the afternoon.

Paul McStay deserved a greater farewell to football than a nondescript 10-minute outing in Kirkcaldy with only a paltry 7,914 fans in the ground to witness the sad departure of a true Celtic legend. However, the ankle injury that had plagued him throughout the season finally persuaded the skipper to call it a day, although no-one knew it at the time.

As he hobbled off, the club was swept closer to the rocks of desolation.

Burns’ attitude at the end of the game was somewhat surprising, verging on the mystifying. He admitted: “I don’t think we deserved to win the game.” Asked about the evident lack of desire and spirit within the side, he replied: “It’s up to you to decide.”

The answer was delivered with a sigh and a shrug of the shoulders, a demeanour that appeared to reflect the ills that were being inflicted upon the very heart and soul of the club. 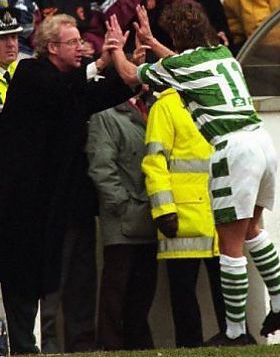 HAPPIER TIMES…Tommy Burns and Jorge Cadete celebrate a goal from the Portuguese marksman.

He warmed to the prospects of the Scottish Cup semi-final which was due at Rangers’ stadium with Hampden under reconstruction. With a hint of candour, he said: “I think people are wondering about the possibility of a shock at Ibrox and will be sitting back and hoping to get it.

“Since we lost to Rangers in the league, there has been nothing much for anyone at the club to smile about and this Saturday the onus is on us to make the supporters smile again. We must beat Falkirk, keep our season alive and put ourselves in a position to lift silverware.

“The importance of a Cup win should not be underestimated. Claiming the Scottish Cup would mean that the season was successful.

“We still have a ghost of a chance of winning the title with four games left to play and, as long as that is the case, we will concede nothing.”

* TOMORROW: Don’t miss the EXCLUSIVE twenty-fourth dramatic instalment in The Tommy Burns Story – only in your champion CQN.