THE third year of Tommy Burns’ managerial career at Celtic was not going according to plan.

In another CQN EXCLUSIVE series, we chart Tommy Burns’ career as the team’s gaffer during turbulent times on and off the field. Here is the fourteenth instalment from Alex Gordon’s tribute book, The Winds of Change, which was published by CQN in 2015.

INSIDE nine months of the eagerly-awaited 1996/97 campaign, Tommy Burns’ reign as Celtic boss was over. He was relieved of his managerial duties by Fergus McCann with three league games still to play; assistant Billy Stark reluctantly stepping in.

Burns was offered a post in charge of youth development, but his self-esteem would never have allowed him to accept the position. Technically, on May 2 1997, he resigned. To all intents and purposes, though, he had been sacked.

His vision of an exciting, attractive Celtic had been buried under the rubble of a disastrous crusade that saw Rangers achieve their target of nine consecutive championships.

Even worse was the curiously tentative resistance of Celtic to block their great rivals’ bid. Burns watched in anguish as his team lost all four of the Old Firm league games, the first such occurrence in the 22 years of the Premier League. The club went out of the League Cup, beaten 1-0 in extra-time by Hearts at Tynecastle in September. First Division Falkirk triumphed 1-0 in the Scottish Cup semi-final replay at Ibrox on April 23, Burns’ last game in charge.

END OF A DREAM…Tommy Burns’ hopes and aspirations for Celtic took a severe downturn in his third year.

The UEFA Cup adventure didn’t get beyond the First Round, beaten soundly home and away by SV Hamburg for an emphatic and embarrassing 4-0 aggregate. Celtic had struggled against little-known Kosice, of Slovakia, in the qualifying round, drawing 0-0 away from home and eventually winning against 10 men with a goal two minutes from time by Jorge Cadete.

Four European games and a solitary goal to show for it. Burns and Celtic, in truth, were falling well short of expectation levels.

Possibly, the warning lights were flashing as early as the opening league fixture against Aberdeen. Celtic were leading 1-0 with only 16 minutes to go, then Alan Stubbs was sent off after gifting a penalty-kick and had to rely on a last-kick equaliser to snatch a point. After the final whistle, Tosh McKinlay was involved in a violent scuffle with a Dons player, had a verbal spat with the referee and, like Stubbs, was banned from the next game.

As far as omens went, this was not the most reassuring. 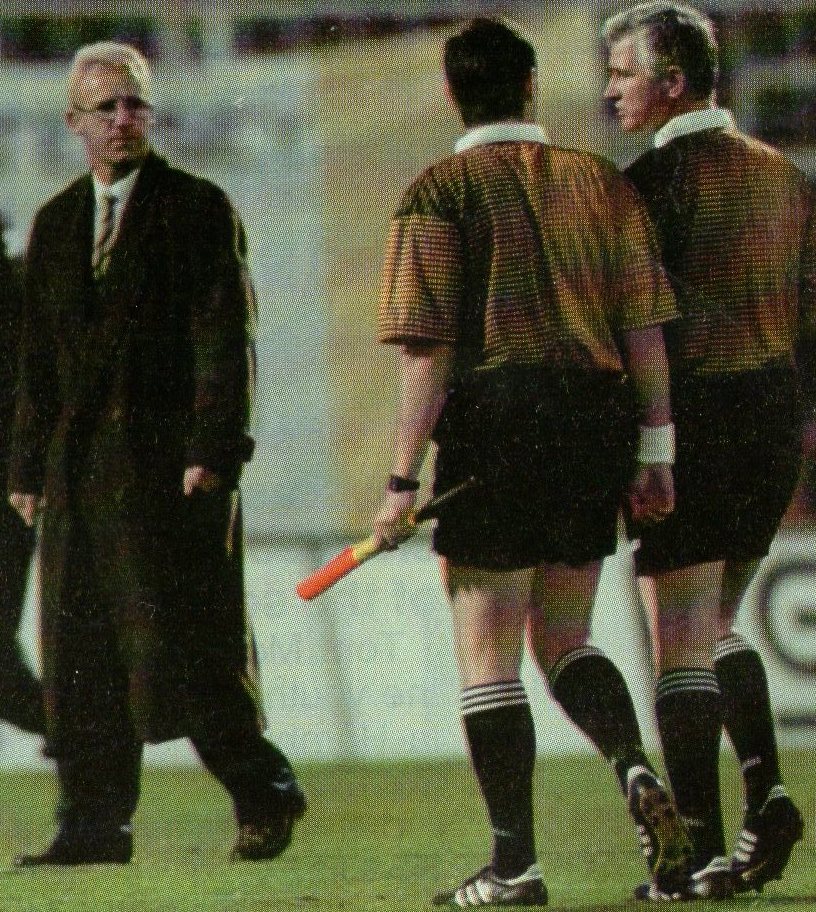 EURO EXIT…Tommy Burns looks at the referee after the 2-0 loss to SV Hamburg in Germany.

And, yet, it could have been a vastly different tale after Celtic had deservedly taken the lead following 28 minutes of sparring with Roy Aitken’s team. Pierre van Hooijdonk curled an unstoppable 25-yard free-kick over Michael Watt’s right shoulder for the opener and the travelling fans sat back in anticipation of a festival of football.

It unravelled, though, in the 74th minute when Stubbs allowed a pass from the plodding Dean Windass to slip under his boot to the equally-cumbersome Duncan Shearer. The big-money signing compounded the error by hauling Shearer to the ground. Referee Hugh Dallas had little option but to point to the penalty spot and administer a red card to the debutant.

A grateful Windass blasted the award into the net to Gordon Marshall’s left. Six minutes later, the Dons went ahead when Shearer tucked another behind the Celtic keeper. A complete horror story was averted when Jackie McNamara slung over a cross from the right and Andreas Thom thumped in a last-gasp leveller. 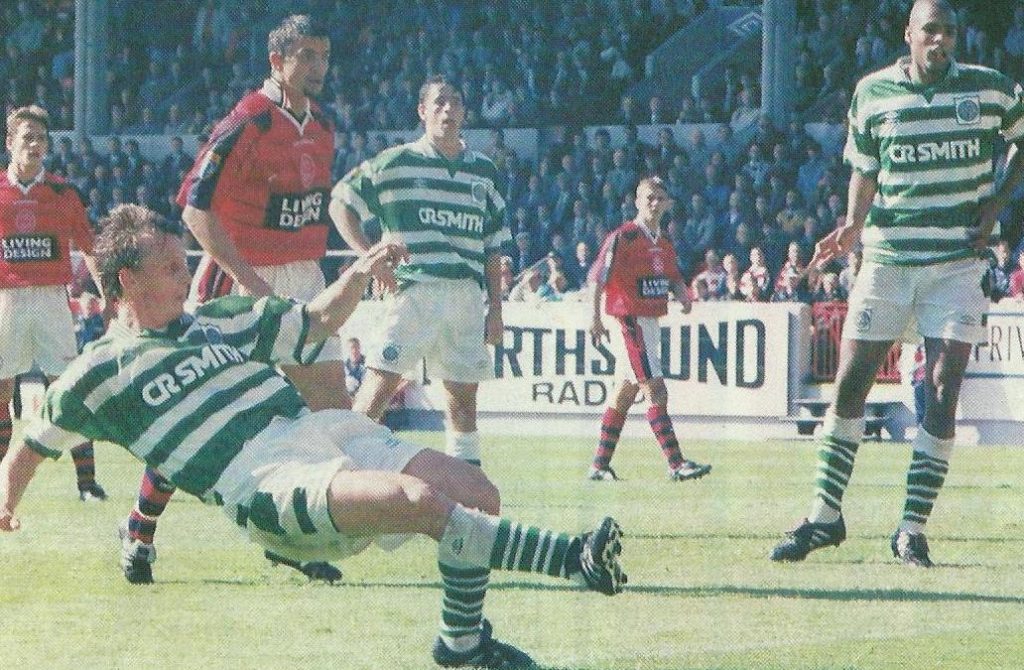 THE EQUALISER…Andreas Thom snatches a point for Celtic in the 2-2 draw against Aberdeen at Pittodrie.

McKinlay got involved with David Rowson as the teams made their way to the tunnel and then, foolishly, turned his attention to the match official. His actions were noted, forwarded to the SFA and an automatic suspension kept him out of the League Cup-tie against Clyde the following midweek. Stubbs would have company in the Broadwood stand as Celtic beat their part-time opponents 3-1.

Stubbs declared: “If we had lost, I would have sent the fans a public apology.” He added: “My debut dream went out the window.” It would be followed by many others within the next nine months.

With aspirations of progress in the UEFA Cup and the League Cup already decimated, all eyes were on their first Glasgow derby of the season on September 28 at Ibrox. Burns could have been better prepared for the occasion. A contract row with Van Hooijdonk had been simmering in the background before it blazed into the public domain.

The Dutchman had been offered £7,000-per-week, but reckoned that sort of payment was merely acceptable “for homeless people”. The quote didn’t go down well with many of the populace, including Big Issue sellers everywhere. There was obvious friction among the three main protagonists, the player, the team boss and the managing director.

Burns decided to drop Van Hooijdonk from his squad for Ibrox and, with Jorge Cadete also out with an injury, Rangers, at a stroke, realised they would not have to face the menace of two players who had already collected 17 goals between them so early in the season.

Walter Smith’s side were two points ahead after six games by the time Celtic arrived in Govan. Tommy Burns’ team were also protecting a 37-game undefeated league record. The last side to beat them had been the Ibrox outfit a year earlier.

There was a catalogue of calamity for the Celtic boss before kick-off. Van Hooijdonk, of course, had been dumped and crocked duo Paul McStay and Phil O’Donnell joined Cadete on the sidelines. Burns  took a risk on the fitness of Andreas Thom who had been nursing a rib injury.

The gamble was destined to fail and the forward was forced off after only 23 minutes to be replaced by Morten Wieghorst, a move which hardly helped the balance or structure of the line-up. Alan Stubbs was deployed in midfield with John Hughes in central defence.

In only 10 minutes, Burns could have been forgiven for believing it wasn’t going to be Celtic’s day. Paolo di Canio tricked and teased his way into a glorious shooting position, but Andy Goram managed to get a hand to the ball to divert it to Simon Donnelly. The Celtic support reckoned joy had merely been postponed for a second or two, but the youngster’s goalbound effort was frantically scrambled off the line by Gordan Petric. 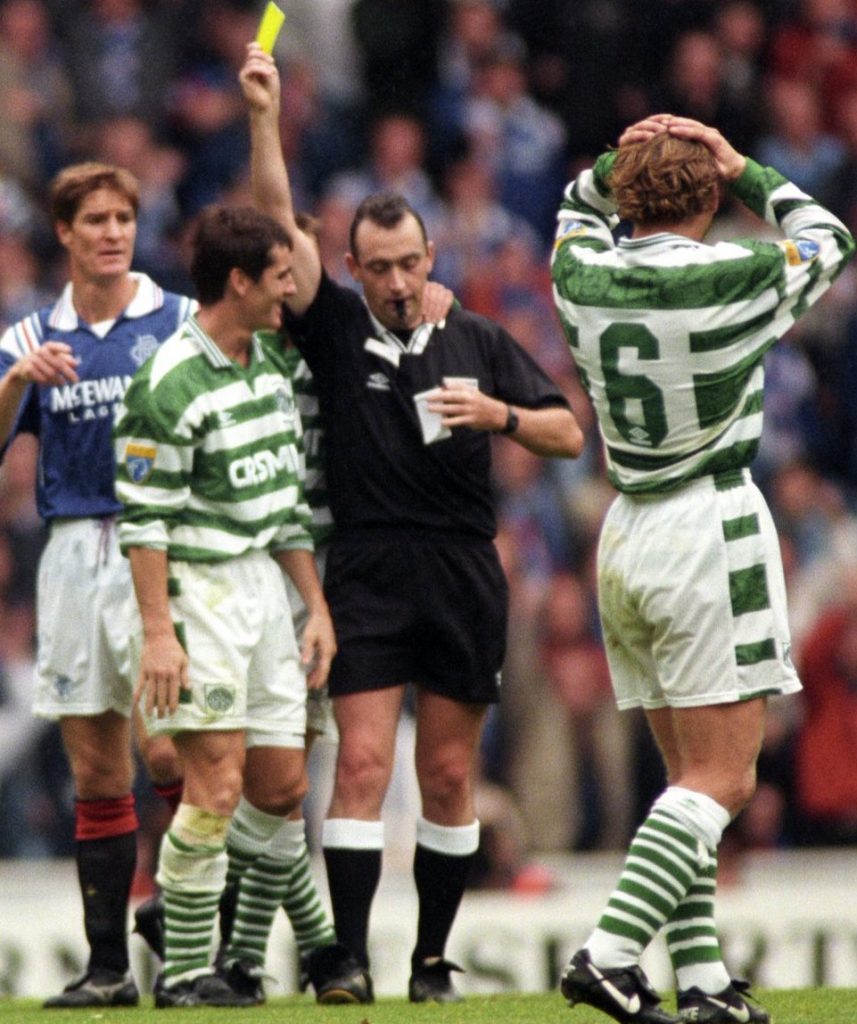 OFF…Tosh McKinlay is dismissed by referee Willie Young after his second yellow card. Dismayed Peter Grant can hardly believe it.

Paul Gascoigne, unsurprisingly, became the game’s first booking in the 19th minute for kicking Brian O’Neil as the Celt lay on the ground. He would later be joined by team-mates Richard Gough and Peter van Vossen while Celtic left-back Tosh McKinlay saw red after two yellow cards in the first-half. Colleagues Tommy Boyd, Di Canio and Hughes joined him in the book.

One Sunday newspaper reporter observed: “Referee Willie Young scattered yellow cards around like confetti and McKinlay should have been joined by Jorg Albertz after the German midfielder astonishingly escaped punishment for a most cynical piece of violent play, stamping on Brian O’Neil under the gaze of linesman Joe Kelly, who failed to notify the unsighted Young.”

Rangers took the lead against the 10 men six minutes after the interval when Gough blitzed a header past Gordon Marshall following a corner-kick from Albertz, the Ibrox club’s £4million summer signing from SV Hamburg. However, Peter Grant – and every last one of the 50,124 spectators – thought he had levelled nine minutes from time when he scorched a low drive beyond Goram. 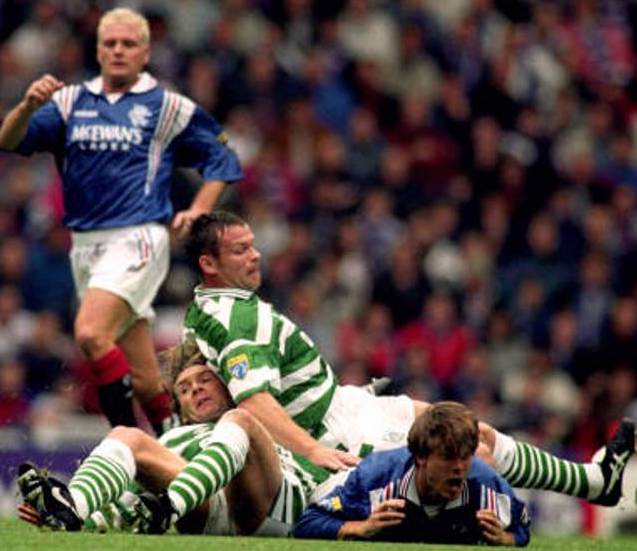 The ball smashed against the inside of the left-hand post and ran tantalisingly along the goal-line before being hacked clear. Worse was to follow a minute from the end. Hughes also left the Rangers keeper stranded with a bullet-like header. This time it whacked off the face of the bar and, within seconds with the frame of the goal still trembling, Gascoigne broke upfield to score a second for the home team.

The pass that released the Englishman was despatched by Albertz, who, by rights, shouldn’t even have been on the pitch at that stage.

Afterwards, Burns was defiant. He said: “You can write us off at your peril. We’ll see who is top of the table at the end of the season. Remember, there are still 29 games to play.”

All stirring stuff and it had been obvious to all who had witnessed the 90 minutes that Celtic hadn’t received a shred of good luck against their ancient foes, but the league table now showed Rangers, who had capitalised on Dame Fortune’s radiant smile, five points clear.

Also, they had now remained undefeated in their last seven games against the Parkhead side.

* TOMORROW: Don’t miss the EXCLUSIVE fifteenth dramatic instalment in The Tommy Burns Story – only in your champion CQN.