Celtic Quick News on News Now
You are at:Home»Latest News»EXCLUSIVE: ‘REGRETS? I’VE HAD A FEW,’ WHAT CELTIC LEGEND TOLD AUTHOR ALEX GORDON AFTER FINAL GAME
By CQN Magazine on 3rd May 2022 Latest News

I half-expected my lunchtime companion to regale me with an impromptu version of the Frank Sinatra classic ‘My Way’, which, when you think about it, wouldn’t have been totally inappropriate.

The Celtic fans celebrating the 3–1 Scottish Cup Final victory over Airdrie on Saturday, 3 May 1975 didn’t realise they were witnessing the last performance from skipper supreme Billy McNeill. The thirty-five-year-old icon had decided to get out at the top after serving eighteen years and making 790 appearances for his one and only club.

It’s maybe just as well the supporters in the 75,457 crowd hadn’t a clue about their captain’s momentous decision. It may have taken a day or two of encores from McNeill before the fans dispersed.

READ ALL ABOUT IT…Alex Gordon’s tribute book to Billy McNeill, ‘In Praise of Caesar’.

At least, now a loyal servant might have some spare time to visit his version of Fort Knox and count his medals, all twenty-three of them and, remember, he won the sum total of zilch in his first seven years as a top team mainstay. Not bad for a late starter.

McNeill collected nine league championships, seven Scottish Cups, six League Cups and, of course, the coveted European Cup. He also picked up twenty-nine international caps, turned out nine times for the Scottish League and made five appearances as a freckle-faced youth with the Under-23s.

Any regrets? ‘Actually, I do,’ answered McNeill. ‘I think I quit playing a bit too early.

‘I felt fit enough to go on for at least another year, maybe two. I discussed it with Big Jock and he thought I should go out a winner. I took his advice. On that occasion, I wish I hadn’t.’ 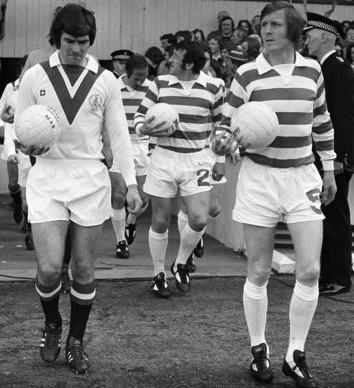 THE LAST TIME…Billy McNeill leads out his Celtic team along with Airdrie captain Derek Whiteford for the Scottish Cup Final at Hampden on Saturday May 1975.

This train of thought is in stark contrast to the one made by McNeill only days after his sudden decision. Then he went on record with, ‘I do not regret my announcement to retire from football.

‘I only hope the timing of it did not detract in any way from the team winning the Scottish Cup, that was the last thing I intended. Naturally, like everyone else at the Park, I was disappointed we did not make it ten-in-a-row in the Scottish League.

‘But even if we had won the league championship it would not have changed my mind, I would still have quit playing. I always said that when the training began to seem difficult then I would know it was time to give up and I must be honest and say I have found it hard at times in the last season.

‘I have also had a succession of niggling injuries and they have taken longer and longer to clear up. This is something that no amount of training can help. I reckon it is just one of the burdens any footballer faces late in his career. 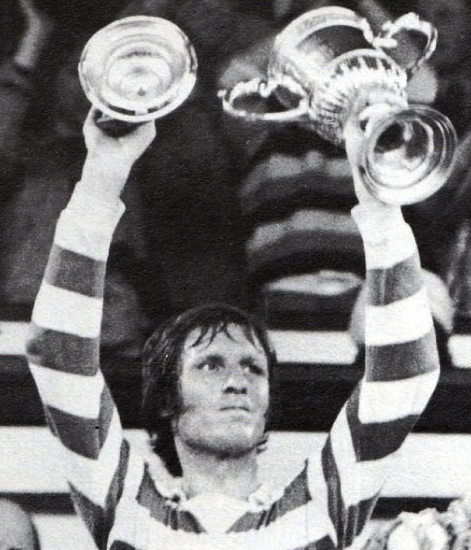 THE CUP THAT CHEERS…triumphant captain Billy McNeill holds aloft the Scottish Cup for the SEVENTH time after the 3-1 win over Airdrie.

‘Also, I have business interests outside football at the stage I really have to devote all my time to them. So, I could not think of a better time to bow out than now, when I know myself I have made the right decision.

‘Naturally, I was glad it ended in a successful Cup Final, a game in which I feel I played well. But I was not fooled by that game. I think I have enough experience and ability and the old Cup adrenalin pumped through to help me.

‘I have been fortunate that the happier days in my career at the end of it all far outnumbered the disappointments that come to any footballer.’

Jock Stein had an interesting take on his skipper’s decision to put away the football boots.

‘Billy has been the cornerstone of the team for such a long time, a player I have known personally since he was a schoolboy and I was coach at Celtic Park,’ he said. ‘His departure is the end of an era for he has been a wonderful example as a player and as a club captain for so many years. 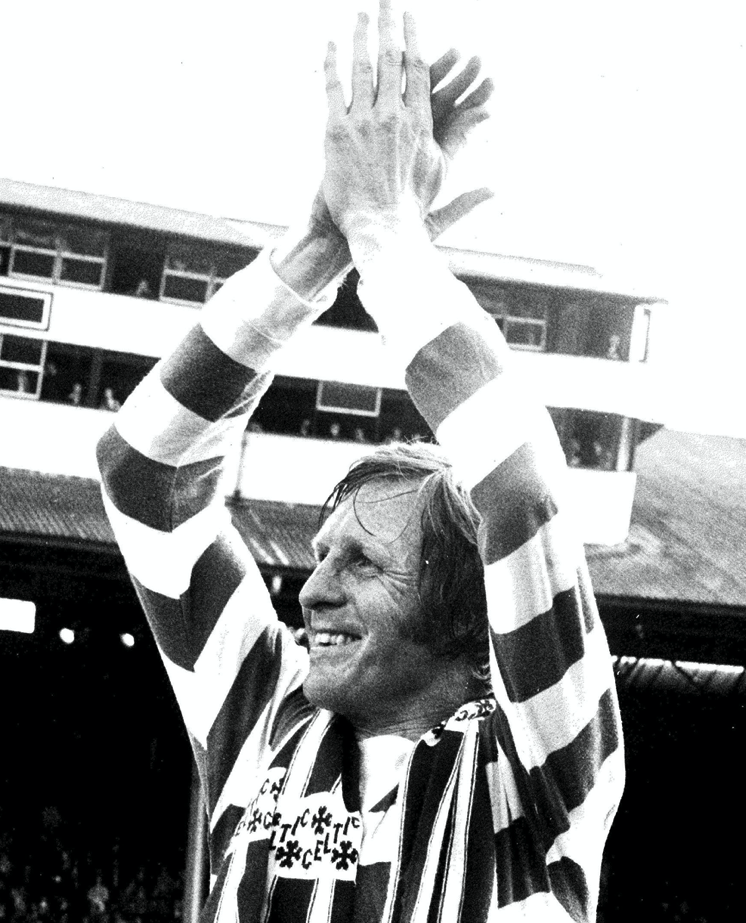 THE FINAL FAREWELL…Billy McNeill takes an emotional last bow at a packed Hampden.

‘But I said at the time of his retirement that I felt he had made the right decision and I am sure Billy knows that, too.

‘When Celtic won the Scottish Cup in 1965 and we then swept on to even greater success, Billy McNeill was twenty-five years of age and an experienced, established international player.

‘If a young player eventually takes over, he will play his own game, do things his own way and that is how it should be.’

I was in the crowd that emotional afternoon when McNeill took his final curtain call.

Billy McNeill, for the last time ever, led out the Celtic team alongside Airdrie skipper Derek Whiteford on a fine May afternoon. Referee Ian Foote blew to begin the confrontation and McNeill, and not too many others, had the knowledge his Celtic career had only another one-and-a-half hours to go. 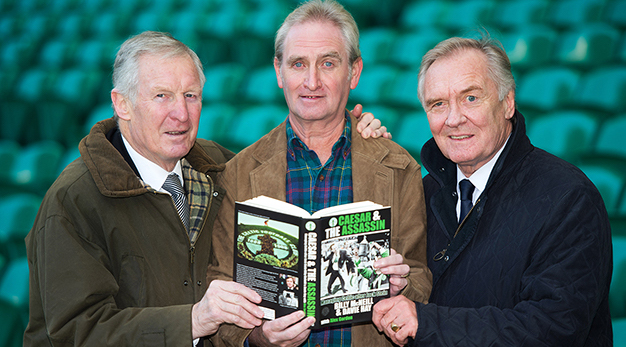 THREE CHEERS…author Alex Gordon is flanked by Celtic legends Billy McNeill and Davie Hay at the launch of his tribute book to the former managers, ‘Caesar and The Assassin’, which was published by CQN in 2014.

In the fourteenth minute, nerves were settled when Paul Wilson expertly headed a cross from Kenny Dalglish beyond keeper Davie McWilliams. In two incredible minutes just before the break, the Broomfield part-timers glimpsed glory only for it to be snatched away in quickfire fashion.

Right-winger Kevin McCann followed up with a blistering drive high into the net after two efforts from team-mates had been blocked. Celtic replied by racing down the pitch and forcing a left-wing corner-kick. Bobby Lennox swung it in and Wilson was unmarked to dash in and head a second goal.

Eight minutes after the turnaround, Lennox was sent tumbling in the box and the match official had no hesitation in pointing to the penalty spot. Pat McCluskey drilled the award wide of the diving McWilliams.

At full-time, Billy McNeill raised his arms to the heavens and accepted the cheers of the joyous fans – just as he had done ten years earlier against Dunfermline.

In the space of a decade, he had started – and ended – an era.