TOMMY BURNS set his sights on silverware in his first season as Celtic manager after returning to the club on July 12 1994.

The fans’ favourite had winced as he witnessed the Hoops losing in a dramatic penalty-kick shoot-out to First Division Raith Rovers in the League Cup Final at Ibrox only four months after his appointment.

The league was blown, but the Scottish Cup was up for grabs.

In another CQN EXCLUSIVE series, we chart Tommy Burns’ career as the Hoops gaffer during turbulent times on and off the field. Here is the fourth instalment from Alex Gordon’s tribute book, ‘The Winds of Change‘, which was published by CQN in 2015.

THE Scottish Cup was looming into view and two-and-a-half weeks after Pierre van Hooijdonk’s introduction, he lined up alongside Willie Falconer in attack for the Third Round encounter against First Division St Mirren on January 28 1995 at Hampden.

Campbell Money, sturdy and reliable without being showy, decided to turn in the sort of display every goalkeeper dreams about. With admirable athleticism, he twisted and turned throughout his full repertoire and Tommy Burns and Co must have wondered if a breakthrough goal was ever going to arrive.It duly did in the 68th minute when Falconer materialised at the edge of the six-yard box to flash a ferocious header past the heroic Money, the ball zipping in just under the crossbar. Tommy Boyd provided the ammunition with a finely-judged cross from the right.

Four minutes later, the keeper conceded again and the Celtic fans could breathe a little more easily. John Collins launched over a diagonal cross from the right, Falconer again proved to be unbeatable in the air as he climbed at the back post to head across the six-yard line. Van Hooijdonk waded through a posse of Saints defenders to bundle the ball over the line. 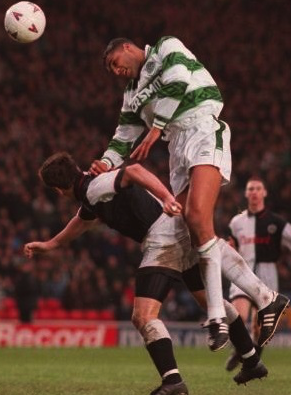 Burns observed, ‘Our patience paid off. Big Pierre scored the type of simple goal that we haven’t netted enough of this term. We’ve been crying out for someone who can just stick tap-ins away.

‘At the start of the season, we said we wanted to get to a Cup Final and we have achieved that already, although ultimately the Final of the League Cup was a major disappointment. So, after losing one Cup, we will just have to go and get ourselves another one.’

On February 18, the Dutchman, swiftly becoming a favourite among the Celtic following, went one better in the 3-0 win over Meadowbank Thistle at the next stage of the competition.

It was a breeze for the Bhoys who scored their goals in the first-half. The first from Big Pierre was worthy of winning any trophy as he combined pace, power and precision in one breathtaking moment of splendour.

Falconer flicked the ball into his path and the confident striker, racing in at the edge of the penalty area, caught it sweetly with his right boot and his effort whipped high past the keeper into the roof of the net.

Van Hooijdonk then rattled the face of the crossbar with a header and Falconer followed up to push the rebound over the line for the second. 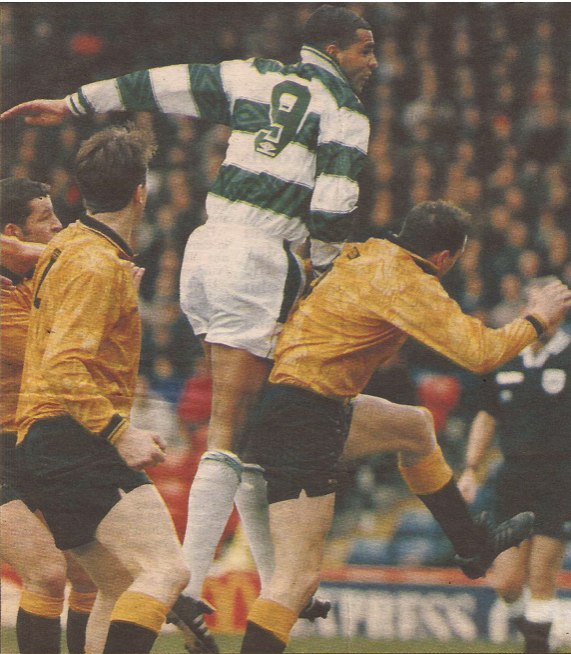 And it was Pierre who netted the third when he galloped onto a pass on the left-hand side of the box and calmly slotted the ball across the stranded Steve Ellison into the far corner. Remarkably, it was the first time Celtic had won by three clear goals since beating Partick Thistle in a league game on November 6 1993.

Pat Bonner, in particular, was excited when Celtic drew Kilmarnock at the quarter-final stage. Ironically, the popular shotstopper could have been lining up in the opposite goal at the national stadium. Bonner’s 16-year crusade at Parkhead had apparently come to a halt the previous summer when he was told the news he was being released by Lou Macari.

Celtic had just returned from a 1-1 draw against Aberdeen at Pittodrie on the last day of the season when Macari made his announcement. Charlie Nicholas, too, was on the way out. Bonner didn’t waste any time in getting fixed up with a new club as he agreed to join former Parkhead team-mate Tommy Burns at Kilmarnock.

But within weeks, Burns and his assistant Billy Stark walked out of the Ayrshire club to return to Celtic. Bonner quickly followed and admitted, ‘I had spoken to Tommy and the Kilmarnock chairman about going to Rugby Park. It would have been a wrench to leave Celtic after all those years, but there was a new challenge for me there.

‘Then Tommy took over at Celtic and invited me to join him. Suddenly, I found I had a new challenge back at Parkhead.’ 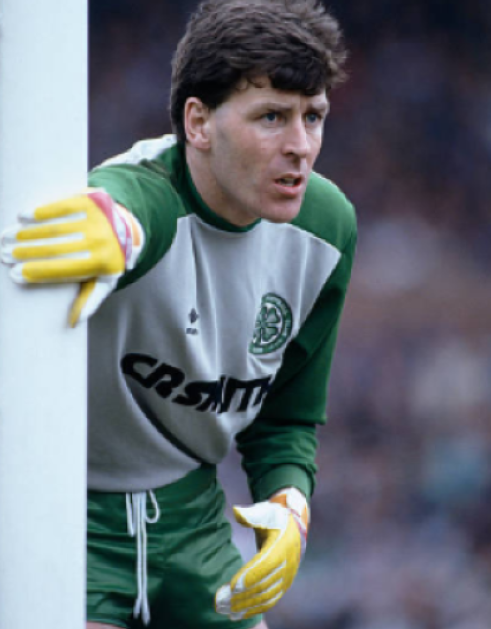 MAN ON A MISSION…Pat Bonner focused after a quickfire return to Celtic.

Looking at the forthcoming tie, Bonner said, ‘It’s a big game for us. We’ve been in one Cup Final this season and we still wonder how we lost it. We have an opportunity to get to another one. We are one step from the semi-finals and if we can get to two Finals that will be a big improvement on the past few years.

‘The fans have done well to stick it out. Now they seem to want success quicker than ever because of the changes that have been made at the club. But a few changes don’t necessarily mean it is going to come rapidly.

‘We are working on a three-year plan. We are trying to build a team which can get back to winning titles, playing in Europe, and, hopefully, one day qualifying for the Champions League. Those are the goals.’ 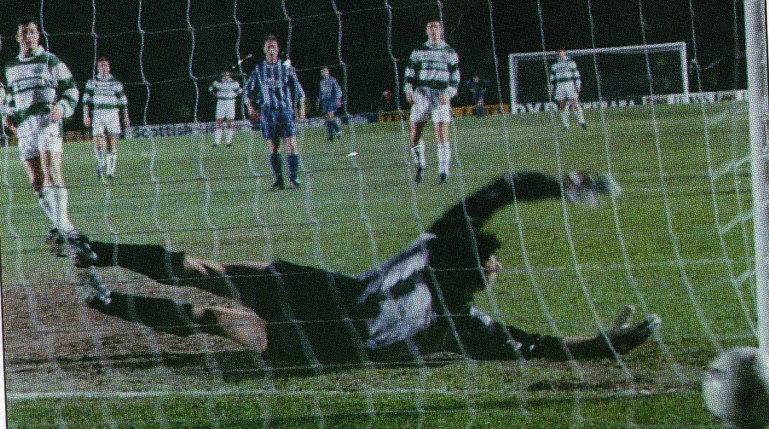 Hampden was plunged into darkness for 23 minutes when the floodlights failed, but there was a shaft of light before the interval when Paul McStay illuminated proceedings. The Celtic captain checked inside past a frantic challenge and threaded a superb pass into the tracks of Brian McLaughlin who was crudely tugged back by panicking defender Tom Black.

It was a stonewaller and John Collins tucked the award away from Dragoje Lekovic low down at the keeper’s right-hand post. In the second-half, Falconer was out of luck as he tried to soothe the jangling nerve-ends of the home support when he turned swiftly to fire in a low shot that thumped against the base of the post.

IN WITH A SHOUT…Tommy Burns has something to say.

However, Celtic held on for the one-goal win and Burns was only 90 minutes away from a second Cup Final appearance in his first year in charge.

‘I’m absolutely delighted,’ he said afterwards. ‘It was a big effort from all the fans and the players put together. It was a fantastic result. Every one of my players ran themselves into the ground.

‘I couldn’t have asked for more and I’m happy for them and the supporters.’