DAVIE HAY was on the brink of title glory in his third year as Celtic manager after taking over from Billy McNeill on July 4 1983.

The former Hoops and Scotland international midfielder took over the hot seat as a rookie boss at the age of 35.

Hay led the team to an exciting Scottish Cup triumph in his second term, but his priority target was the championship and the Parkhead gaffer and his players were involved in one of the most remarkable climaxes in the race for the flag when it all came down to one game.

It’s a tale that takes pride of place in the club’s folklore and in another CQN EXCLUSIVE, we look at the deciding day in Paisley with the inside story from his 2009 autobiography, ‘The Quiet Assassin,’ co-authored by his long-time friend and writer Alex Gordon.

A NATION waited with bated breath at the grand finale to an enthralling 1995/96 season as we prepared to play St Mirren in my hometown of Paisley on Saturday May 3 1986.

The curtain was about to come down on a nerve-shredding crescendo to a rollercoaster campaign, but you may be surprised to learn I believe Celtic went a long way to clinching that title on the FIRST day of the campaign.

It’s funny how people can so often overlook the obvious. We were losing 1-0 to Hearts at Tynecastle on day one of the league programme after my former player John Colquhoun put the home side ahead. Obviously, we couldn’t have even guessed at how important events would eventually unfold if we didn’t get something from this match.

PAUL RIGHT NOW…Celtic midfielder Paul McStay fires a low shot beyond Hearts keeper Henry Smith for the crucial last-gasp leveller at Tynecastle on the opening day of the season.

We pulverised their defence as we searched for the equaliser. It didn’t look as though it was going to be our day, though. The referee was glancing at his watch when a ball was squared from the right and Paul McStay, racing towards the penalty box, struck his shot with devastating power and wonderful accuracy.

Henry Smith had been a giant in goal for the Edinburgh men that August day and I realised it was going to take something extra special to beat him. Paul came up with that required ingredient with only seconds to go and we got our leveller in a 1-1 draw.

We were to discover just how absolutely vital that gem from our gifted midfielder was when we lined up against St Mirren in Paisley thirty-five games and nine months later. 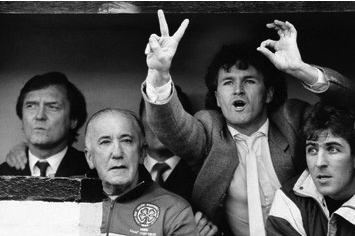 KEEPING CALM…Davie Hay continues to concentrate in the Love Street dug-out as Davie Provan lets his Celtic team-mates know it is 2-0 for Dundee against Hearts at Dens Park.

FLAG HAPPY…Danny McGrain, who had been substituted, prepares to join the celebrations while Bobby Lennox and masseur Jimmy Steele join in. Davie Hay remains focused – for the moment.

There are defining moments in football and in life when you realise the gods are smiling on you. One such occasion arrived on that May afternoon in the town of my birth.

I had watched a sports programme the night before and I was left with the impression that the trophy was as good as already in the Tynecastle trophy cabinet. I was well up for the challenge. I told my players before the game, ‘It can be done. We can win this title.’

As rallying speeches go, it wasn’t quite Churchillian, but it got the message through to my guys. They nodded and, once again, I detected a ruthless determination in my players. There wasn’t a quitter in sight.

We were five goals ahead against St.Mirren before the hour mark and I was standing on the touchline in awe of my own team. Everyone remembers Brazil’s fourth goal against Italy in the mesmerising World Cup Final in Mexico in 1970. 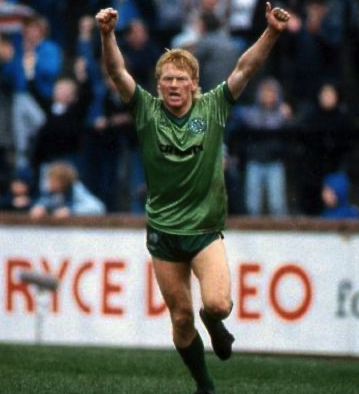 GOAL OF THE SEASON…Mo Johnston races away after scoring a breathtaking strike against St Mirren at rain-soaked Love Street.

I’m talking about the one where it seems every Brazilian player gets at least three touches of the ball before Pele nonchalantly rolls a pass across to the right where the rampaging Carlos Alberto comes thundering in to first-time an almighty effort low past the bewildered and beaten Enrico Albertosi, the Italian goalkeeper. It was a fitting end to a glorious and memorable World Cup.

Take it from me, Celtic scored a goal against St.Mirren that was every bit as good and it was just a pity that the planet wasn’t tuned in to witness it. Danny McGrain, a truly world-class right-back, started it on the edge of his own penalty area. He moved the ball to Murdo MacLeod who gave it back to Danny as we were swiftly building a move down our right-hand side.

Danny shifted it inside to Paul McStay who switched it to Roy Aitken and once again the ball landed at Danny’s feet. He touched it on to Brian McClair and he flashed a ball across the face of the Saints goal. Mo Johnston, lurking in the danger zone as usual, came sliding in at the back post to nudge the ball into the net. 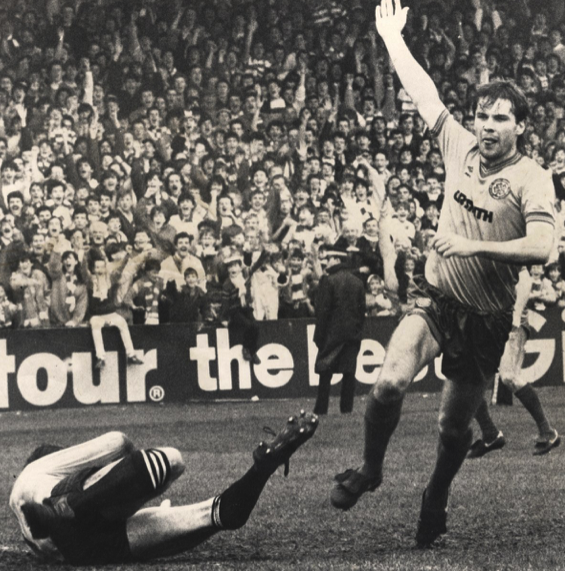 LET’S GET THE PARTY STARTED…Brian McClair celebrates after sticking No.1 behind Saints keeper Jim Stewart.

It was all done at bewildering speed and it is right up there with any goal I have ever seen scored by any side. It was enough to win the title on its own.

However, it all looked as though it was going to be of no avail. Johnston (2), McClair (2) and McStay had us 5-0 ahead after fifty-four minutes, but Hearts were hanging on at Dens Park.

It had been goalless at the interval and we were in the dark about what was happening in the second-half. We didn’t have a radio in the dug-out as I didn’t want any distractions and, remember, these were also the days before mobile phones.

READ ALL ABOUT IT…Celtic’s championship-winning 1985/86 season is covered extensively in Alex Gordon’s tribute book ’50 Flags Plus One’ that covers fifty-one of the club’s untainted titles.

After eighty-three minutes at Love Street, we were coasting to what might have been an impressive, but ultimately meaningless, victory. Then something quite amazing happened. I remember Saints keeper Jim Stewart had the ball in his hands and was about to launch it downfield when a huge roar came up from the terracings.

He looked startled for a moment. Our fans were going doolally. We all knew what had happened – Dundee had scored. I knew there were two players named Kidd on the pitch that afternoon, Hearts’ Walter and Dundee’s Albert. I was told Kidd had scored and, by the reactions of our support, I didn’t have to enquire which one.

There was unconfined joy as the fans danced jigs everywhere and then there was another massive cheer. Dundee had scored again. The title was ours! Albert Kidd had netted a second and that was that. Hearts had slipped up, but, all credit to them, they made it one helluva championship run-in. 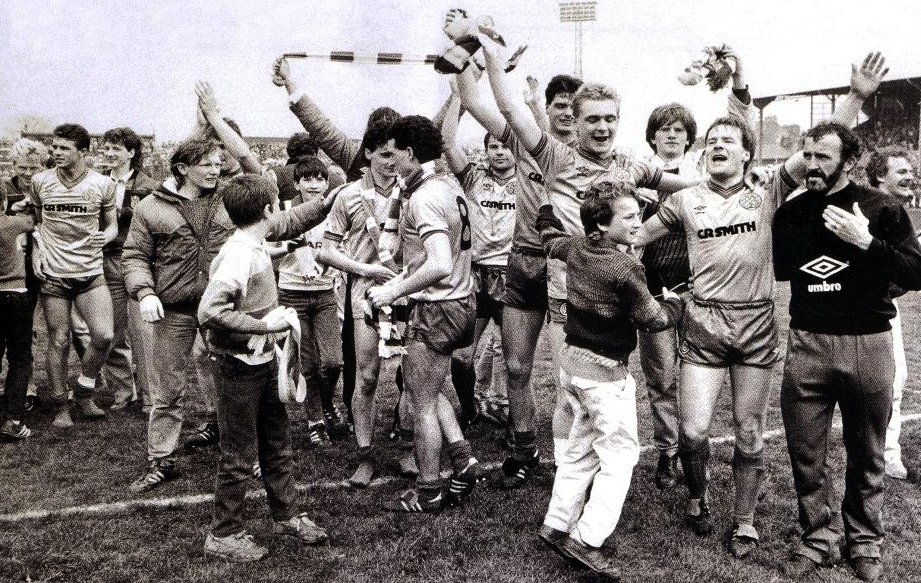 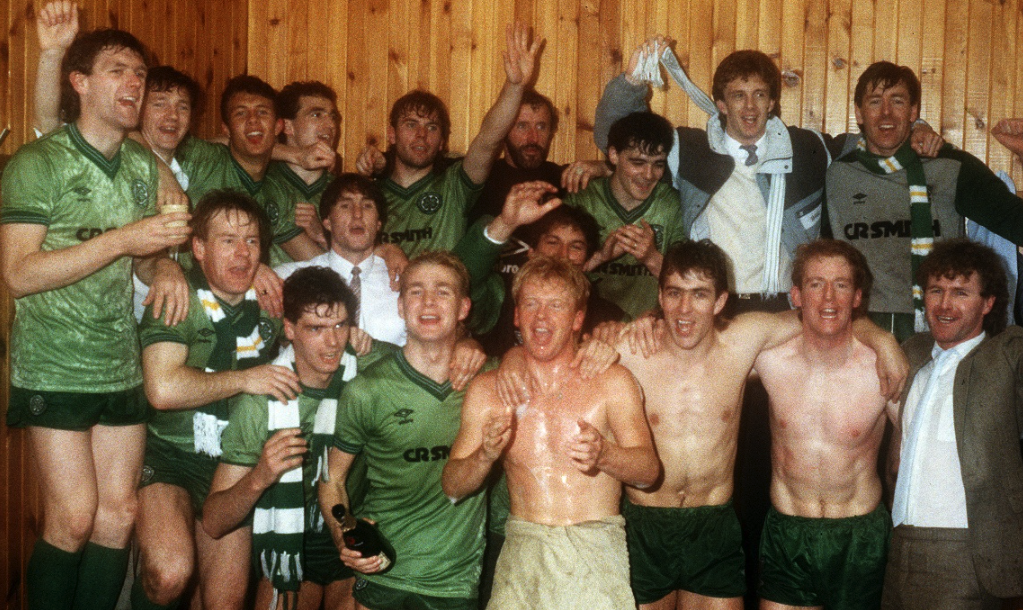 GREEN FOR GO…the Celtic players celebrate the 5-0 title win over St Mirren to bring the club their 34th flag.

I always liked Albert Kidd, by the way. He was signed by Ally MacLeod from Arbroath and played for me at Motherwell. I could never have guessed the landmark role he was to play in my career.

I must state here and now that we were NOT lucky in being crowned Premier League kings. The league race, as is so often claimed, is a marathon and not a sprint. The best team over thirty-six games deserve to be the winners.

It was tight, but we were the champions on merit. We were the league’s top scorers with sixty-seven goals. We were locked on fifty points with Hearts, but, in goal difference terms, we were plus twenty-nine and they were plus twenty-six. That was the winning margin. 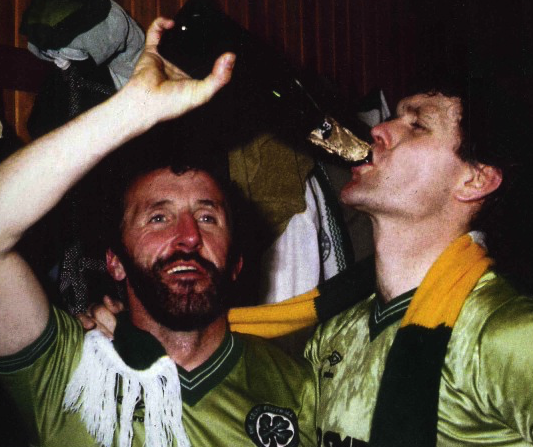 CHEERS…Danny McGrain and Roy Aitken enjoy some bubbles after an epic victory.

After we celebrated our momentous triumph, I could look forward to my summer break and I was ready to come back for the new season re-invigorated and ready to build on our league success.

I had already pinpointed some players I wanted and I realised our defence would need strengthening.

We were scoring goals, but we were leaking them, too. I was already preparing for another exciting campaign.

A year later I was out of a job.