TOMMY BURNS refused to throw in the towel as the pressure mounted in his third year as Celtic manager during the turbulent 1996/97 crusade.

In another CQN EXCLUSIVE series, we chart Tommy Burns’ career as the team’s gaffer during turbulent times on and off the field. Here is the eighteenth instalment from Alex Gordon’s tribute book, The Winds of Change, which was published by CQN in 2015.

CELTIC’S lowest home crowd of the season – 45,374 – watched the team take on Motherwell only two days after losing unluckily and controversially to Rangers in the punishing schedule that would see Tommy Burns’ men play a total of six league games in January 1997.

It couldn’t have been a surprise to anyone that Paul McStay was missing from the line-up. Alan Stubbs was out, too, and Tommy Boyd took over as captain. The fans who stayed away missed a scintillating five-goal performance from Celtic with Fir Park keeper Steve Woods the busiest man in the east end of Glasgow that crisp, biting afternoon.

Woods, of course, would return to Parkhead as an excellent and influential goalkeeping coach once his playing days were over. However, he must have been relieved to get as far away from the ground as possible that afternoon after being put through 90 minutes of sheer misery. 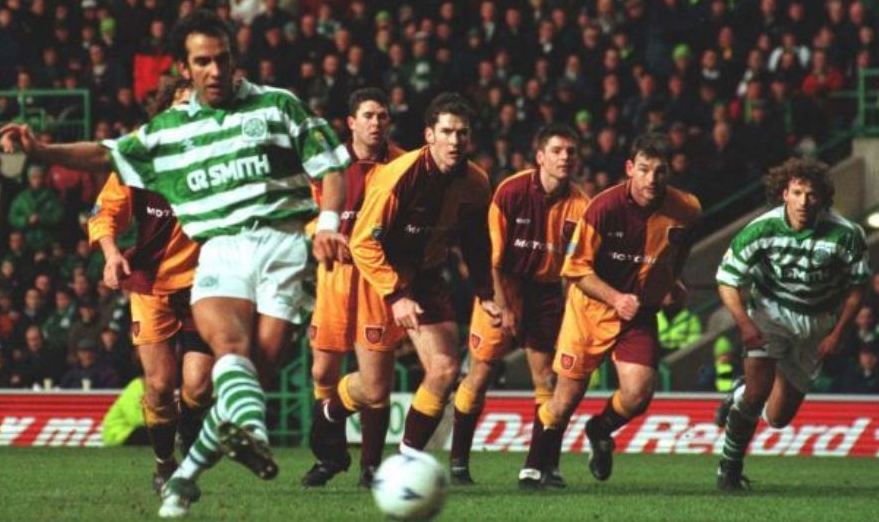 ON THE SPOT…Paolo di Canio slides in a penalty-kick against Motherwell with Jorge Cadete looking on.

Paolo di Canio stroked home a smooth penalty-kick in the 28th minute to get things started and Pierre van Hooijdonk, now being linked with a move to West Ham almost on a daily basis, knocked in a second just before the break.

Jorge Cadete got in on the act in the 75th minute with the third and Woods was left exhausted and helpless after conceding two goals in the space of two minutes near the end. The Portuguese striker hit No.4 and Morten Wieghorst made it five.

The Celtic manager observed: “This result showed the mettle of the team. It was always going to be a difficult game coming so soon after the bitter disappointment of losing at Ibrox, despite playing so well.

“There’s always a worry that there might be a reaction, but we were very positive from the off and the result was good for the goals for column and good, too, for the fans who were certainly entertained. We’ve always said we wouldn’t give up the title chase at any stage.” 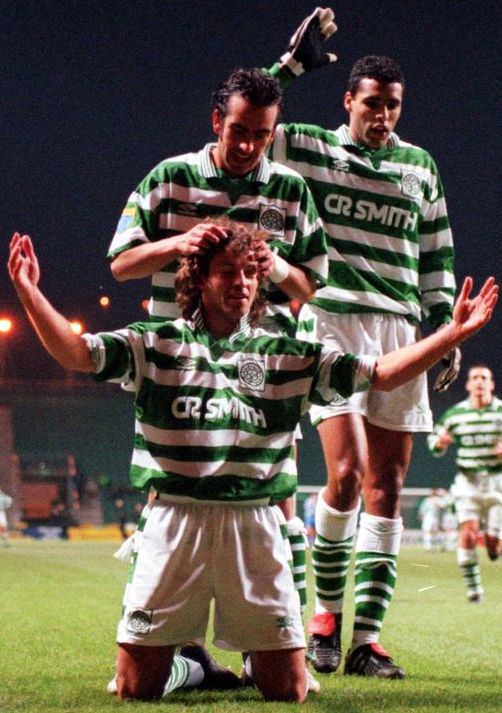 HAIL THE HAT-TRICK HERO…Jorge Cadete is congratulated by Paolo di Canio and Pierre van Hooijdonk after netting one of his trio against Kilmarnock.

Four days later at the same venue, a hat-trick from Cadete helped Celtic to go one better against Kilmarnock with three goals in the last 10 minutes putting a gloss on the 6-0 scoreline. Jackie McNamara, Wieghorst and Chris Hay got the others in a performance that left Burns’ team 11 points behind their Ibrox rivals with a game in hand.

The quote of the day belonged to Cadete who revealed: “I believe it is still possible to catch Rangers in the championship. If I did not have that belief, I would ask the manager if I could go on holiday.”

Thankfully, he was still around on a cold, wet and blustery Tuesday evening on January 14 at Stark’s Park where Celtic were 17 minutes away from a dreadful result. Danish striker Soren Andersen shot the Fifers into the lead in the 13th minute and after that it was all about Raith Rovers’ resistance against opponents who were finding it difficult to cope with the appalling conditions.

However, Cadete managed an equaliser in the 73rd minute and Hay, a late substitute for Simon Donnelly, snatched the winner with two minutes remaining. A relieved Burns said: “We gave the players a bit of stick at half-time and told them we needed courage to win. Rovers’ pitch doesn’t lend itself to good football, but our will-to-win spirit was the most pleasing thing for me.”

POWER AND PRECISION…Pierre van Hooijdonk prepares to launch a free-kick into the Hibs net.

The following Saturday at Parkhead, Celtic breezed through a 4-1 victory over Hibs with Van Hooijdonk (2), Brian McLaughlin and Cadete on target while Kevin Harper hit a late consolation effort for the men from the east. The Portuguese attack leader had now claimed nine goals from his past five outings and, overall, an extremely-laudable 22 strikes in 24 games.

He was on the scoresheet yet again on the final Wednesday of the month, the 29th, as Celtic overcame Dunfermline 2-0 at East End Park with a lot more ease than the tight scoreline would suggest. Paul McStay claimed his only league goal of the campaign to open the scoring in the 38th minute and Cadete doubled the advantage two minutes later.

“When we fell 14 points behind Rangers after the Old Firm game, everyone said it was the end of the world,” reflected Burns. “But the players deserve great credit for what they have achieved since then. They have hung in there and shown they are prepared to battle and scrap.”

So, Celtic’s sprint through January after the setback in Govan read: Played five, won five, goals for 19, goals against two and points 15. It had been a faultless reply to 1997’s disappointing entrance. Interestingly, Rangers had four games over the same period and won three – Hibs (2-1), Aberdeen (4-0) and Motherwell (3-1) – but dropped two points in a 1-1 draw with Kilmarnock at Rugby Park. 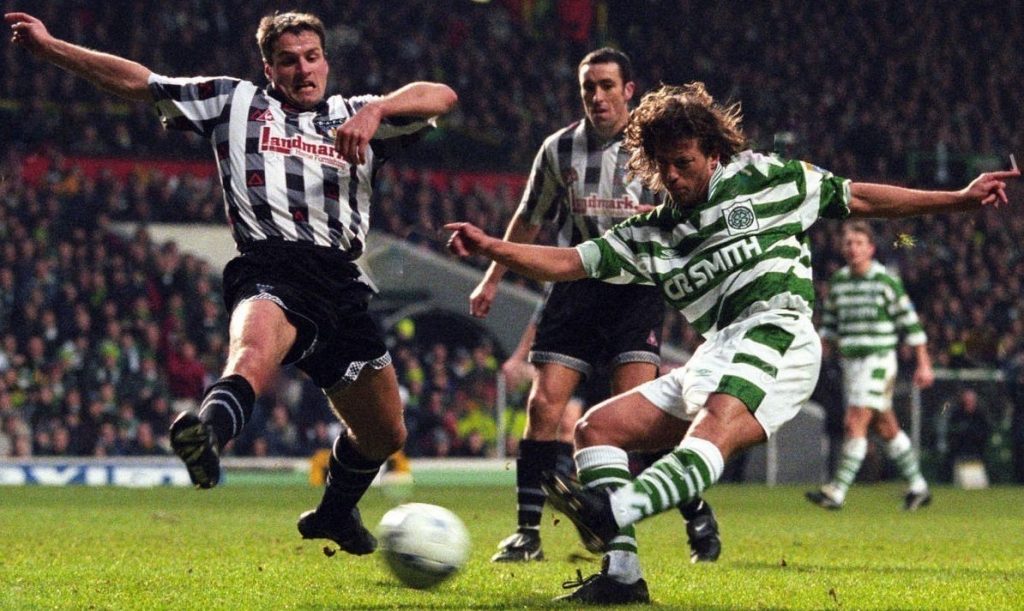 ON TARGET…Jorge Cadete fires a left-foot shot into the Dunfermline net.

On February 1, Rangers shed two more points in a goalless home draw against Hearts, but there was little by way of celebration in the east end of the city; Celtic had been turned over 1-0 by Dundee United at Tannadice, losing out to a goal two minutes from time. It didn’t ease the despair that the winner had been scored by a player rejected by Walter Smith.

The Parkhead men travelled back from Tayside fully in the realisation they had shot themselves in the foot. Paolo di Canio, on two occasions, Jorge Cadete, normally so deadly, and Paul McStay all missed chances and, right on cue, in the 83rd minute Gary McSwegan, not rated by Rangers, replaced Robbie Winters. The substitute took five minutes to catch up with the tempo before seizing onto a long pass, twisting beyond Jackie McNamara and lobbing the ball over Stewart Kerr.

And, with awesome simplicity, Celtic were undone. 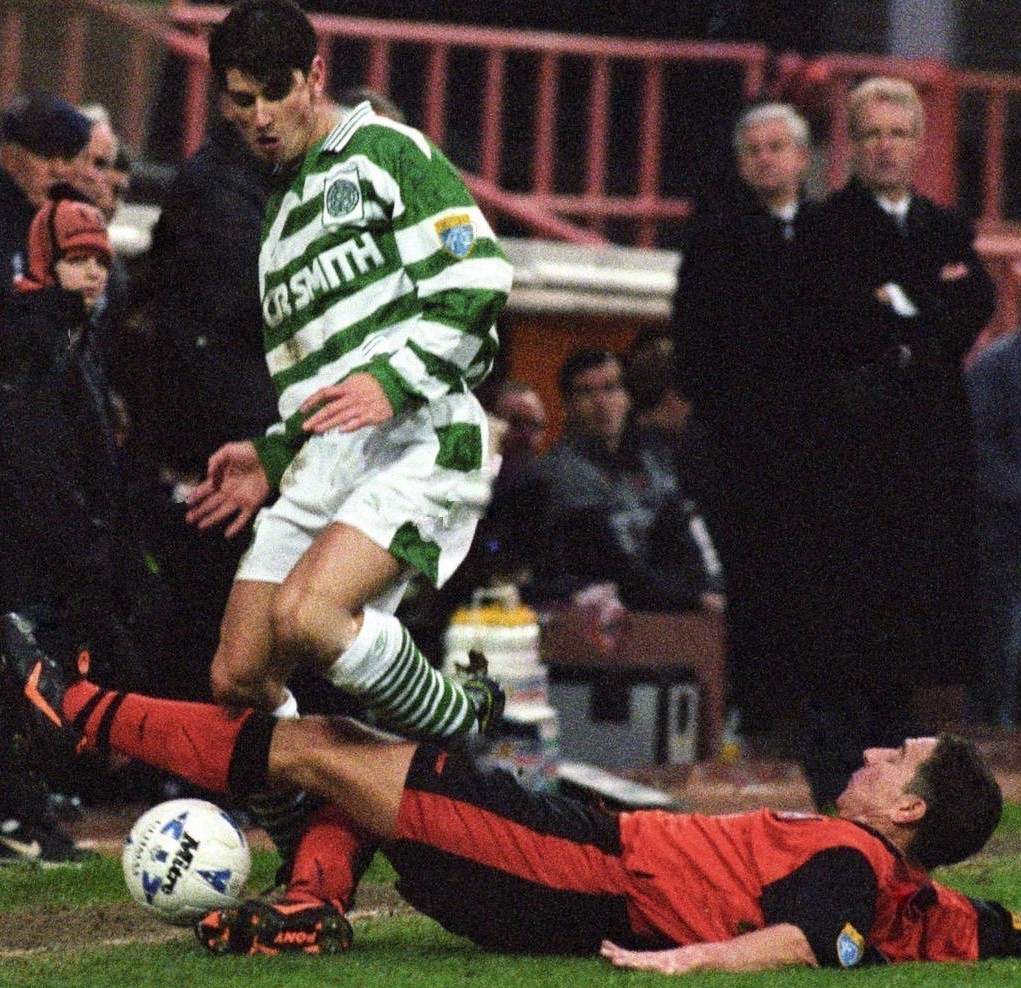 GOING DOWN…Jackie McNamara is crash-tackled by former Celt Jim McInally as the Hoops topple 1-0 to Dundee United at Tannadice. Tommy Burns looks on from the touchline.

Burns remained remarkably philosophical in the circumstances, saying: “It is not a question of us and Rangers winning every match between now and the end of the season. Footballers are only human and people should remember that. We have had a good run of games and the law of averages dictates that we must lose sometime.

“Indeed, we haven’t had many games to rue in the last 20 months. There is a long way to go and the race moves on to another stage. We didn’t deserve to lose. Our players worked very hard against a much improved United side, although we conceded a bad goal.

“There won’t be many teams that come to Tannadice and make the number of chances we did. Over the piece, our players gave their all.”

* TOMORROW: Don’t miss the EXCLUSIVE nineteenth dramatic instalment in The Tommy Burns Story – only in your champion CQN.