Celtic Quick News on News Now
You are at:Home»Exclusive Series»EXCLUSIVE: ‘WE HAVE LEARNED FROM THE EXPERIENCE’: THE TOMMY BURNS STORY (Part Five)
By CQN Magazine on 16th July 2022 Exclusive Series

TOMMY BURNS was determined to win silverware in his first season as Celtic manager after returning to the club on July 12 1994.

The chance to achieve his goal after only four months was obliterated in a dramatic penalty-kick shoot-out to First Division Raith Rovers in the League Cup Final at Ibrox.

With the league already slipping away, the Scottish Cup came sharply into focus.

In another CQN EXCLUSIVE series, we chart Tommy Burns’ career as the Hoops gaffer during turbulent times on and off the field. Here is the fifth instalment from Alex Gordon’s tribute book, ‘The Winds of Change’, which was published by CQN in 2015.

CELTIC went into the Scottish Cup semi-final draw alongside Edinburgh duo Hibs and Hearts while Airdrie represented the First Division.

The Tynecastle side had knocked out Rangers at the second hurdle, hammering them 4-2 in Edinburgh. Like the Parkhead side, though, their league form was erratic.

The ballot paired Celtic with Hibs, the game taking place on Friday night, April 7 1995, at Ibrox for the benefit of the TV cameras. Hearts would play Airdrie at Hampden the following afternoon.

The Battle of the Greens, so often a classic fixture in the past, didn’t live up to its billing. It became a slog with the defences and midfields dominating. Chances were few and far between, but Celtic had the perfect opportunity to book their place in the Cup Final when they were awarded a penalty-kick in the 73rd minute. 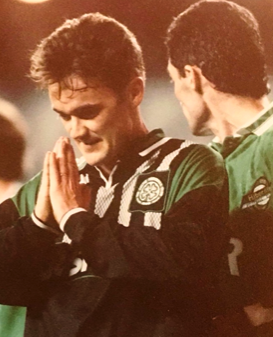 WITHOUT A PRAYER…Andy Walker is downcast after missing a crucial penalty-kick against Hibs.

Referee John Rowbotham pointed to the spot after Pat McGinlay, who had rejoined the Easter Road side after being discarded by Tommy Burns, brought down Paul McStay. It was a touch-and-go decision by the match official with the initial challenge taking place around the edge of the box.

John Collins and Andy Walker both elected to take the award as the experienced Jim Leighton steadied himself on his line. Walker won the squabble, placed the ball on the spot and looked horrified as his shot, hit with power, was anticipated by the Hibs keeper who fisted the ball to safety. Ironically, it was the same goal where McStay had failed against Raith Rovers.

Burns, though, remained upbeat after the bizarre incident. He said, ‘There were two of our players fighting to take the kick and that’s not a bad thing. We leave it to the players in form to decide who takes the penalty-kicks. Walker wanted to take it and, while John Collins was also ready, it would have taken a blow torch to get the ball off Andy.’ 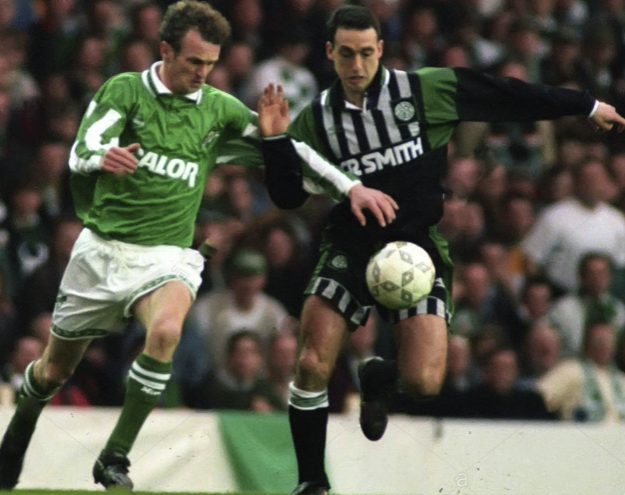 The following day Airdrie shocked Hearts 1-0 with a Steve Cooper strike on the half-hour mark to make sure of their place at Hampden on May 27. Celtic and Hibs had to do it all again four nights after the original stalemate and this time there was no mistake from the Parkhead men.

Willie Falconer got the show on the road when he raced onto a superbly disguised pass from McStay and finished with an unstoppable angled drive that saw Leighton clutching air as it sped past him at the far post. And the keeper was stranded again when Collins doubled Celtic’s advantage with as sweet a goal as he ever scored at Ibrox – and the midfielder was racking up a few memorable efforts at the Govan ground.

Collins was 25 yards out when he dragged the ball onto his left foot and, uncannily, without looking up to monitor Leighton’s positioning, arced the ball high into the top right hand corner. The goalie didn’t move a muscle; he knew it was a goal as soon as it left Collins’ gifted left foot. It was a delightful piece of invention from the midfielder. 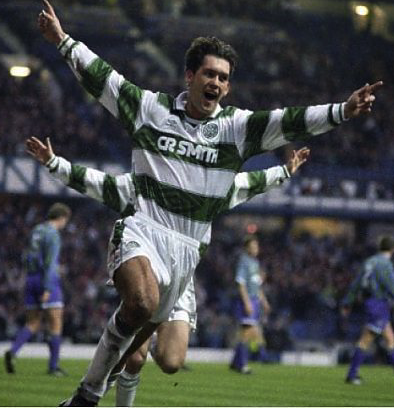 BREAKTHROUGH…Willie Falconer celebrates the opening goal in the semi-final replay against Hibs. 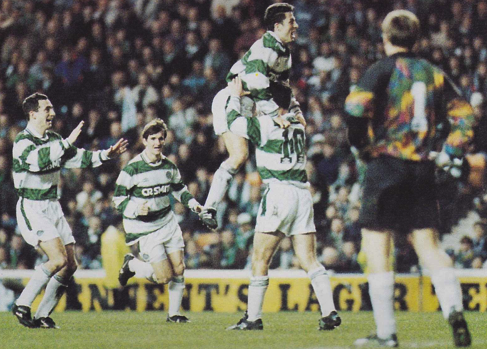 AIR WE GO…John Collins is hoisted high by Phil O’Donnell after firing in the second goal. Paul McStay and Tosh McKinlay are about to join in the celebrations. Hibs keeper Jim Leighton looks on in dismay.

Keith Wright gave the Hoops a fright by pulling one back, but it was all over when Phil O’Donnell bravely launched himself at a right-wing free-kick from Rudi Vata to send a header soaring past Leighton at his left hand side.

‘You’ll Never Walk Alone’ bellowed out around Ibrox as the Celtic players celebrated at the final whistle. Burns summed up, ‘I know what will be said. Here we have Airdrie, another First Division team, and back in November we lost to Raith Rovers in the League Cup Final.

‘Believe me, we have learned from the experience of losing in that game and we don’t intend for it to happen again. This was a victory which pleased me. It was something the players deserved and something the support deserved for the way they have backed us.’

Airdrie had already put down a marker by dismissing Hearts in the semi-final, but it is also worth noting their result against Raith Rovers in the quarter-final. They travelled to Stark’s Park and inflicted an impressive 4-1 battering on Jimmy Nicholl’s team. 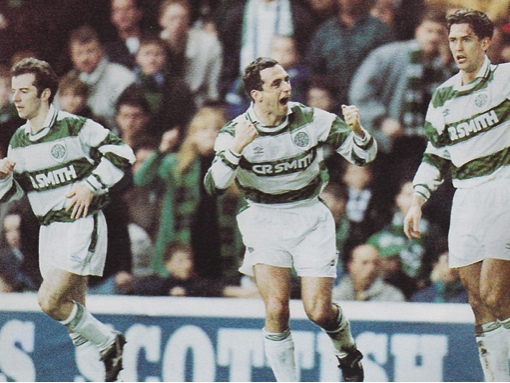 They had already beaten Stirling Albion (2-1) and Dunfermline (2-0) to make it through to the last eight. Their style of play may not have been easy on the eye, but manager Alex MacDonald, a ‘bite-your-ankles’ type of midfielder in his playing days at St.Johnstone, Rangers and Hearts, had fashioned an outfit that undoubtedly realised its limitations and played to its strengths.

Up front, they had two old-fashioned frontmen who weren’t afraid to mix it with rival defences. Andy Smith and Steve Cooper threw themselves at every high ball whether they had the slightest hope of making contact or not. In Alan Lawrence, the Broomfield side had a slight, evasive winger who liked to come inside and support the front two.