Celtic Quick News on News Now
You are at:Home»Exclusive Series»EXCLUSIVE: WELCOME BACK TO CELTIC: THE TOMMY BURNS STORY (Part One)
By CQN Magazine on 12th July 2022 Exclusive Series

It was an emotional and controversial homecoming for the Hoops legend as he left Kilmarnock in acrimonious circumstances to take over from the sacked Lou Macari. Celtic were accused of ‘tapping’ the boss while he was in charge at the Ayrshire club and fined in the region of £100,000 by the SFA.

However, chief executive Fergus McCann viewed the fans’ favourite as the ideal professional to lead the club out of the doldrums after last sampling title success with Billy McNeill’s team in 1988, the club’s centenary year.

In another CQN EXCLUSIVE series, we chart Tommy Burns’ career as the Hoops gaffer during turbulent times on and off the field. Here is the first instalment from Alex Gordon’s tribute book, ‘The Winds of Change’, which was published by CQN in 2015.

CELTIC’S league form during Tommy Burns’ first season in charge was nothing short of an embarrassment. The team careered wildly from catastrophe to calamity. Chaos lurked in every fixture, despair was a weekly condition. Mishap followed setback; grief piled upon misery.

Admittedly, the team would not have been aided by the fact they did not play a game at Celtic Park while the stadium was being totally rebuilt and Hampden Park became ‘home’ for the campaign. Nevertheless, the final Premier Division table was x-certificate material as far as the downcast support was concerned.

Reconstruction had trimmed the league from 12 teams to 10 and three points would now be awarded for a win. Burns’ team hobbled into fourth place with 51 points from 36 games, shedding an alarming 57 points in the painful process.

Rangers collected the crown for the seventh successive campaign, 18 points ahead of their fiercest rivals. Motherwell and Hibs also had the luxury of looking down on Celtic.

I’M IN CHARGE…Tommy Burns brought back to Celtic by Fergus McCann in July 1994.

Unbelievably, Burns saw his players fail to win a solitary match in the months of October and November. The shambolic run was only halted on December 18 when, mercifully, goals from Peter Grant and Andy Walker defeated Falkirk 2-0 in Glasgow. The club had set an all-time appalling record by failing to register a victory in a woeful sequence of 11 games – three lost and eight drawn – as they were summarily and disdainfully dismissed as genuine title contenders long before the turn of the year.

It was grim stuff for despondent, weary followers brought up on flair and adventure.

Celtic failed to score a solitary goal on 10 occasions and their highest total was three which they managed in one game, the 3-0 triumph over Rangers at Hampden in the third last outing of the campaign when it was far too late and the trophy was already destined for Ibrox.

The team claimed two strikes in 11 other outings and one on 14 occasions. In total, Celtic notched 39 goals, just a decimal point better than one a game. The top league marksman was John Collins with eight strikes. Jimmy McGrory once scored eight goals in one game against Dunfermline in 1928. 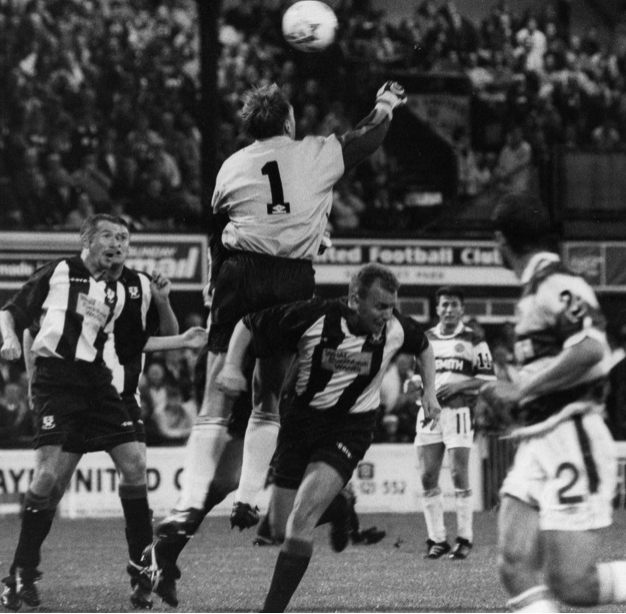 AIR RAID…Celtic keeper Gordon Marshall punches clear in the 1-0 win over Ayr United at Somerset Park at the start of the 1994/95 season.

Between them, Pat Bonner and Gordon Marshall combined to concede 33. The League Cup – masquerading under its latest guise as the Coca-Cola Cup – proved to be another disaster area ultimately providing one of the most shocking outcomes in Celtic’s history.

And, yet, when the final whistle shrilled on the last day of the season, Paul McStay and Peter Grant, unashamedly, wept tears of happiness as they led the merry band who cavorted around Hampden Park in the midst of the most joyous scenes the national stadium had ever witnessed following a nail biting Scottish Cup Final success against an Airdrie team well up for the occasion and the challenge.

However, there was a fairly harrowing season to endure before Celtic reached that wonderful stage of exultation.

There was expectation in the air when Celtic kicked off their League Cup campaign against Ayr United at quaint Somerset Park on Tuesday August 16. I spoke to the First Division side’s manager Simon Stainrod before the tie and he was quite happy to reveal he would be keeping his tactics simple; the Celtic defence could expect a sustained aerial bombardment throughout the ninety minutes.

Stainrod, who was quite a classy middle-of-the-park performer with Queens Park Rangers and Aston Villa, among others, during his playing days, abandoned his previous values and had transformed a tiny part of Ayrshire into the ‘Land of the Giants’. 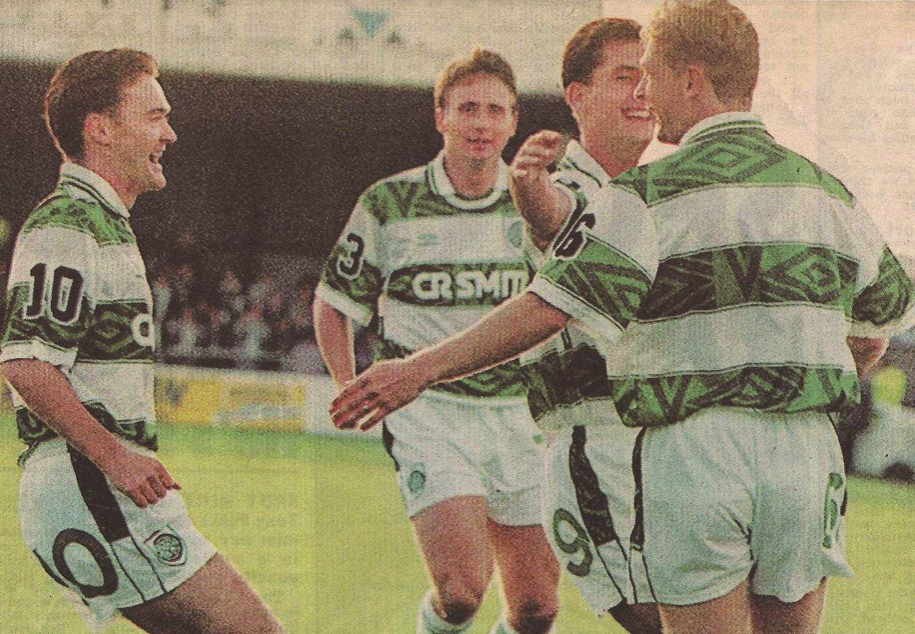 He had assembled a fearsome line-up of six-footers with his burly striker Ian Gilzean, son of former Scotland international Alan, as his squadron leader. Stainrod promised that ‘Celtic will know they’ve been in a game’. He didn’t need to draw any pictures.

I attended the game along with Pat McGinlay, sidelined through injury, and Stevie Archibald, my old mate who knew a thing or two about the more scientific approach to the beautiful game after playing for Scotland, Spurs, Barcelona and Aberdeen under the guidance of Jock Stein, Alex Ferguson, Terry Venables and Johan Cruyff.

We wondered what to expect that balmy evening. Peter Grant scored early on and, despite frantic and monotonous high balls thrown haphazardly into the visitors’ penalty area, Tony Mowbray, Mike Galloway and Mark McNally held firm. It wasn’t pretty to watch, but it was progress.

Next up, was the altogether more intriguing encounter against Dundee at Dens Park just over a fortnight later. Paul McStay has a reason to remember a towsy, rough-and-tumble affair on Tayside – he was sent off for the first time in his career. Thankfully, it didn’t impact on the final outcome of 2-1 in favour of Burns’ side. 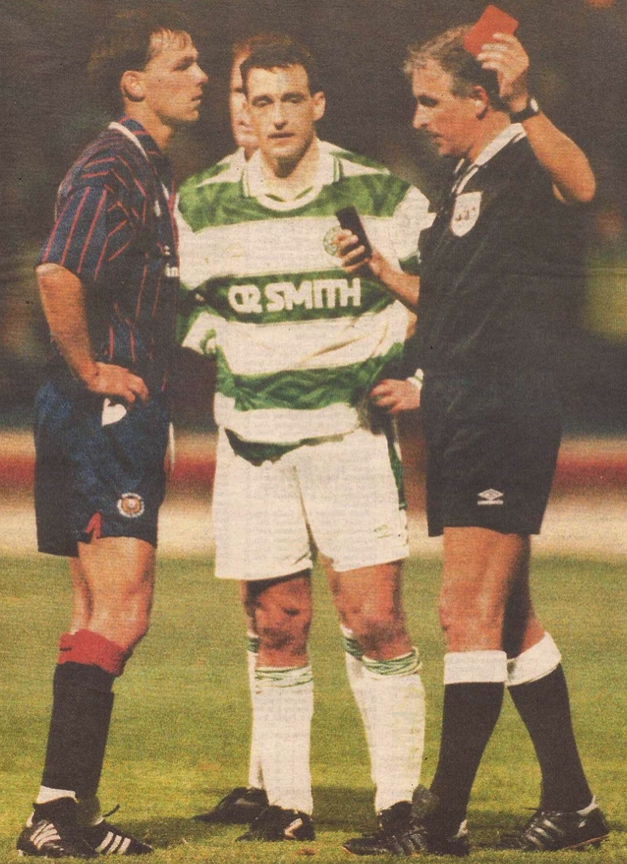 SEEING RED…Paul McStay is sent off along with Dundee midfielder Dusan Vrto by referee Jim McCluskey after an flashpoint incident in Celtic’s 2-1 win over Dundee at Dens Park.

Before the game, there had been intense media speculation about Arsenal pondering a £3million bid for John Collins, a hefty fee in 1994. Fergus McCann earned more kudos with the Celtic support by ordering the club to take the unusual step of issuing an official denial. In short, Collins was staying put.

Certainly, the rumours, informed or otherwise, didn’t blur the focus of the elegant midfielder and he emphasised that point with the opening goal in the eighth minute, a magnificently-struck left-foot angled drive from 25 yards that hurtled into the top corner with French keeper Michel Pagaeud a spectator. However, some slack defensive play allowed Ray Farningham to nullify that effort with a glancing header from a Neil McCann cross in the 19th minute.

It was stalemated until 12 minutes from time when Andy Walker, who had just returned to the Scotland international set-up, provided a virtuoso reason why he was back in favour. The dapper little attacker collected the ball in the middle of the park and embarked on a slalom-like run through the retreating Dundee defence before sliding in the winner.

Referee Jim McCluskey had the distinction of flashing an unwanted debut red card at Celtic skipper Paul McStay who was banished along with Dundee’s Czechoslovakian tough guy Dusan Vrto. A newspaper report put it thus, ‘The defender held back McStay as he bore down on goal and, as both players got to their feet, McStay made contact with his opponent.’

I suppose we could read between the lines. There was no appeal from Celtic and McStay served his punishment. Equally, there were no complaints from manager Tommy Burns.

WALLOP…John Collins thunders in an unstoppable left-foot shot against Dundee at Dens Park.

Celtic were given the opportunity of completing a Tayside double knock-out when they were paired with Dundee United on September 21, this time the tie being played at the national stadium in Glasgow. Ivan Golac, who had lost out to Liam Brady for the manager’s job in the summer of 1991, was now in charge at the Tannadice outfit with Jim McLean, at last, gravitating from dug-out to boardroom as chairman.

Golac had succeeded in bringing the Scottish Cup to the club in his first year, beating favourites Rangers 1-0 with a Craig Brewster goal. McLean had failed in six previous attempts to annex the silverware.

A solitary goal four minutes from time by John Collins in a quarter-final tie watched by 28,859 fans made certain Golac wouldn’t be adding the League Cup to the national trophy on his CV. The Yugoslav, in fact, was sacked in March the following year and never returned to Scotland with his managerial travels taking him to Iceland, Serbia and Ukraine. It had been a strange year for United as they were relegated for the first time since the inception of the Premier League in 1975. 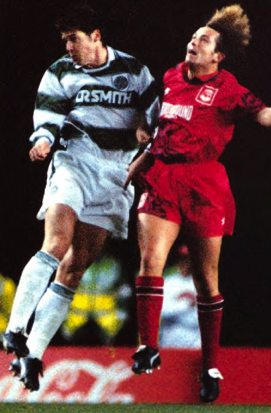 Aberdeen had managed a goalless draw against Celtic in Glasgow on league business on October 8 before they returned for the League Cup semi-final later in the month. The game was played at neutral Ibrox and it was a nerve-shredding head-to-head.

Pittodrie gaffer Willie Miller was under pressure to deliver in his third year in charge and the League Cup looked his best bet for silverware. The former Dons favourite had seen the club knocked out of Europe at the first stage by the Latvians of Skonto Riga and the mood of the support was turning against him. How quickly in football heroes can become zeroes.

The last-four encounter plodded its way to a goalless ninety minutes with both teams failing to ignite. It was obvious one goal was going to settle such a finely-balanced confrontation.

With the clock ticking down, Brian O’Neil threw himself at a high cross, outjumped everyone in the packed penalty box and flashed an unstoppable header high past the flailing Theo Snelders.

Celtic were in the Final where they would meet First Division side Raith Rovers at Ibrox on November 27. The Kirkcaldy outfit had struggled against Airdrie in their semi-final at McDiarmid Park and had to rely on penalty-kicks to advance on a 5-4 shoot-out victory.

Tommy Burns was now 90 minutes from Celtic’s first trophy success in five years. Despite indifferent form in the league, the Parkhead men were massive favourites to stop the rot against Jimmy Nicholl’s mixture of journeymen and eager youngsters.