The players would have had a light training session at Lennoxtown today as muscles continue to refill after Wednesday night’s exertions. Expectations of Celtic in the Champions League are not high, and were exceptionally low when this group was drawn, but even so, these games have a huge financial, physical and even emotional impact on every area of the club.

One argument suggests the last thing we need is a cup semi-final four days after a Champions League outing. An alternative thought is that this is the perfect game for Celtic right now. Memories linger of sitting stressfully at Fir Park days after Celtic beat the reigning European Champions, Milan, as (subsequently liquidated) Grenta held onto a lead until the 87th minute.

While playing (subsequently liquidated) Rangers away 64 hours after winning a Uefa Cup semi-final 1200 miles from home in 2003 proved to be the perfect game to instil steel into the legs.

With what passes as a fully fit squad, Brendan has choices to make for Sunday. Did Patrick Roberts do enough off the bench against Borussia to justify a start? Perhaps. He’s a player who owes us one at Hamden too.

Callum McGregor will also fancy his chances ahead of Nir Bitton, who didn’t have a great Scottish Cup semi-final against the same opponents in April.

It would be a huge surprise if Moussa Dembele didn’t start as the lone forward, despite Leigh Griffiths itching to get on alongside him. Brendan will not change formation for this game, while Moussa will fancy his chances against a defence he punished to ruthlessly last month.

For me, our two most important players on Sunday will be Scott Sinclair and Tom Rogic. They are the epitome of the modern footballer, strong, skilful, intelligent and difficult to defend against. If we can get them on the ball often enough we’ll score a lot of goals.

Pretty much every Celtic fan I know expects Mark Warburton to have learned a lesson from his Celtic Park whipping and for him to deploy a more defensively-minded team this time. My Newco pals don’t expect this to happen. Warburton hasn’t varied his game-plan since arriving at the club and is apparently reluctant to start experimenting now.

He took his team to Hampden to face Celtic against similarly long odds last season. Within minutes we knew we were in a game, and despite the clear chasm between the teams, it was Newco who faced Hibs in the Scottish Cup final.

A repeat of the 5-1 win at Celtic Park is possible, but you’ve seen enough football to know that nothing can be taken for granted on Sunday. Remember that Newco came close to levelling that 5-1 game at 2-2 early in the second half, and the latter part of their collapse came after going down to 10 men. 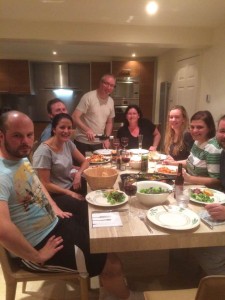 I’m off later to meet those from the Tyneside No. 1 and friends, who have walked (yes, WALKED), from Merthyr Tydfil and will reach Doherty’s Bar in Hamilton this afternoon. They’ve pretty much walked a marathon a day for 13 days and will make the final journey to Celtic Park tomorrow.

This herculean effort has been made to mark the memory of Jonathan Thomas, who aged 30 lost his biggest fight one year ago tomorrow.

We’re lucky as Celtic fans that we get to meet and read about people who do these things in our name. It’ll take you 2 minutes to let them know how inspiring they are here.

It’s also worth marking the events in Aberfan, the village a few miles from Merthyr Tydfil which was visited by unimaginable tragedy 50 years ago today.

John Humphrys: What we owe the people of Aberfan 50 years after tragedy struck the village, and why it shows authority must be challenged. pic.twitter.com/OdjyaAGTsQ