OLIVIER NTCHAM has described his winning strike against Steven Gerrard’s Ibrox side as being “a special moment”.

The French midfielder netted the only goal of the game at Parkhead on Sunday to give the champions a deserved victory.

Ntcham had earlier seen a netbound shot deflected onto the crossbar by keeper Allan McGregor – the third time the Hoops had hit woodwork before his 62nd-minute effort that made the difference.

The £4.5million buy from Manchester City last summer said: “It was a very nice game to play in and to win it was fantastic.

“The atmosphere was very special, too. The fans were amazing and I think they knew a goal was coming from the way we were playing.

“We played very well and we deserved to win the game. We created some very good chances and we could have scored some goals.” 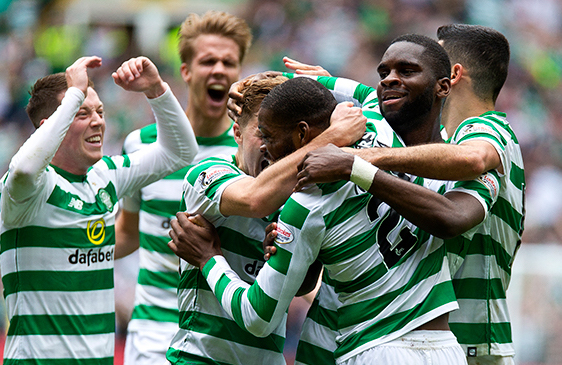 THAT WINNING FEELING…Olivier Ntcham is congratulated by his Celtic team-mates after his strike.

The hard-working midfield man claimed nine goals last season on the way to the club’s historic double treble and the points-clincher at the weekend was the fourth of this campaign.

He added: “It’s a special moment, it’s always special to score against this team, so it’s good. It’s been a very good start for me personally and, thankfully, I’ve been able to help the team.

“Our performance has improved with each game and we are feeling very positive and happy.

“To end the week like we have is nice. To have three points is excellent, especially going into the international break.”