Celtic Quick News on News Now
You are at:Home»Latest News»FALLON GETS MEDAL – 52 YEARS ON
By CQN Magazine on 30th April 2019 Latest News

CELTIC hero John Fallon has been reunited with his European Cup medal after a wait of FIFTY-TWO years – thanks to chief executive Peter Lawwell.

On and off the pitch at Parkhead on Saturday, it was an emotional day in the east end of Glasgow.

Jozo Simunovic headed in the only goal of a tense encounter with Kilmarnock in 67 minutes and seven seconds to honour club legend Billy McNeill who had sadly passed away the previous Monday at the age of 79 following a long and courageous battle against dementia.

Fallon was introduced to the crowd before kick-off alongside other Lisbon Lions Jim Craig, John Clark, Bobby Lennox, Bertie Auld and Charlie Gallagher. 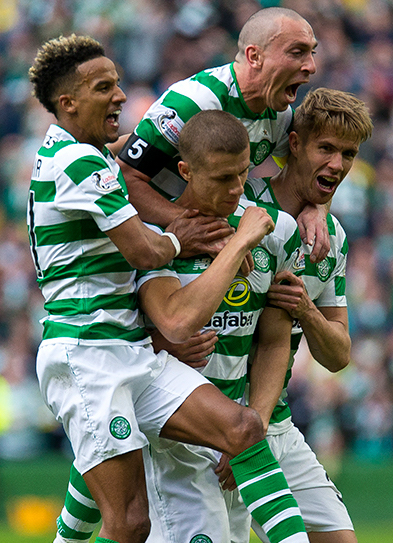 PARADISE…Jozo Simunovic mobbed by delighted team-mates after his winner against Kilmarnock.

The ex-shotstopper had been back-up to Ronnie Simpson on the European Cup run against Zurich (5-0 agg), Nantes (6-2), Vojvodina (2-1), Dukla Prague (3-1) and he was on the bench again in the Portuguese capital when the Hoops became the first British team to conquer Europe when goals from Tommy Gemmell and Stevie Chalmers, who passed away yesterday at the age of 83, brought the trophy to Parkhead on May 25 1967.

Afterwards at the presentation dinner, Fallon’s medal went missing, but has since been donated back to the club and returned to its rightful owner.

A delighted Fallon, speaking to Celtic TV, said: “It feels great to be reunited with my medal. I’ve got to thank Peter Lawwell and everyone at Celtic for going to all this effort and finding the medal that was lost.

“I did get a replica one at one point, but it didn’t seem the same.

“It was such a surprise, I got a phone call about a month ago from John Clark telling me that Peter wished to see me. He told me the story of how the medal had been found, so I was very proud to receive it and it adds to the collection.”