CELTIC assistant boss John Kennedy reckons the Hoops players have received even more backing from the supporters since the departure of Brendan Rodgers last week.

The fans were fuming at the swift exit of the Irishman at such a crucial period of the season with the unprecedented treble treble within touching distance with the possibility of only FOURTEEN games to be played before bringing down the curtain on a historic campaign.

However, Rodgers, with over two years to run on his lucrative contract, walked out and took over mid-table Leicester City with his backroom staff of Chris Davies, Kolo Toure and Glen Driscoll following him.

Twenty-four hours later, Neil Lennon had accepted the role on an interim basis and led the champions to a 2-1 win over Hearts at Tynecastle and followed that up by guiding the players to a 2-0 Scottish Cup quarter-final success at Easter Road three days later. 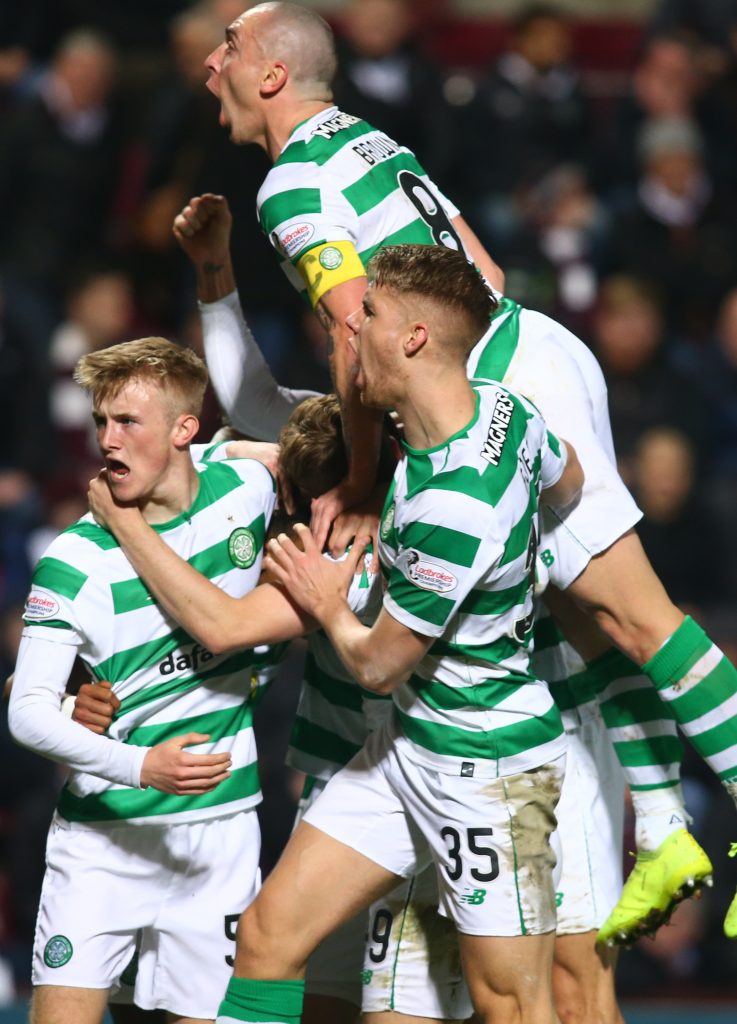 TREBLE YELL…Scott Brown celebrates with his team-mates following the first goal against Hearts.

Kennedy, who has been promoted from his first team coaching role in the management shake-up, believes the Hoops have fed off the extra backing they have received from raging fans.

He told The Celtic View: “What I’ve noticed in the last week was the fans are disappointed and a bit angry. But it’s worked in the players’ favour because they’ve had the support and a really strong backing from the fans.

“There always is here at Celtic. but there’s an extra bit here just now.
“We’ve all felt it around the place and the players have fed off that, especially going away to Hearts and Hibs where it’s always difficult.

“Hopefully, on Saturday against Aberdeen, it’ll be a great atmosphere that the players can thrive on.”

* Kennedy was speaking in the this week’s Celtic View, on sale now.