FERGUS McCANN has added his praise to the tributes to John Keane, who retired as Director and Honorary Chairman of Celtic yesterday.

The former Hoops owner, speaking on the club website, said: “I just saw the news of John Keane’s retirement. The club owes – and I owe – John Keane a great debt. He was a major and steadfast partner in the rescue and rebuilding of Celtic.

“His commitment never wavered, from long before and during its darkest hour and later, when the hard decisions and hard work had to be  done. Unlike some others who promised support then fell away, John was always there.

“He avoided the limelight, never claimed credit, and continued to financially support the growth of the club without seeking personal profit. His special interest was the development of young players – and that has served Celtic well with years of onfield success.

“Like Brother Walfrid, he came from County Sligo in the ‘Oppressed West’ of Ireland. And he left his mark in a different way. Like every true supporter, he understood what Celtic means and its importance to so many people – and was there when it counted.”

The champions made the announcement yesterday of Keane’s retirement and highlighted the fact he should forever be regarded as one of the club’s saviours and all Celtic supporters owe John an eternal debt.

In the 1990s, an immediate £1million was needed to save Celtic from the ignominy of administration. To avoid such a catastrophe, John pledged this amount to the club. Thanks to John’s contribution, trading was maintained, the wages were paid and administration was averted. The rest is history.
John then went on to back Fergus McCann’s takeover with further crucial investment.

John served as a non-executive director of Celtic for well over 20 years and his crucial role was recognised at Celtic’s AGM in 2013, when he was confirmed as the Honorary Chairman.

In August 2013, John was given the honour of unfurling the League Championship Flag. 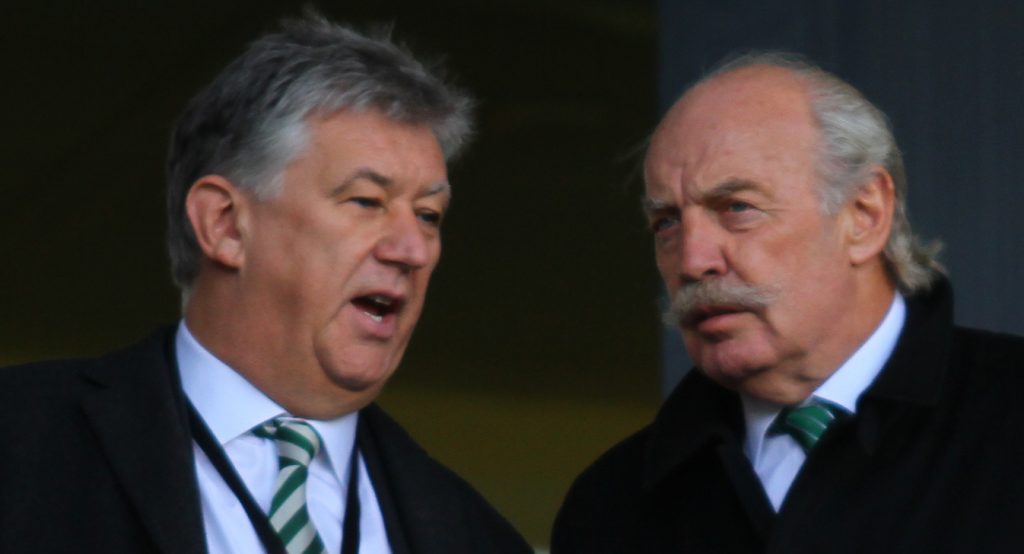 Chairman Ian Bankier, in a club statement, said: “When the Club’s very survival was in doubt, John was there to play a crucial role and he is someone who should forever be regarded as one of the most important figures in the club’s history.

“I know with John standing down from the Board, our supporters will take this opportunity to applaud the fantastic contribution of a great Celtic man and join me in wishing him well on his retirement.

“I know, too, that John will continue to support the club as passionately as he always did. John will always be a friend of the club and we sincerely thank him for all he has done for Celtic.”

Dermot Desmond commented: “John has been a lifelong, passionate and steadfast supporter of our great club. He came to Celtic’s rescue in its hour of need. I wish John well in his retirement and thank him for his enormous contribution.”

Celtic Chief Executive Peter Lawwell said: “I would like to thank John sincerely for all he has given to the club over such a long period. He has been a tremendous friend and support to me personally, but, above all, he is a man who put the club ahead of anything else.

“He made such a wonderful contribution to Celtic in the 1990s – ultimately a gesture which saved Celtic – and ever since has been a hugely important part of the club’s fabric.

“A man always with the best interests of Celtic at heart, across more than two decades, he has provided invaluable support and counsel to the club. As Celtic supporters, we all owe John an enormous debt of gratitude for everything he has done for the club, in protecting our continuity, in preserving our history and ultimately in bringing Celtic to where it stands today.

“We all wish John, Kathleen and the whole family all the very best for the future.”

John Keane added: ”It has been an honour and privilege to be part of Celtic, a club I have loved so dearly all my life. I would like to thank Dermot Desmond, Ian Bankier and Peter Lawwell and all other directors, past and present, who have worked together and so tirelessly in the best interests of the club.

“I also wish to pay tribute to all other staff at the club and, of course, our supporters who give so much to Celtic and make it the wonderful institution it is today. I will always be a Celtic supporter and I wish the club nothing but continued success for the future.”