CELTIC contribute HALF of the outfield players in the Premiership Team of the Season as voted by the SPFL.

The champions, as expected, had five stars named in the elite line-up with Cameron Carter-Vickers taking a centre-back role, skipper Callum McGregor and the departed Tom Rogic in midfield, with Kyogo Furuhashi leading the attack and Flipe Jota on one of the flanks. 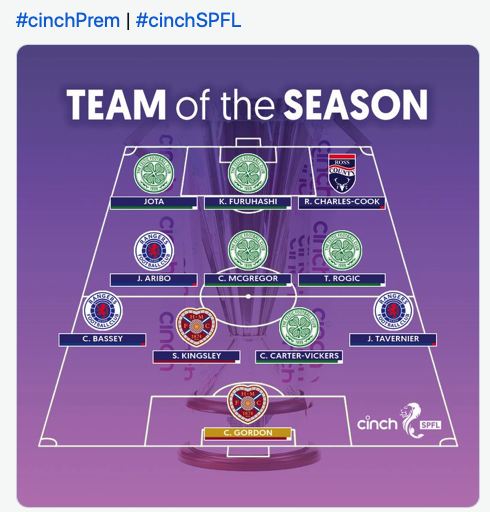 Ex-Hoops No.1 Craig Gordon got the nod for the goalkeeper’s slot and his Hearts team-mate Stephen Kinglsey is possibly a surprise inclusion alongside Carter-Vickers in the middle of the rearguard.

The only player from outside the top three is Regan Charles-Cook. The 25-year-old goalscoring winger had a superb campaign at Ross County and his form earned a move to Belgian side KAS Eupen at the end of his contract.