ONE down and seven to go as Celtic got off to a winning start in Bosnia on their march to the riches of the Champions League group stages.

Neil Lennon’s men edged towards the second qualifying round after this deserved first leg victory over FK Sarajevo at a rain-lashed Olympic Stadium.

They gifted their opponents a goal of a start before demonstrating their true grit qualities to just about kill the tie as a serious contest with strikes from Mikey Johnston, Odsonne Edouard and Scott Sinclair.

Barring a disaster, the Hoops have rendered the return game at Parkhead a week tomorrow as a mere formality.

The heavens opened as the eight-in-a-row champions kicked off season 2019/20 in earnest.

Scott Bain had to look sharp in the sixth minute to block a close-range attempt following a swift counter-attack. New Bhoy Boli Bolingoli-Mbombo thought he had done enough to play his opponent offside – and it looked as though the Belgian had a case – but the ref waved play on and the Hoops keeper reacted well.

A minute later, Darko Lazic became the first player to be booked following a cynical foul on Ryan Christie.

The underfoot conditions were giving the players problems, especially Edouard who found difficulties in attempting quick turns in tight situations.

Bolingoli-Mbombo showed a glimpse of why the Hoops paid £3million to Rapid Vienna when he stormed down the left and delivered an inviting cross, but the defence cleared as Edouard lurked menacingly.

In the 29th minute, disastrous defending gifted the Bosnians the advantage when Celtic’s back lot made a mess of attempting to clear a left-wing corner-kick.

Scott Brown failed to get his head to the cross smack in front of goal and the second ball fell to unmarked Croatian Mirko Oremus who gleefully drilled it beyond the exposed Bain.

It was an awful goal to concede, but the Hoops responded well with the equaliser six minutes later.

Jaunty Johnston, who performed well in the pre-season games, fought ferociously for possession with three defenders converging on him as he came in from the left. He shifted the ball to his right foot before lashing an unstoppable 25-yard drive high into the keeper’s top right-hand corner of the net.

Moments later, Edouard combined with James Forrest to send the winger through, but his effort off the outside of his right boot swept over the bar.

The champions were now in control and Christie and Callum McGregor had drives from outside the area without reward.

The half-time whistle came as a relief for the home side with the Parkhead outfit looking to capitalise upon their possession and composed play.

TWO…Odsonne Edouard prepares to hit the deck as his shot sails into the net.

It was no surprise when the Hoops eased ahead six minutes after the turnaround. Edouard was the scorer, but a large slice of the credit went to Kristoffer Ajer who quickly turned defence into attack as he surged forward purposefully.

The Bosnians were alarmed by the giant Norwegian’s burst of pace and Christie had a touch as the ball was worked onto the £10million Frenchman, threatening on the edge of the box.

Edouard sauntered forward, weaved away from a couple of challenges and, with his customary nonchalance and elegance, switched the ball to his left and lofted an effort into the inviting net.

With 12 minutes to go, Sinclair came on for Forrest with Morgan, who looked lively, moving across from the left to the opposite flank. 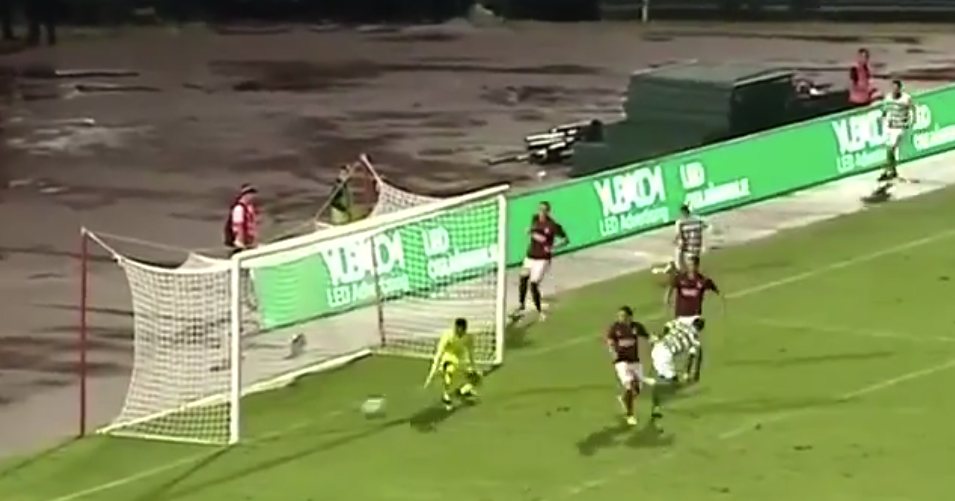 THREE…Scott Sinclair shows a flash off class with his back-heel following a neat cross from Lewis Morgan (extreme right).

In the 85th minute, it was all over as Morgan skipped down the right before pitching in a perfect cross.

Sinclair read the ball perfectly and collected the headed knock-on from Christie before cheekily back-heeling an effort into the net from five yards.

Edouard might have scored a fourth in the fading moments, but his finishing drive was straight at a relieved keeper.

No-one was complaining at the end, though. Job done.