Celtic Quick News on News Now
You are at:Home»Football Matters»FLETCHER KEEN TO BE A BHOY
By CQN Magazine on 14th January 2016 Football Matters
STEVEN FLETCHER will snub a tax-free cash windfall in China – if Celtic make their expected move.
The 28-year-old Scotland international striker is a free agent at the end of the season and can quit Sunderland on a Bosman.
Hoops boss Ronny Deila could even snap up the former Hibs hitman on a pre-contract deal to make certain he joins the SPFL champions for nothing in the summer. 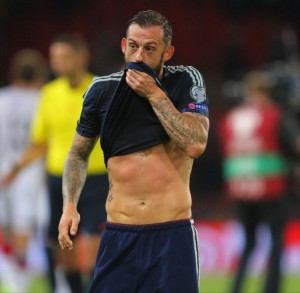 However, big-spending Far East outfit Shanghai Shenhua could make a shock move for the player who has scored 23 goals in 86 Premier League games for the Wearsiders.
They have already signed former Chelsea attacking duo Didier Drogba and Demba Ba and are likely to conclude an £8million deal with Newcastle midfielder Cheik Tiote within the next week or so.

Celtic have been long-term admirers of the 25-times capped Fletcher, who cost £12.5million from Wolves three-and-a-half years ago, and were interested before the start of the season.

However, they were unable to match the frontman’s wages, believed to be in the £40,000-per-week bracket, a figure that can be comfortably met and topped by the Chinese outfit who are owned by the megabucks Greenland Group.
Fletcher, though, is more interested in joining Celtic seven years after they failed to match Burnley’s £4million fee that took him south from Easter Road.
Sunderland are joint second bottom of the Premier League alongside Newcastle and could be tempted to allow the frontman to leave on a cut-price fee with the threat of him walking away for free in June.
Meanwhile Sheffield Wednesday have been told they will have to pay £3.5million for former Celtic striker Gary Hooper.

The 27-year-old frontman has been on loan at Hillsborough from Norwich City since October and his deal expires on Sunday.

Ex-Carrow Road boss Chris Hughton paid £5million for Hooper when he lured him from Parkhead in July 2013, but his successor Alex Neil has snubbed the player this season.

The Englishman, who cost £2.4million when he joined the Hoops from Scunthorpe United in July 2010 and scored 63 league goals in 95 appearances, has been linked with a return to the champions.

However, his wage demands of £32,000-per-week will scupper any chance of a move back to Scotland.

Wednesday’s Portuguese Head Coach Carlos Carvahal is pondering making the move permanent, but realises he will have to meet the East Anglian side’s asking price.

Hooper doubled his goal tally from 18 games with the Owls when he netted a double in his side’s 3-2 win over Bolton in midweek to send Neil Lennon’s team plummeting to the foot of the Championship, three points adrift of second bottom Charlton.