Celtic Quick News on News Now
You are at:Home»Latest News»FOLLOW THE LEADER: CALMAC’S ‘SUPER PROUD’
By CQN Magazine on 12th May 2022 Latest News

CALLUM McGREGOR realised he would have to step up to the plate when he was named Celtic skipper.

The 28-year-old midfielder was tasked with taking over from club legend Scott Brown when the multi award-winning veteran onfield leader left for a player-coach role at Aberdeen last summer.

Incoming manager Ange Postecoglou didn’t hesitate in passing on the coveted armband to McGregor – and how the Greek-Australian gaffer has been repaid by the Glasgow-born boyhood Hoops fan. 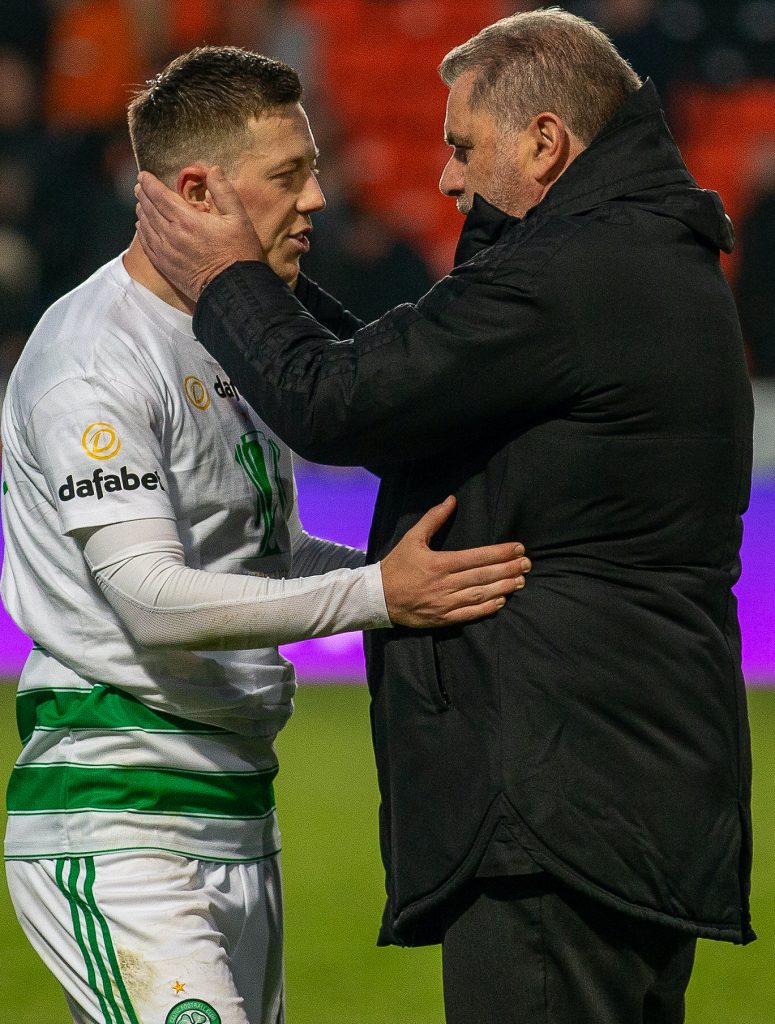 THAT’S MY BHOY…Callum McGregor is congratulated by Ange Postecoglou at Tannadice.

The dynamic performer has led from the front to oversee a truly remarkable change in fortunes at the club after last season’s wretched campaign had seen them inexplicably collapse as they limped in an unacceptable 25 points adrift in their failed attempt to make history with a tenth successive championship.

However, that awful memory was obliterated after the 1-1 draw with Dundee United at Tannadice that saw McGregor pick up his SEVENTH title-winner’s medal – and his first as skipper to follow the Premier Sports League Cup honour he received in December.

The Scotland international anchorman said: “When I was handed the armband, I knew it was my responsibility to bring success back to this football club.

“I’m hugely proud. It’s something I’ve dreamed of as a young kid, just to get in the first team and play a game. And then the journey’s progressed every season and you just always want to get better and always develop as a player and as a person.

CHEERLEADER…Callum McGregor applauds the celebrating Celtic fans after the 1-1 draw.

“I’m so happy and so delighted for everyone that we’ve managed to do that.

”It’s brilliant. I’m super proud of this group of players, the management staff, everyone at Lennoxtown.

“Everyone really came together in a sort of period of transition for the club. And to achieve what we’ve achieved this season is nothing short of tremendous.”

Asked if this latest victory was extra special, McGregor, speaking to STV, answered: “In terms of circumstances, yeah. I mean, a new group of players, so many new players coming in. And again, testament to them, they’ve hit the ground running.

“You know, pretty much everybody to a man has made an impact and that’s what we need. So, it was a huge rebuilding job off the back of a disappointing season. 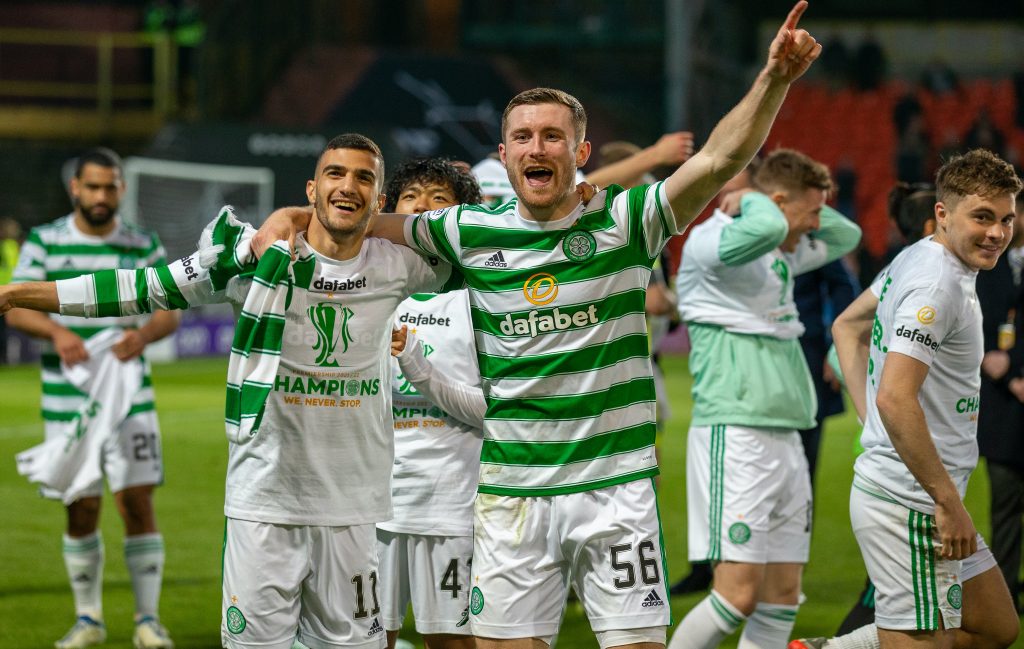 TWO FOR THE ROAD…Liel Abada and Anthony Ralston celebrate a remarkable title triumph. James Forrest looks quite happy, too.

McGregor added: “Absolutely delighted, this group of players deserve it so much.

“The fans were unbelievable again, as they have been all season

“We were a little bit off it, but all the hard work was done and it was a case of getting over the line.”

Now the scene is set for a monumental party as Ange, Cal and the Bhoys bring down the curtain on a mesmerising campaign when Motherwell visit Paradise on Saturday.

And then the celebrations will really begin!