Iain Gillies grew up in a fishing village called Mallaig in the Highlands of Scotland. As a child he’d play football with fishing net corks because no one owned a proper football. But his dream was to play for Celtic. As a teenager playing in the Highland League in the mid-1950s, he was spotted by a Celtic scout and soon he was at Parkhead, rubbing shoulders with football greats such as Jock Stein, Charlie Tully, Bobby Collins, Alec Boden and Bobby Evans and being coached by Celtic legends Jimmy McGrory and George Paterson. Iain Gillies was only to have one season in Paradise. But he’s dined out on it for the rest of his life… and he’s even written a book about it. 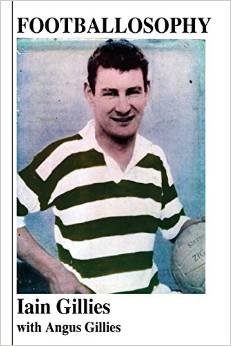 Iain spent one season at Glasgow Celtic as a teenager before being given a free transfer. That one sentence includes the most proud and most heartbreaking experiences of his life. But he is still Celtic through and through. After the knee injuries that curtailed his career at Celtic threatened to stop him playing football altogether, he became a newspaper reporter and ended up being the editor of the Gisborne Herald in New Zealand for 30 years. He also resurrected his football career, playing and coaching at Gisborne City for decades and making the New Zealand team in 1967. Gillies has won several national journalism awards in New Zealand and has the record as the longest-serving editor in the country. He is now retired and spends most of his time watching football on TV, drinking coffee with his family and friends at McDonald’s in Gisborne and looking after his ever-growing tribe of Scottish-English-Irish-Maori-Tongan-Fijian grandkids and great grandkids. He still watches the local football games at the weekend and lives in poised anticipation for the next frustrated coach to turn and say, “Iain, we’re short. Can you go in goal.”

Iain’s son Angus wrote the book and his daughter Elaine is certainly proud other combined efforts.

“This is the story of my father’s dream of playing for Glasgow Celtic,’ she stated. “The young boy from Mallaig, a small fishing village in the Highlands, lived his dream thanks to his love of the beautiful game. The path to Parkhead was paved with hardship, but with his can-do-attitude Dad had tunnel-vision. A knee injury didn’t stop him and in 1967 he was vice-captain of the New Zealand football team. And he also had an amazing career playing in New Zealand’s national league. The book is a great read as Dad is a master wordsmith having worked at the Gisborne Herald for over 50 years as reporter, chief reporter and editor and my brother Angus Gillies, who wrote the book, has many sporting biographies to his credit. Two natural storytellers bring to life this incredible journey. This is a dream many young boys share. With talent, belief and determination anything is possible. Dad turns 80 next month and he is still involved in coaching his six-year-old grand-daughter’s team.”

We have a limited number of copies of ‘Footballosophy’ available now at www.cqnbookstore.com  which have been supplied by the Gillies family.