Celtic Quick News on News Now
You are at:Home»Football Matters»‘FORGET MY GOAL,’ CIFTCI
By CQN Magazine on 2nd July 2016 Football Matters
NADIR CIFTCI dismissed his first goal for Celtic this year after netting in the 2-2 draw against NK Celje on Thursday.
Instead, the forgotten frontman, who spent the second half of the season at Turkish outfit Eskihesispor, insisted the pre-season friendly against the Slovenian opponents was all about working on fitness levels.
Ciftci, who scored his last goal for the Hoops when he netted a double in a 3-0 win over St Johnstone in Perth on December 13, realises the importance of being ready when the competitive action begins. 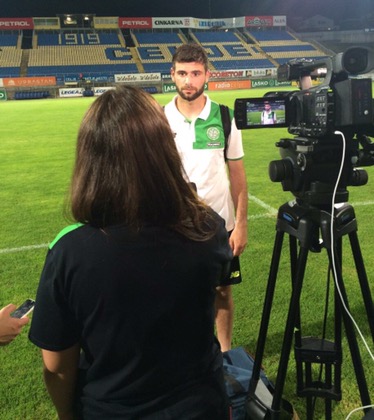 He said: “We had two chances in the first-half and we could have scored a few more in the second-half to win the game.

“But it was the first game back to get used to each other again and get the fitness back, so it was good.

“It’s always good to get a goal, but the most important thing is to get the fitness back, to do the right things that the manager asks on the pitch.

“To get a goal was great, but we were 2-0 down at the time and it was a really good attitude from the boys to get back to 2-2.”

The Hoops hitman, who joined in a £1.5million move from Dundee United just under a year ago, wore a black armband in memory of those who died in the in Turkey earlier this week, when terrorists attacked Istanbul’s Ataturk Airport, killing 44 people and injuring 240.

Ciftci added: “It was for the people back home in Istanbul. What happened there was very sad and it was just something I wanted to do myself in memory of all the people there.”