Celtic Quick News on News Now
You are at:Home»Football Matters»FORGET SEVCO, WHAT ABOUT RANGERS MISERY – TEN AND OUT!
By CQN Magazine on 5th July 2017 Football Matters
SEVCO RANGERS fans are still reeling after last night’s sensational defeat from Luxembourg part-timers Progres Niederkorn.
The Ibrox side waited six years to get the chance to play in Europe  and just like their former club, budgets and business plans have been formed around progressing to the group stages. Now Sevco are out after only three hours of football against a team that had never won in Europe before.
Their fans have been on the receiving end of shock reverses over the years and if it’s any consolation to them they can look back at some of the humiliations that the old club endured before finally kicking the bucket in 2012.
That in itself may never have happened had Ally McCoist been able to see off Maribor or Malmo…
Here are 10 of the old Rangers’ most humiliating results.
2008: FBK KAUNAS 2, RANGERS 1. Champions League 2nd Qualifier.
Just 83 days after Rangers reached the UEFA Cup Final, they crashed to an awful defeat in their-then 52-year European history after losing a lead to the Baltic minnows, who netted the winner with four minutes to go.
2007: RANGERS 0, LYON 3. Champions League Group stages.
It was hard to believe the Ibrox side had won 3-0 in France in the first meeting with goals from Lee McCulloch, Daniel Cousin and DaMarcus Beasley. They were completely outclassed and overturned in Glasgow as Lyon coasted to victory.
2006: RANGERS 0, ST JOHNSTONE 2. CIS Insurance Cup QF.
Rangers collapsed to a new low in a dreadful season as a Steven Milne double sparked demonstrations outside Ibrox when Paul le Guen’s men were outplayed and outfought. Le Guen left shortly afterwards.
1996: GRASSHOPPERS 3, RANGERS 0. Champions League Group stages
Rangers went into this match in an optimistic mood after a 10-3 aggregate win over Russian side Vladikavkaz in the qualifier. The Swiss burst their bubble by thrashing the ball past Andy Goram three times.
1995: RANGERS 0, JUVENTUS 4. Champions League Group stages.
Another night to forget in Glasgow as the Italian superstars went goal crazy. Billy Thomson had to pick the ball out of the net four times in a one-sided affair. The Ibrox men had lost 4-1 in the first game in Turin.
1987: RANGERS 0, HAMILTON 1. Scottish Cup Rd 3.
The Graeme Souness revolution finished with a first title success for nine years, but not before John Lambie’s side – who would finish bottom of the SPL – stunned Rangers with an Adrian Sprott strike.
1980: CHESTERFIELD 3, RANGERS 0. Anglo-Scottish Cup, QF 2nd leg.
After a shocking 1-1 draw at Ibrox, Rangers travelled to Derbyshire and got thumped by Third Division Chesterfield, sparking a rampage by visiting fans. Ex-Ranger Phil Bonnyman scored a double and an Earnie Moss strike sunk John Greig’s men.
1967: BERWICK RANGERS 1, RANGERS 0. Scottish Cup Rd 1.
A GOAL from Sammy Reid sent the holders crashing out of the tournament at the first hurdle. Ibrox strikers Jim Forrest and George McLean never played again for the club and Berwick keeper Jock Wallace later became Rangers boss!
1960: RANGERS 3, EINTRACHT FRANKFURT 6. European Cup semi-final.
THE Ibrox side had been hammered 6-1 in the first leg and overworked goalkeeper Billy Ritchie conceded another six in a dismal night at Ibrox. The Germans lost 7-3 to rampant Real Madrid in the final!
1957: CELTIC 7, RANGERS 1. League Cup Final
BILLY McPHAIL netted a hat-trick as the Parkhead side humiliated their age-old rivals. Sammy Wilson opened the scoring in the 23rd minute with Neil Mochan adding a second. McPhail then went on the goal rampage with a trio, Mochan added another and Willie Fernie slotted in a penalty.  Billy Simpson got Rangers’ consolation. It could have been worse – Celtic hit the woodwork THREE times!
Hopefully that helps cheer them up. Anything else happening this morning? 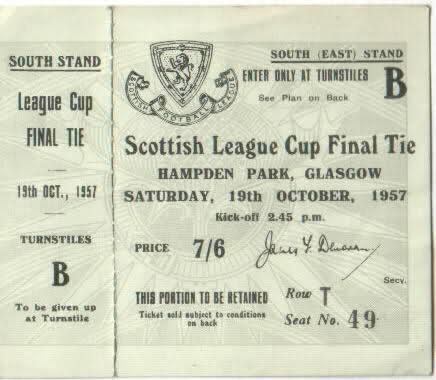